E-commerce giant sells Holiday Toy List sponsorships for as much as $2 million
READ THIS NEXT
Free Budweisers for the vaccinated, and ‘Vax Tee’ from Miller Lite: Trending 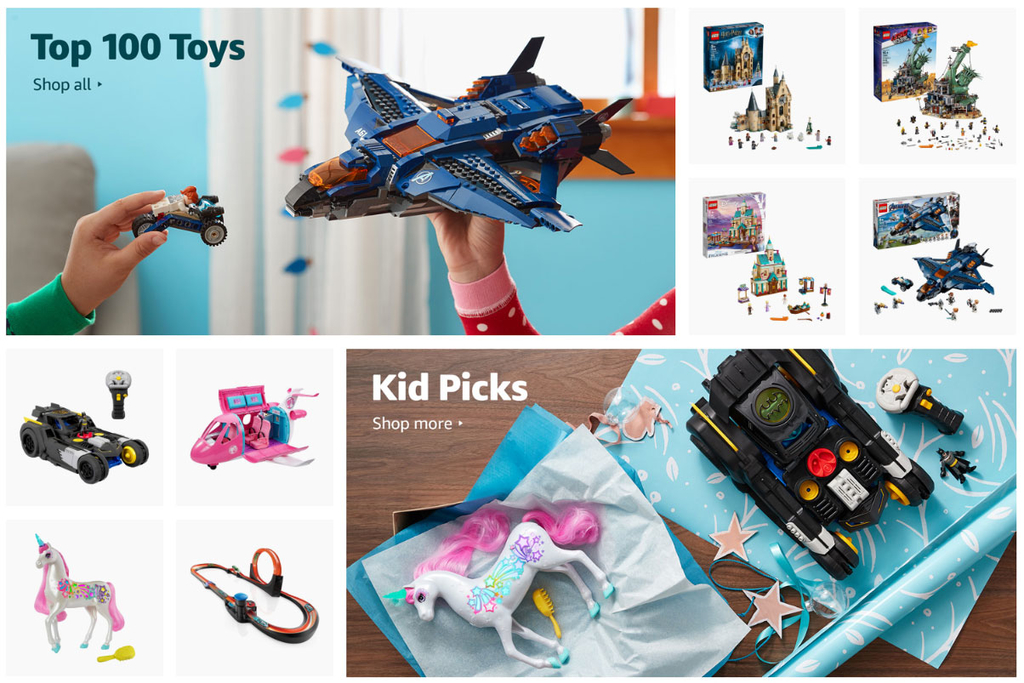 Amazon charges toy makers millions of dollars to be in its holiday gift guide.

What Amazon doesn’t mention are the millions of dollars it charges the toy industry just to be considered for a spot on the popular gift guide.

Amazon sells Holiday Toy List sponsorships for as much as $2 million, according to documents reviewed by Bloomberg. The more sponsors pay, the more products they can nominate to be on the list and the more prominently their own products will be featured on the popular website. Amazon aimed to sell at least $20 million in sponsorships for this year’s list, the documents show. Amazon also published a summer toy list with lower sponsorship prices.

It’s perfectly legal for Amazon to sell advertising on its site. It becomes a problem when the world’s largest online retailer tells shoppers recommendations are curated by experts but doesn’t disclose the money it gets from the toy industry, said Robert Weissman, president of the consumer advocacy group Public Citizen. Because consumers place more value on recommendations from independent sources, he said, companies prefer to keep their financial involvement hidden.

“They don’t write ‘paid ad’ on it because it completely changes how consumers perceive the information,” Weissman said. “If the list is entirely or in part paid advertising, people have a right to know.”

Amazon likened the payments it received to the money brands pay stores to be included in advertising circulars or to get prominent shelf space. In an emailed statement, the company said: “Every product on our annual Holiday Toy List, which features family gift ideas from new releases to customer favorites, is independently curated by a team of in-house experts based on a high bar for quality, design, innovation and play experience. We source product ideas from many places, including our selling partners who have an opportunity to nominate their best toys for the season and increase visibility of those toys.”

Gift lists are a time-tested way for toy manufacturers to stand out in the critical holiday rush when busy parents are desperate for ideas. Toymakers are eager to appear on these lists because the companies generate about half their annual sales during the holiday season.

Walmart Inc. charges toymakers $10,000 monthly per product to appear on its “Buyer’s Picks” toy list in November and December, according to documents reviewed by Bloomberg. The company produces other lists, including “Top Rated by Kids,” which uses feedback from children who test and rate more than 100 toys in July. Walmart and its toy suppliers partner to determine which 100 toys will be tested. Spokeswoman Leigh Stidham said suppliers and brands cannot pay to be included on the latter list, but didn’t comment on “Buyer’s Picks.”

Parents looking for independent recommendations can turn to toy lists produced by third-party reviewers such as Toy Insider and Toys, Tots, Pets & More (TTPM). But in an era when customer reviews can be gamed and social-media influencers push products without always disclosing that they’re getting paid, consumers sometimes struggle to distinguish between objective online recommendations and paid promotions.

The law is murky about precisely what should be disclosed and when. The Federal Trade Commission, which enforces deceptive advertising laws, issues general guidelines. A full-page magazine photo of a thirsty runner guzzling from a glistening bottle of Fiji water is so obviously an advertisement it doesn’t have to be disclosed. If the same water brand pays the magazine to publish what appears to be a news story about the health benefits of its product, it must be clearly labeled an advertisement so consumers aren’t confused.

While federal regulators are taking a closer look at advertising these days, they can’t possibly monitor all the promotional activity out there. So the FTC occasionally cracks down to send a message, as it did in 2017 with letters to more than 90 influencers and marketers reminding them about the need to disclose paid promotions in social media. The spotty enforcement presents a big gray area for the toy industry.

The lists are a powerful negotiating tool for retailers, according to industry insiders familiar with the process. Toymakers are led to understand that if they buy marketing space on the lists they will get bigger orders, the people said. Sometimes manufacturers get better visibility if they agree to sell a product exclusively through the retailer, they said. Retailers include only toys on the list that they are actually selling.

Lists are a fast-growing part of Amazon’s advertising business. Amazon holiday gift guides promoting toys, electronics and home goods combined to generate more than $120 million in revenue in 2017, up about 40% from the previous year, according to documents reviewed by Bloomberg.

What sets Amazon apart from other retailers is how much it charges for space on its toy page over the holidays. A narrow strip across the top of the web page costs $500,000 per month in November and December, up from $150,000 the rest of the year, according to documents reviewed by Bloomberg. A billboard ad atop the toys page runs $300,000 per month, up from $75,000 the rest of the year.

Similar spots atop Walmart’s toy page cost $180,000 in November and $132,000 in December. According to Comscore, Amazon generates about twice as much web traffic as Walmart, which could explain the discrepancy in pricing.

“When Amazon presents a top 100 toy list,” he said, “it’s a mistake to assume that shoppers understand this is just paid billboard space versus a list Amazon curated itself.”