BMW Films Is Coming Back -- But Does It Matter? | Ad Age
Skip to main content

BMW Films Is Coming Back -- But Does It Matter?

READ THIS NEXT
How the TikTok tension is affecting brands’ back-to-school campaigns
'The Escape' with Clive Owen and Dakota Fanning (trailer clip)
Credit: BMW Films

When BMW Films debuted in 2001, YouTube didn't exist, Mark Zuckerberg was 17 years old and tweeting is what birds did. Which is another way of saying a lot has changed in marketing. Branded content, then a novelty, is now everywhere.

So why should people care that the luxury automaker is bringing BMW Films back on Oct.23 after a 14-year absence?

"It's a fair risk," Hildegard Wortmann, senior VP for brand BMW, conceded in an interview. "Will it become popular again?" But she was heartened by the interest generated in September when BMW began teasing the return. "You could tell immediately, it is a big thing," she said.

It is also expensive. Ms. Wortmann declined to reveal the budget, but the cast alone probably did not come cheap. Clive Owen, who starred in the original, is reprising his role as "the Driver" in the new series, which is called "The Escape." Also on board are Dakota Fanning, Jon Bernthal and Vera Farmiga. To make the film, BMW assembled some of the creators of the original campaign, which came out of Fallon Minneapolis: Creative Director Bruce Bildsten, Executive Producer Brian DiLorenzo and creative consultant David Carter, who co-wrote the new film with director Neill Blomkamp. Anonymous Content's Eric Stern and Steve Golin, who were producers on the original round, also returned to produce the film. 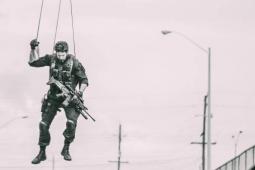 The original series, called "The Hire," included eight short films released over two seasons in 2001 and 2002. It is considered an advertising icon, winning the Cannes Lions International Festival of Creativity's first ever Titanium Lion. The series was also named to Ad Age's Top Campaigns of the 21st Century, hailed by one judge as "the first big media event of 21st-century marketing." It drew more than 100 million views at BMWFilms.com, which was considered a major achievement in pre-YouTube days.

But BMW will be hard-pressed to approach that kind of success today, said Peter Daboll, CEO of ad-scoring firm Ace Metrix. "BMW is exhibiting some creative bravery by relaunching the high-end, long-form sponsored content," he said via email. "You could say they were pioneers of the art form back in 2001-2 when there was little distribution. The key difference today is that long-form sponsored content is everywhere, so how can you get the audience? While potentially Cannes-winning quality, it is harder than ever to get viewers to pay attention more than six seconds—especially millennials."

"The challenge for BMW is to create something that will attract viewers," said Tim Calkins, a marketing professor at Northwestern University. "This is easier said than done. It is a cluttered world."

But Kit Yarrow, a consumer psychologist and author of "Decoding the New Consumer Mind," is bullish on the reprise. "They get massive quantities of retro-chic allure from the folks that remember BMW Films from a different era," she said in an email. "Plus, it really doesn't matter if people remember the films or not—sounds like they'll be as cool today as they were back then. So BMW gets a double-whammy of allure from those that remember and they're freshly cool to those that don't."

The first tease came from Ms. Fanning, who on Sept. 15 posted on Instagram a picture of herself sitting in the back of a car driven by Mr. Owen, calling it an "upcoming secret project with a mysterious driver." The post generated more than 28,000 likes. A 30-second teaser posted on YouTube on Oct. 2 had generated more than 98,000 views as of last week.

BMW enthusiasts seem excited, including Nico DeMattia, a writer at BMWblog.com, which is independent from the automaker. "BMW is back to showing off what its cars can do, showing the people that its cars are meant for driving hard and not just puttering around town," he wrote in a Sept. 20 post. "I can probably speak for all of us BMW fans when I say we're sick of the 'Connected Drive' and autonomous braking commercials. BMWs aren't about the gizmos and doodads that the driver can fiddle with. BMWs are for driving and acting like a bit of an ass in."

Still, BMW does not seem poised to make BMW Films a yearly campaign. Ms. Wortmann called it a "a one-off thing" that is meant to be an homage to the original. "I think it is special because it is building on an icon of 15 years and it's building on a very charming side of the brand," she said.