Kind, Nissan, P&G and others take part in the national conversation about gender equality
READ THIS NEXT
The Week Ahead: Roblox goes public and the Grammys are back 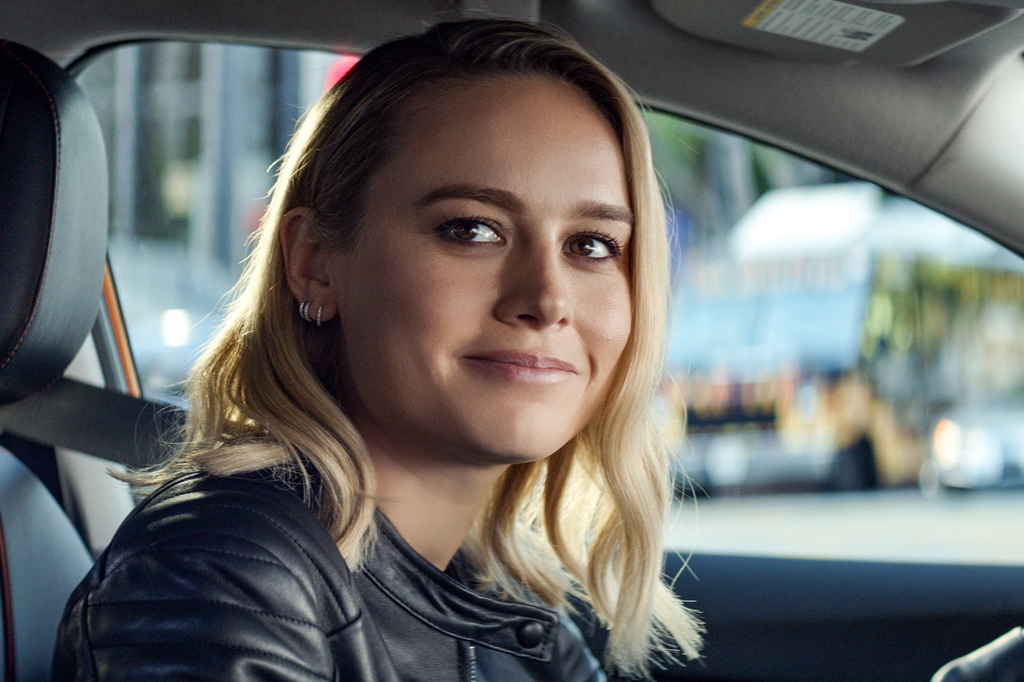 Brands’ efforts to support International Women’s Day have only ramped up in recent years, but this year holds more significance than others. It’s the 100th anniversary of women receiving the right to vote through the ratification of the 19th Amendment to Constitution. The anniversary stands as an important milestone that illuminates just how far the country still has to go to achieve gender equality.

In their campaigns this year, brands such as Kind, Nissan and P&G are focusing on female empowerment through the themes of workplace equality, authentic representation and the importance of highlighting the brave women who’ve made their mark on America.

Even though we are now celebrating the 100th anniversary of women’s right to vote, a future where women and men live in complete equality is still far off. The Equal Rights Amendment, which offers equal rights to all U.S. citizens, regardless of sex, was introduced in Congress in 1923 and has yet to be ratified. Kind Snacks is getting behind the effort to pass the amendment this International Women’s Day (Sunday, March 8) by launching an “Equality Bot” that allows people to reach out to their elected state officials to say they support the amendment’s ratification via texts.

“We wanted to have an actual activation that could make a difference,” says Elle Lanning, Kind’s chief of staff, who notes that the majority of the food maker’s employees, and more than one third of its executives, are women. “The team came across the stalled efforts of the ERA.”

On social, Kind is encouraging people to text “Pass the ERA” to 50409 to sign a petition that will then be sent to elected state officials.

The brand is also celebrating the 100th anniversary of women’s voting rights by selling a new limited-edition bar online. The bar is caramel almond and sea salt and sold in white, purple and gold wrappers (colors of the women’s suffrage movement) that read “Kind Equality.”

All sales from the bar, a minimum of $10,000, will go to the Alice Paul Institute, a nonprofit organization pushing for gender equality, named for the suffragist and author of the ERA. Kind plans to donate a minimum of $20,000 to the Alice Paul Institute, including proceeds from the bar as well as a $1 donation each time someone posts on Twitter, tagging @KINDSnacks, to show that they used the Equality Bot.

To celebrate the 100th anniversary of equal voting rights, we've launched our newest limited-edition bar, the KIND® EQUALITY bar. Through 3/31, as part of the KIND Snack & Give Back Project, 100% of proceeds will be donated to the @AlicePaulInstit: https://t.co/H5acFRRJmo pic.twitter.com/ZfJriYScH1

Nissan has tagged Oscar-winning actress and “Captain Marvel” star Brie Larson to lead a new campaign that aims to tackle issues of gender equality and female empowerment in the workplace. The campaign, called “Refuse to Compromise,” shows that women don’t have to “compromise” in the workplace—or with the brand’s new 2020 Nissan Sentra.

In a 30-second spot that launched on Twitter on March 6 and that will air on TV on March 11, a young professional woman is told by her boss that she won’t receive a promotion. At that moment, Larson pulls up in a Monarch Orange Metallic 2020 Nissan Sentra, and takes the woman for a drive, showing off the handling of the car and automatic breaking. Finally, Larson parks in front of the boss and poses: “So if this Nissan Sentra isn’t going to compromise, why should you?” The woman emerges from the Sentra with a new resolve, proclaiming “You’re right!”

Allyson Witherspoon, VP of marketing communications and media at Nissan North America, explains why the brand chose Larson as the face of the campaign: “Brie has reached incredible feats in a male-dominated industry because she refused to compromise at every step of the way.” Nissan worked with TBWA on the spot, which sits under Nissan United, a special team of Omnicom agencies set up to service the Nissan account.

In honor of the 100th anniversary of women getting the right to vote, Procter & Gamble has partnered with Time to recognize the 100 most influential women of the past 100 years. Women being honored, like Gloria Steinem, Margaret Thatcher, Aretha Franklin and Hillary Clinton, appear on their own covers and in a documentary, co-produced by filmmaker Alma Har’el’s production company JellyWolf and Time Studios.

A special edition of the magazine will also include a pullout of the 100 covers. P&G Chief Brand Officer Marc Pritchard says the project addresses the recognition gap in Time’s covers (Time has only honored four women standalone “Person of the Year”), and supports P&G’s current gender equality efforts like its corporate #WeSeeEqual campaign. Read more about the campaign here. 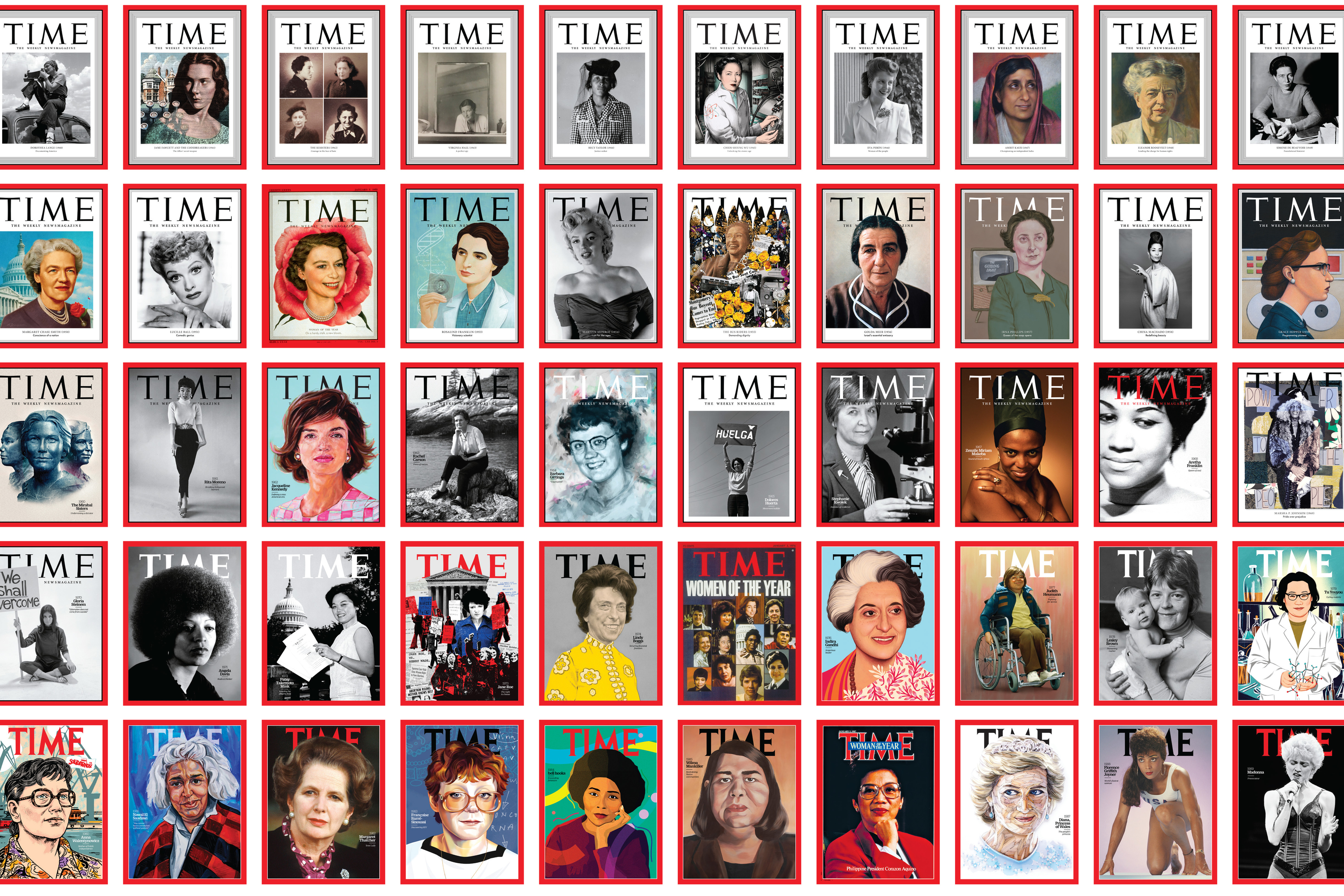 Last year, Yelp introduced the ability for businesses to mark that they are “women-owned,” and more than 72,000 U.S. business did so. Ahead of International Women’s Day this year, the online review platform has added the ability to search for businesses owned by women.

“We understand that consumers want to champion women entrepreneurs and know that their hard earned money is going into businesses they care about,” wrote Emily Washcovick, manager of local business outreach at Yelp in a blog post. Washcovick says that in the past year, the number of reviewers mentioning that a company is female-owned went up by 20 percent.

On its blog, Yelp has compiled a list of the top 100 businesses owned by women in the U.S., based on customer reviews and average ratings and will be sharing their stories on social media with the hashtag #WomenOwnedOnYelp. The platform also encourages people to share their favorite women-owned businesses with the platform as well. Yelp is also providing women-owned businesses window decals to display on their storefronts.

Since we launched the #womenowned attribute in 2019, 72,454 businesses have added the feature to their Yelp pages!

Genealogy site Ancestry is helping today’s women find out whether they are related to any of the brave suffragettes whose actions were critical to the passing the 19th Amendment to the Constitution. Ancestry is promoting its new “Make Them Count” site with a spot made in house. The website is filled with facts and articles about the suffrage movement and also highlights four women who were key to its success.

“Learning our ancestors’ stories gives them power,” said Jennifer Utley, director of research at Ancestry in a statement. "If you think about it, it’s very possible your great-great grandmother couldn’t vote. You can, and it’s because of the women who fought for your rights." Read more about it here.

As part of its new “Work Where?” campaign, retailer Banana Republic is challenging the traditional concept of the workplace by featuring women who are redefining the typical 9 to 5 and what they choose to wear to work. A series of videos, directed by the brand’s in-house Creative Director Len Peltier, highlights women like spoken word artist Chinaka Hodge who aren’t afraid to break boundaries in the workplace. “Work Where?” is being shared across Banana Republic’s social media channels as well as Hulu and We Transfer.

“As a brand co-founded by a woman, equality has always been at the heart of B.R. We continue championing female pioneers and lead a culture of equal advancement and the empowerment of women,” said Banana Republic Chief Marketing Officer Mary Alderete in a statement.

The retailer is also selling an all-white “empowerment suit,” meant to symbolize strong women. It’s seen worn by Hodge in a video where she performs her poetry. The jacket is being sold for $199 and the pants for $98.50. Banana Republic has also rereleased its “Notorious Necklace,” on sale for $98.50, which stands for equality and empowerment. On Instagram during International Women’s Day, Banana Republic will be giving away clothes with Hodge’s quotes on them to select followers.

On top of that, the brand is making a $100,000 donation to nonprofit CARE, which provides technical training and life-skill classes to women.

To promote the show during Women’s History Month and for International Women’s Day, the channel has partnered with Snapchat to create a national augmented reality lens that transforms the all-male faces on U.S. bills to that of “Motherland’s” female lead General Alder. The Lens, which was built internally with help from Snap’s Creative Strategy team, will run throughout March.

Shell is changing its name to "She'll" this International Women's Day, and all it had to do was add an apostrophe. The new branding is seen at a station in San Dimas, California (a site run by female Shell executives). The new logo will also appear on the gas company's social accounts on March 8. 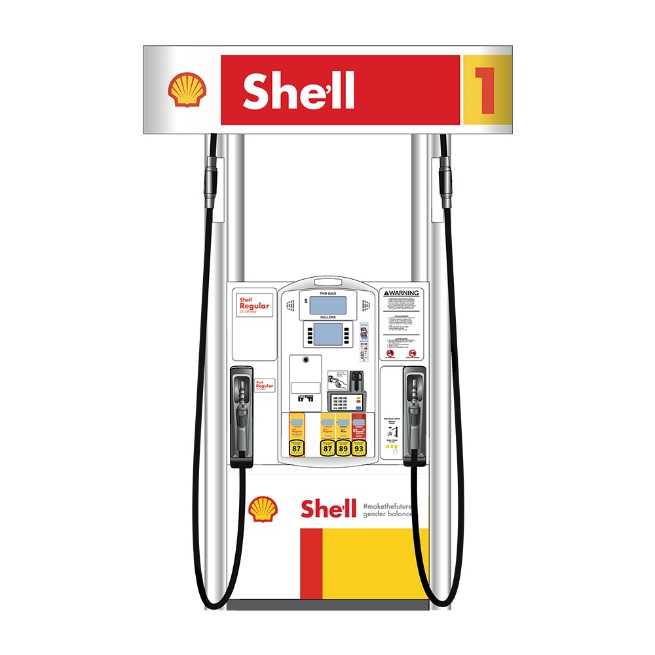 The new name is included in a spot from Wunderman Thompson Atlanta. The work, which is being shared across social, is called “She Will” and features some of Shell’s female employees. Faces of girls and women are paired with inspiring phrases like “She will be valued” and “She will be supported.” Then, the phrase “She will” is trimmed down to “She’ll" at the end, and viewers make the connection between the conjunction and the brand name.

“We hope that this campaign will continue to position Shell as a brand that supports and is invested in their female workforce,” says Carrie Philpott, president at Wunderman Thompson Atlanta. Women account for only 15 percent of the oil and gas workforce, according to the company. Shell has been working to expand the number of women in senior leadership roles. In 2012, the company its leaderships was made up of 16 percent women, and in 2017 that jumped to 22 percent, according to the company. It's the second time in the company's history where a female–Gretchen Watkins–is CEO.

Retailer Knix, which sells intimates like bras and leak-proof underwear direct from its site and via Nordstrom, is trying to change the conversation around age. For International Women’s Day, the retailer created a spot in house called “Who Gives a F*ck” to honor women over 50. The 60-second spot features 13 women, aged between 50 and 81, who spot the brand’s lingerie. It will run on Instagram on March 8, and a 15-second version will air next week on national TV.

“Our mission is to empower women to be unapologetic,” says Joanna Griffiths, CEO and founder of the Toronto-based brand. Read more about it here.