City Spotlight: Cincinnati is a lot more than P&G and Skyline Chili 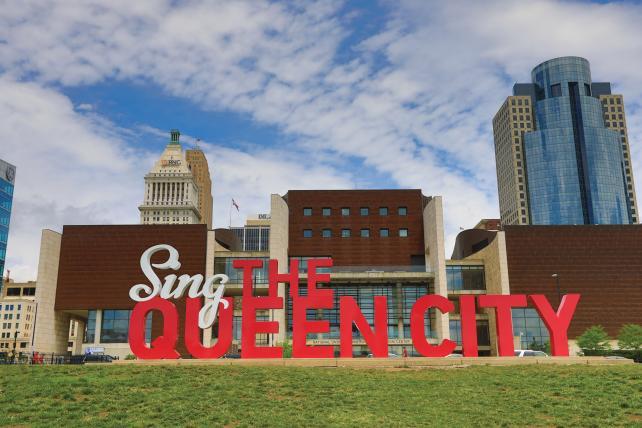 That wasn't meant as hyperbole.

This city in the heart of the country, where the living is cheaper and consumer sentiment is more representative of the country at large (or, say, the two coasts), is a draw for companies large and small. They include major corporations (Procter & Gamble, Macy's and Kroger are headquartered here), agencies, design firms, tech companies and startups. Together they're injecting renewed energy into a city already flush with new hotels, a new Major League Soccer team and a revitalized urban core.

Brandemonium is being held here again (Oct. 2-4), and Bill Donabedian, organizer of the event—which has more than 100 speakers—isn't concerned that it overlaps with New York Advertising Week. His attendance is on track to reach or exceed the roughly 1,000 who attended last year, he says, at a badge price just below the base cost for the New York event.

"How do you compete?" asks Donabedian. "You don't. It's what you can offer that New York can't."

A little over a decade ago, you could roll a bowling ball down the sidewalks of downtown Cincinnati at night without hitting a soul. No longer. People are returning to Cincinnati's urban core and, along with them, a hopping nightlife.

Much of this is due to the Cincinnati Center City Development Corp., a nonprofit backed by local businesses in 2003. The group spurred development of Over-the-Rhine, a scenic 19th-century German neighborhood. The 3CDC also secured funding to rehab OTR's Washington Park, which was where heroin addicts could once be found nodding off on benches. Now it's a family-friendly urban playground with a dog park, weekend art fairs and mass yoga classes.

Alex Tosolini, who left P&G as VP of global e-business four years ago, spurned offers from around the country, opting to stay in Cincinnati as senior VP of new business development at Kroger.

"The city has much more to offer than most people know," says Toso-
lini. "It has the offerings of a big city without the complexities."

It's easy to point to the world's biggest advertiser as the reason for Cincinnati's growth. But in addition to P&G and other big players like Macy's and Kroger, there's media company E. W. Scripps, Japan's Kao (its North American headquarters is here), the major operations of General Electric, and small and emerging players like Pure Romance, the Tupperware of sex toys. It boasts 30,000 sales representatives—5,000 of whom converged on Cincinnati this year for a convention.

Like many places in flyover country, Cincinnati wants to be a bigger player in the tech industry. Unlike others, it just landed a top global digital marketing executive to lead that effort: Nestle's Pete Blackshaw. Blackshaw is the incoming CEO of startup hub Cintrifuse, a public-private partnership whose mission is to attract more tech players to the Greater Cincinnati area.

There's already a strong marketing technology focus in the city, thanks to companies such as Ahalogy, an influencer marketing network that sold earlier this year to Quotient. Another local player is Lisnr, which moves data across devices through ultrasonic signals to back retail marketing and other uses. And Kroger runs a data-based marketing agency called 84.51.

Cincinnati is also a draw for design shops. It houses LPK, the largest marketing-services firm in the city with 190 employees, along with WPP's Landor and Omnicom's Interbrand. LPK Chairman Jerry Kathman says there's not an aisle of any supermarket in the world where a Cincinnati design shop or brand consultancy hasn't "helped birth or burnish a brand franchise."

Experiential firm Agar, set to increase revenue 30 percent this year according to CEO Josh Heuser, is another fast-growing presence. It grew from an event promotion business and may be best known for Blink Cincinnati, a light projection show across two miles of the city expected to return next year. Local shop Curiosity, which handles Roto-Rooter, Cincinnati Bell and P&G venture work, has made the Inc. 5000 list of fastest-growing companies four years running.

Empower, a media agency co-founded by Mary Beth Price, has been expanding its scope as a creative media agency under her son, Jim Price. The shop has won creative assignments in the past year from Formica, Jack Links and Kao's John Frieda and Curel.

Cincinnati is also drawing talent like Rob FitzGerald, who formerly ran We Are Social in New York. In August he joined Empower as chief operating officer. "There's a buzz about the city," says FitzGerald, comparing it to Portland, Oregon, and Austin, Texas. "It's part of this whole maker, artisanal resurgence."

CORRECTION: An earlier version of this article incorrectly stated that Jack Links is owned by Conagra.

1 P&G Plaza
The tower's disks were where the man-in-the-moon logo was supposed to go in the '80s—until rumors linking it to Satan worship stopped the plan. Really.

1014 Vine St.
The company's headquarters are here, and a supermarket is (finally) coming downtown.

655 Plum St.
Some weren't thrilled about the sex-toy company moving in.

100 W. 5th St.
The name derives from the longitude of its office.

302 W. 3rd St.
It took over the old Possible headquarters to get closer to P&G, but still hasn't changed the name on the building.

659 Van Meter St.
Perched on the edge of Mount Adams, it has a great view of the JACK Casino.

15 E. 14th St.
Modern on the inside, it took longer than planned to get this old OTR building in shape.

35 E. 7th St.
This shop is housed in the former Playboy Club.

700 W. Pete Rose Way
The street was named before the Reds star was banned from baseball and did time for tax evasion.

(aka OTR, the area north and east of Central Parkway and south of McMicken Avenue and Liberty Street)
The gentrifying German neighborhood stands atop a network of tunnels once used by breweries.

1330 Monmouth Ave.
A neon-lit walk through the history of outdoor advertising.

44 E. 6th St.
Zaha Hadid did the 2003 reconstruction, making it the first major U.S. museum to be designed by a woman.

It took a decade for this zone between the Reds and Bengals stadiums along the Ohio River to be developed, but it's now a nightlife hub.

643 Vine St.
Skyline Chili is widely regarded as current best of breed in a city famous for its "three-way" chili: spaghetti topped with a watery mix of ground beef and Mediterranean spices with grated cheese.

609 Walnut St.
Part of a small chain of boutique "museum hotels" (think art in the lobbies) known for its penguin sculptures.

Aka the Cincinnati Bell Connector, the streetcar runs only two miles but has done its intended job of driving up property values in OTR

The John A. Roebling Suspension Bridge to Covington, Kentucky

This looks uncannily like the Brooklyn Bridge because, well, it was the prototype, designed by John A. Roebling in 1866.

Lime and Bird scooter rentals have come to downtown. Ride them on the sidewalks and you can be fined $100.