What to expect at this year's ANA annual conference 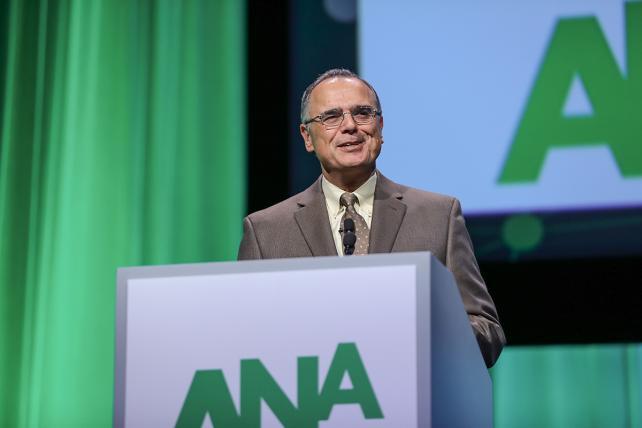 It's been a year since the Association of National Advertisers gathered in Florida for its biggest annual event, and to quote Kelly Clarkson—who will entertain at this year's gathering—a lot has happened since u been gone. Data privacy legislation is sweeping the world, and the FBI is now involved in a criminal investigation into agency media-buying practices. In short, there's a lot to talk about for the 3,000 industry execs who will crowd the sold-out Rosen Shingle Creek in Orlando for the 2018 Masters of Marketing event, which begins Wednesday. Below, a primer.

The feds are watching

Please raise your hand if you want the FBI to investigate your media deals. The ANA recently confirmed reports that the FBI has asked for cooperation in its probe into media-buying practices, but since the ANA doesn't have any direct information (per its deal with K2 Intelligence, which did a 2016 report on the subject), it's asking members if they wish to cooperate. The question is, who will want to?

Manuel Reyes, CEO of consulting firm Cortex Media, said in a recent ANA blog post that the feds can access records auditors have trouble getting, like transactions with a holding company's overseas affiliates, or into financial records of vendors. Yet while the issue has been hot for a few years, it has so far produced only one high-profile lawsuit (Uber v. Fetch). Marketers have largely made the rounds of assuring their bosses that nothing is wrong on their accounts by doing audits, and if problems were found, they've been settled quietly. So how eager will marketers be to get the feds involved with criminal investigations of their media transactions, especially since any investigations would likely continue for years after they've moved on to their next jobs and may not directly put any money back in their budgets?

While an FBI investigation is disconcerting, particularly for the agencies, ANA members are nervous about other issues, including GDPR and state privacy legislation, at least judging by the conference agenda. Douglas Wood, ANA general counsel, is set to tell marketers they have good reason to be worried, because the European privacy law can have impact elsewhere, and because state privacy laws that are in some respects tougher could make it hard to do digital business in the U.S. Facebook, Google and others have begun to lobby for a federal privacy law that would presumably be less restrictive and preempt state laws, but that's far from a done deal.

Marketing conference fatigue is real. But the ANA does not have a demand problem. Organizers expect 3,000-plus attendees, up from 2,476 last year. The event remains a must for big-name chief marketing officers and the agency execs and other vendors looking to get a piece of their multimillion dollar marketing budgets.

"I've always considered the ANA to be the Willie Sutton of conferences," says Michael Kassan, CEO of MediaLink, referring to the robber who famously said he robbed banks because that's where the money is.

On the public agenda, the ANA is upping the ante this year by adding a second stage. But the size of your ad budget does not necessarily dictate the pecking order. For instance, L'Oréal and Unilever execs are relegated to the second stage at the same time that upstart genetics-testing marketer Ancestry presents on the main stage.

On the heels of the ANA's latest report tracking the skyrocketing rise of in-house agencies, many marketers are feeling the pressure. The report, published earlier this month, said that 78 percent of ANA members surveyed have some sort of in-house agency, up from 58 percent five years ago. Jeff Charney, CMO of Progressive Insurance, which has long had its own internal agency, and Warren Marenco Chase, VP and COO at 140, the 1-year-old agency inside Verizon, are both speaking. The heat is on for CMOs to expand and grow their own marketing departments ... and then deliver the results.

"Growth" has been a theme of Masters of Marketing conferences for 10 years running. But just because it's a theme doesn't mean it's happening. At last year's event, ANA CEO Bob Liodice lamented that 259 companies in the 2016 Fortune 500 had declining growth. "Pardon my Brooklynese, but growth sucks," he said, partly blaming inefficient digital ad spending. With the economy roaring this year, will marketers paint a rosier view of growth? Or will they make more excuses?

A final plea to ANA presenters: Keep it fresh. The agenda reveals several execs slated to cover similar territory from previous events, like Advertising Week and Cannes. We won't name names, but you know who you are.