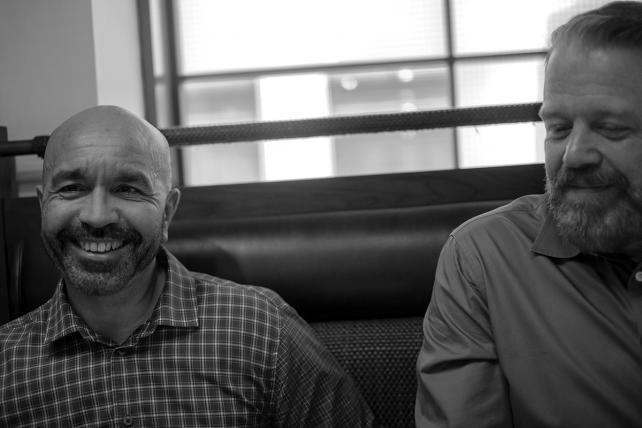 On the surface, tomandlorenzo.com is a fashion blog enamored with celebrity style, particularly of the red-carpet variety. But Tom Fitzgerald and Lorenzo Marquez, the now-married duo who began the blog in 2006 as a "Project Runway" fansite, have far more in mind: They offer up frank, sometimes impolitic, but never personal commentary that breaks down the symbiotic relationship between high-end fashion, Hollywood and marketing.

Along the way, the brand has expanded to include a book, "Everyone Wants to Be Me or Do Me," and a podcast, "Tom & Lorenzo's Pop Style Opinionfest." Admirers include Emmy-award-winning costume designer Janie Bryant, who has said she loved their "Mad Men" recaps, which focused on character development through Bryant's costume design.

Bottom line, though, Fitzgerald and Marquez are great entertainment. It's hard to resist writers who describe Johnny Depp, who's into bandanas, chains, doo-dads and eyeliner, as an "elderly gay wind chime." Our conversation has been edited.

To start with the serious, Marchesa co-founder Georgina Chapman said she's leaving her husband, Harvey Weinstein, who's been accused of sexual harrassment. How will this affect her fashion brand?

Lorenzo: No one knew much about the company before they married, then her brand exploded. There were [rumors] he told actresses to wear Marchesa. I think people will distance themselves. But then it'll be back on the red carpet—people forget. And maybe there will be a movement to embrace her.

Tom: I think it comes down to how she manages her PR. She could weather this, she has a base that's very well established, whether people have been pressured into wearing the gowns or not.

Why is the red carpet so important for a luxury fashion brand?

T: Those pictures are picked up everywhere. And look at the backdrop and count the corporate logos. People don't realize how much money is on the line.

L: And red carpets sell movies. Studios and networks have a budget to dress celebrities—they understand it's important.

T: Marvel movies, Star Wars—that's Disney money. When "The Force Awakens" came out, the female stars dressed in black or white, very Darth Vader-Princess Leia. Their stylists didn't tell them to do that.

L: Pretty much everybody gets paid to wear a dress if you have a stylist—and jewelry and shoes. Or you wear it for free. But then you have to give it back.

T: A lot of times A-listers don't return things, we know that.

L: That's why they're always wearing the wrong season—designers want to advertise the next collection. When it's spring, they're wearing fall.

Most consumers can't afford the clothes these stars wear, so what's the marketing strategy?

L: When you hire someone like Kristen Stewart, who represents Chanel, people aren't buying Chanel dresses, they're buying sunglasses, earrings, keychains. That's what sells. People see her and think, "OK, what can I afford here?"

T: The average Chanel consumer is middle-aged, and this is how a brand like Chanel gets it out there to a younger generation. In 10, 15 years, they'll have good memories of Chanel, maybe even have a few pieces, and they'll buy the suit or the shoes.

Who's a good celebrity brand ambassador?

T: Kirsten Dunst is doing very well with Rodarte. It was always goofy, experimental stuff, but they've gotten more Hollywood in the past year.

L: They've been trying to rebrand themselves on the red carpet.

T: She comes off as an atypical blond ingénue. And she gives off an intellectual vibe. She could be an idiot for all I know, but it works well for Rodarte.

T: It's a living headshot. You're presenting this flawless image of yourself for casting directors or producers to see.

Are clothes, one's look, the best way for a celebrity to rebrand?

L: I think so. It's all about image. Look at Celine Dion, she's like a mega-transformation. She went from this very basic look to this crazy fashionista wearing Gucci all the time.

L: Every publication followed her in Paris [this past summer, when she attended Fashion Week shows]. She was clever. She was getting forgotten in a way.

T: And then her husband died and this may sound crass, but from a public image perspective, you don't want to be seen as someone's widow. She didn't just say, "I'm going to start wearing Gucci."

Which male star is brand-building correctly?

L: Chris Pratt changed his image. He wanted to make action movies and had to change his body.

T: He was the goofy frat boy who would lift his shirt and show his belly. I understand, he's getting older and you can't do those sorts of things, but he made a clear choice. Now he's walking away from his wife and kid, and everyone's trying to be polite about it, but he'll step out with some supermodel or 25-year-old actress. I'm not a psychic predicting this.

Is there too much focus on celebrities in fashion? On the corporate side, too, like Pharrell Williams being named head of imagination at G-Star Raw?

L: We're so focused on celebrity right now, even models are the daughters and sons of major celebrities—Gigi Hadid, Kendall Jenner. [Fashion houses] are interested in selling what they have by using famous people, not in creating new fashion.

Will we see a course correction?

T: The bubble will pop. It's similar to the '90s when it was all about supermodels. The industry snapped back. There was a similar backlash with fashion bloggers. The money is in fashion. It'll happen when Kanye's next line collapses, or someone else's makes no money. We'll never get celebs completely out, there's money to be made, and we have been told by many fashion editors that a celeb on their cover will sell 25 percent more than a model.

There's a sameness in the way people dress, even creative directors. Is it a lack of imagination?

T: I'm not the person to lead this conversation, but there's a sense of cultural stagnation. [Fashion brands] are selling perfume and sunglasses, no reason for them to change. Men's suiting hasn't changed in 25 years. And really, what's the difference between Banana Republic and the Gap except a little bit of quality? And H&M and Zara? They're all putting out the same product.

T: There's this millennial eye-roll at all our culture's sacred cows, and fashion may be one of them.

L: People in Silicon Valley are very successful, they don't give a damn about anything else. And I think you follow a look that you think works for you—people are very afraid to be criticized.