Subway has tried a variety of campaigns from a variety of agencies in the past few years aimed at getting customers to stop thinking about its $5 Footlong sub sandwich. Now it's shaving a penny off that abandoned price point and hyping the price in the hopes of getting people to think about visiting the chain.

The $4.99 Footlong Favorites offer follows the December departure of North American Senior Marketing VP Karlin Linhardt, who left Subway after just eight months amid a report about friction between the sandwich chain and its franchises over the $4.99 approach. The New York Post last month referred to it as a nationwide revolt. The company declined to comment on whether his departure was related to the footlong promotion. 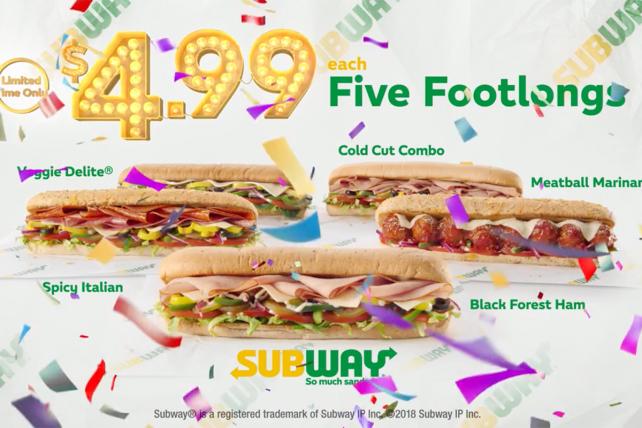 Lower pricing is clearly emphasized in the new campaign, which comes from the Martin Agency. Spots include Subway's version of "The Price is Right" (above) and one playing on the idea that money can't buy happiness (below).

A third highlights the price with a switch in music.

The tagline "Subway, so much sandwich," spoken at the end of the spots was first used in 2017 in another campaign from the Martin Agency for limited-time $6 Footlongs.

Subway introduced $5 Footlongs in 2008 but doesn't appear to have advertised them nationally since early 2014. It started promoting $6 Footlongs in 2016, a head-scratcher since that came soon after saying it wasn't going to focus so much on price.

"Our customers are at the core of our business. They told us what they wanted and we listened," Jack Luttrell, regional director of North America for Subway, said in a statement. "We are thrilled to give our guests their choice of a budget-friendly Footlong or a fit-friendly six-inch sandwich."

Subway could use the boost. While 2017 figures have not been released, Subway's U.S. sales fell 1.7 percent to $11.3 billion in 2016, making it the only restaurant among the top 10 chains to post a decline, according to Technomic.

Of course, it's January and restaurants want to appeal to post-holiday season cost-conscious diners, so Subway isn't the only chain kicking off the year with an emphasis on pricing. IHOP on Tuesday brought back endless stacks of buttermilk pancakes, this time for $3.99. IHOP's offer runs through Feb. 11 and is being promoted with a "Pancakes, Pancakes, Pancakes" campaign from Droga5, which IHOP picked in late 2017 as its new creative agency of record. Taco Bell and McDonald's are among the other chains focused on price-driven campaigns.

Subway's $4.99 campaign comes from the Martin Agency, which has done other project-based work for the chain. In December, Subway picked a customized Dentsu Aegis Network team of agencies to handle its North American media and creative work, beginning in early 2018. That switch came after Subway gave most of its creative business back to former incumbent MMB in 2016, following a relationship with BBDO that lasted about a year.