'We're not perfect,' the brand acknowledges in this week's Marketer's Brief. Plus, news on Amazon's new delivery robot and a potential heart-shaped candy shortage
READ THIS NEXT
Ford ad calls out Chevy, Jeep, Toyota over California emissions

You know we live in polarizing times when the maker of Sweethearts heart-shaped candies goes out of business. Find out more below, including what it means for Valentine's Day. We also have news on the latest expansion by the company formerly known as WeWork. But first, for better or worse, Gillette just can't seem to stay out of the news.

'We're focused on being better'

If one thing has become clear from the enduring controversy over Gillette's "We Believe" ad, it's that even the Procter & Gamble Co. brand has its off days when it comes to treating women with respect. After it set off a firestorm with the campaign seeking to reframe the meaning of masculinity, the brand now finds itself targeted on social media by people pointing to an old sponsorship activation that is hardly progressive. Photos circulating on Twitter show at least 16 women wearing tight-fitting blue jumpsuits with the word "Gillette" stamped across their rear ends.

Gillette: we want men to be better and treat women with respect.

Origins of the photos remain somewhat mysterious, but a Gillette spokeswoman said the photos date back to 2013. A closer look at the photos and a Tineye search suggest they may date back to a Nascar event in Texas in 2011 (Gillette ended its Nascar sponsorship in 2013).

At any rate, Gillette's spokeswoman says: "We're not perfect, but we're focused on being better every day – which is what this whole new campaign is about. These old images reflect that we've not always been consistent with recent commitments we've made at TheBestMenCanBe.com. We take responsibility for this, and more importantly take responsibility for setting a higher standard as we move forward – for ourselves, our consumers and most importantly for the men of future generations."

Another year, another innovation from Amazon. Last year, the ecommerce giant brought its Key in-home delivery service to the backseat of cars. This year, it's making deliveries even more automatic. The company is rolling out—literally—a new delivery system it will initially test in one West Coast neighborhood. Residents in Snohomish County, Washington will soon see Amazon Scout, Amazon's new robot, delivering their packages.

The size of a small cooler, Scout, which will be initially chaperoned by Amazon employees, will wheel along sidewalks during daylight hours. According to a blog post, Scout is programmed to "safely and efficiently navigate around pets, pedestrians and anything else in their path." Amazon released a snappy little video highlighting Scout's sunshine on Wednesday.

No Sweethearts for you

If you're looking for conversation hearts to give out on Valentine's Day, you're out of luck. Sweethearts, the colorful heart-shaped candies with messages on them won't be available in time, as CNBC and others report. Sweethearts-maker New England Confectionery Company, or Necco, went out of business in 2018. And while it found a buyer, the new owner didn't have time to ramp up production ahead of Valentine's Day. There are other brands out there for those who don't mind non-Sweethearts conversation hearts, including Brach's and even Sour Patch Kids. Plenty of Sweethearts are up for sale on Amazon. You may want to check the expiration date.

McDonald's is giving away bacon with any purchase, with a catch made clear in the offer's name: Bacon Hour. The giveaway of two half pieces of bacon per purchase, on Jan. 29, from 4 p.m. to 5 p.m., could help the Golden Arches drive some incremental business in between lunch and dinner. But the real reason behind McDonald's "bacon'ized" (its "word," not ours) plans is to hype three limited-time items: the Big Mac bacon burger, Quarter Pounder bacon burger and cheesy bacon fries. The plan means someone could top ice cream with bacon, try a Filet-o-Fish with bacon flavor, coffee with bacon or go a more traditional route, like adding bacon to a breakfast sandwich.

White Castle just extended one of the most obvious sponsorships in sports. The sliders chain has been an official sponsor of USA Luge since April 2017 and extended the partnership for two more years. White Castle is also the title sponsor of USA Luge's off-season recruitment program, the White Castle USA Luge Slider Search, which includes free clinics to introduce kids to the sport and spot talent for future luge teams. Three of the six people competing in the 2019 Luge World Championships came from past searches, White Castle said.

Brandless, the ecommerce company founded two years ago on the premise that consumers don't need brand names for their basics, is expanding into pet and baby products. Consumers will soon be able to buy chicken breast or duck jerky for their dogs, along with veggie pouches and teething wafers for their tots. While the company says the majority of items are still $3 or less, Brandless is also introducing a $9 price point to cater to more affluent shoppers.

Fresh on the heels of its rebranding to the We Company from WeWork, the co-working office space brand is now debuting Made by We, a retail space the company describes as a "town square." Located at 902 Broadway in New York City, the spot will sell snacks, apparel, travel items and other goods from brands like Sonos and Herschel Supply Co. that use We spaces. Non-members can book office space on a pay-per-minute, walk-in basis.

Intuit QuickBooks is working with Giphy to extend its "Backing You" campaign into a searchable library series of GIFs starring Danny DeVito as a small business coach. The campaign originally debuted late last year with a series of 15-and 30-second commercials instructing businesses on how to use QuickBooks. 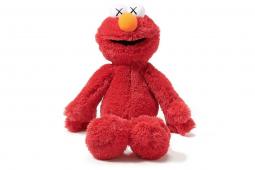 It's been sunny days for the plushies in Uniqlo's collaboration between Sesame Street and pop artist KAWS; the toys are marked down to half price and going fast. While consumers lamented the collection's omission of everyone's favorite grouch (sorry Oscar), a 20-inch Elmo is still buyable for $19.90. "Perfect for both kids and kids at heart," wrote one reviewer. Well isn't that just sweet.

1.38 billion: The estimated number of chicken wings Americans will eat during Super Bowl LIII weekend, according to the National Chicken Council. That's about 27 million more wings than 2018.

A day after the New Orleans Saints lost and fans blamed the refs, Popeyes Louisiana Kitchen weighed in with its joke.