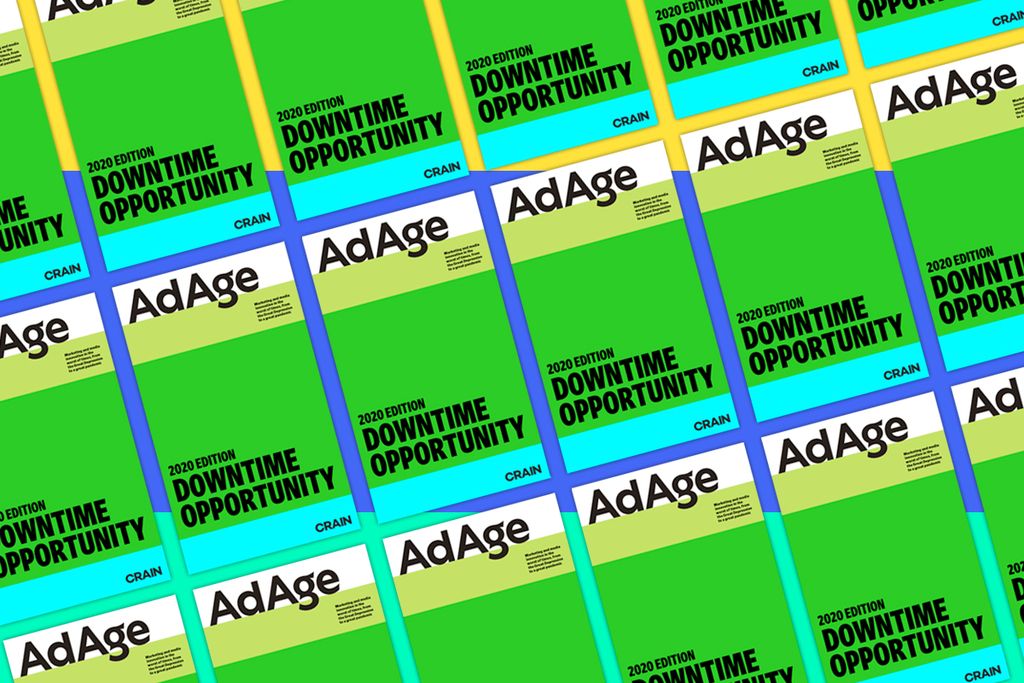 From the Great Depression to the economic tumult of this great pandemic, there is a common thread for marketing: Every downturn brings opportunity and innovation.

In a new 56-page white paper, Ad Age examines innovation in the worst of times, from the 1930s to the present.

What happened to marketers, media and agencies during past downturns? There were layoffs, closings and cutbacks—no surprise. But every deep recession also saw great innovation with new companies, products, services and technology.

“Downtime Opportunity: 2020 Edition” offers an optimistic view of the opportunities that unfold in the toughest times.

The white paper is available for purchase and download at AdAge.com/downtime2020. The report is free for Ad Age Insider members and Ad Age Datacenter subscribers.

Ad Age is no stranger to adversity: The publication launched less than 90 days after the stock market crash of 1929. This new report, an update of a white paper first released in the Great Recession, is based on a deep dive into Ad Age’s archives, supplemented with additional research and government data.

Looking for ideas? Here are 10 learnings from “Downtime Opportunity”:

1. Big innovation in downturns can be obvious—and not so obvious

Radio and refrigerators rocketed to majority household penetration in the Great Depression. Capitalizing on the technology, President Franklin D. Roosevelt exploited the new medium for his “fireside chats,” and General Foods introduced a range of frozen foods.

The significance of many downtime innovations is only apparent in hindsight. Bill Gates and Paul Allen founded Microsoft Corp. in 1975, near the bottom of a deep recession. Tesla produced its first car in 2008; it’s now the world’s most valuable automaker based on stock value. Airbnb launched its website that same year. Uber Technologies was founded in 2009.

Market-changing innovation during the pandemic should come as no surprise. Some change is obvious—the reimagination and transformation of retail, powered by Amazon and Walmart; the rise of streaming, a good escape for so many consumers stuck at home.

Other innovation will become apparent in the rearview mirror—but it’s a sure thing that the next Microsoft or Tesla will take shape in the dark days of 2020. The winners will be those who take a risk, not those who hunker down.

2. Get in on the ground floor

3. Look for the next opportunity

When the Great Recession began in 2007, the primary business for Netflix was mailing movie DVDs to subscribers who picked titles from its website catalog. Netflix kept a watchful eye on rival Blockbuster, which was four times its size.

But Netflix also had its eye on the future. Toward that end, Netflix introduced an “instant-watching feature” to let subscribers view movies on a PC, starting in 2007, and on TVs, starting in 2008. The company’s annual regulatory filing for the year ended December 2008 said: “At some point in the future, we expect that Internet delivery of content to the home will surpass DVD.”

Blockbuster filed for bankruptcy in 2010. By the next year, Netflix was generating more revenue from streaming than from DVDs.

Going into the Great Recession, News Corp.’s MySpace was still the star of social media. News Corp.’s 2007 annual filing boasted: “MySpace.com is the leading social networking site on the Internet, with over 188 million registered users worldwide as of June 30, 2007.”

By the end of the recession, MySpace was shrinking, and Facebook—founded in 2004—had taken the lead. News Corp. unloaded MySpace in 2011. Facebook’s worldwide revenue soared to $777 million in 2009 from $153 million in 2007. Facebook turned its first annual profit during the deep recession year of 2009.

5. Trade up in a down market

The early ’80s were the period of generic beer, 10 percent unemployment, 13 percent inflation and record-low consumer confidence. But even in terrible times, there’s a market for trading up.

Carnation (now part of Nestlé) helped pioneer the category of premium cat foods with Fancy Feast, rolled out between 1980 and 1982.

Absolut vodka, introduced in the U.S. in 1979, began a celebrated campaign in 1981 featuring its iconic bottle. First ad: “Absolut Perfection,” with a halo over the bottle. By 1985, it was the No. 1 imported vodka.

Related Articles
Opinion: What 9/11 can teach us about marketing in the time of coronavirus
Bradley Johnson
History shows marketers who keep spending during downturns fare much better
Jack Neff
How marketers responded to the coronavirus in the first three months
Ad Age Staff
Millennials 'killed' these products, but COVID-19 brought them back
Adrianne Pasquarelli
6. Bank on opportunity when financial markets are in turmoil

FDIC insurance began in 1934, bringing stability and security to banking following a spate of bank failures.

Regulatory and market changes during the Great Recession created opportunities for non-bank financial firms. Rocket Cos. (Rocket Mortgage and Quicken Loans) saw its share of new mortgages soar to 9.2 percent in early 2020 from 1.3 percent in 2009.

7. Challenge every employee to sell the goods

In 1933, one of four workers was unemployed. In such a time, it was entirely appropriate for a company to lean on the staff to help move the goods.

During the Depression, Westinghouse enlisted each of its 35,000 employees to pledge to sell one or more of its appliances through a local dealer—by pressing, for example, friends and acquaintances to buy. Westinghouse employees received prizes for their participation.

“Other companies have requested details of the program,” Ad Age reported, “expressing the belief that if a sufficient number take similar action, beneficial results will be felt throughout the country.”

New cars weren’t selling in 1930, but the industry spotted an expanding revenue opportunity: service. That year the Motor and Equipment Association began an ad campaign with the slogan, “Care will save your car.” Ford launched its own parts-and-service campaign the same year.

Flash forward: In 1975, when the auto industry was struggling to dig out of a deep recession, General Motors Corp. began another drive to sell parts and service. GM’s new pitchman: Mr. Goodwrench, described by Ad Age as “a smiling, balding mechanic (with clean hands).”

9. The weakest or smallest player can drive innovation

What’s to lose? No. 3 Chrysler Corp., stuck with a 136-day supply of cars, forever changed the market on Super Bowl Sunday in January 1975 when it unveiled the newest thing: a car rebate. Rival Detroit automakers followed. The rebate scheme soon was mimicked by appliance marketers, food makers and retailers.

The general manager of GM’s Chevrolet told Ad Age in March 1975: “The rebates did stimulate the market, but when they were concluded, [showroom] traffic diminished. We cannot go back to rebates. And if General Motors can’t afford to, then the competition can’t either. We must go back to more conventional methods.”

Automakers have been addicted to rebates ever since.

10. Go for both the short-term and long-term win

Toyota Corolla trailed only Honda Civic in the government’s first miles-per-gallon report in late 1973. During the energy crisis, Toyota was selling everything it could produce. “If anything, the temptation has been to spend less on advertising because we’ve got such a built-in demand for our vehicles,” a Toyota executive told Ad Age. “We haven’t succumbed to that temptation.”

Toyota stuck to a plan to build its brand and products for the long haul. It surpassed Volkswagen as the No. 1 import in 1976 and never looked back.