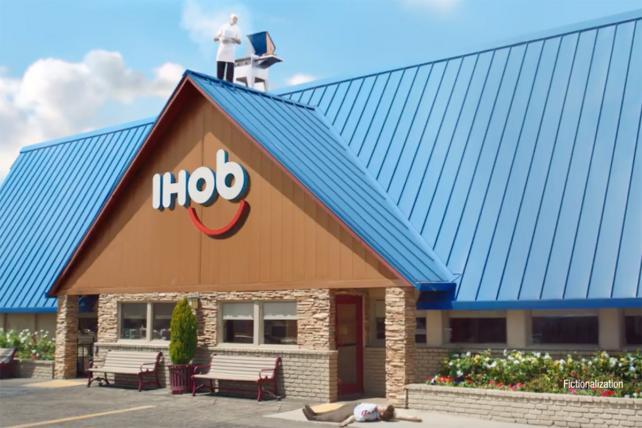 If you've been living under a rock, or managed to avoid Twitter this week, you may not know that IHOP is jokingly calling itself "IHOb" to promote an updated burger line.

As a sign of how far the ploy can go, IHOP President Darren Rebelez is currently listed as "chief burger officer" on LinkedIn.

Oh, and the lapel pin he's sporting on his gray suit this week: it's a burger.

Just a few days in, the buzz around IHOP -- aka IHOb, for a limited time -- seems to be working. Restaurants are seeing roughly four to seven times as many burger orders as they were before the switch, Rebelez tells Ad Age. Most burger orders are coming during the lunch and dinner times. And while IHOP is running a $6.99 introductory offer on the classic burger, it's actually selling more of the other versions with a variety of toppings -- and higher prices.

Broadly, the campaign has played out as IHOP expected "except for the magnitude of it," says Rebelez.

Attention and engagement exceeded IHOP's expectations but the responses are similar to what it had anticipated after planning that included in-market tests and focus groups. At first, many people are curious, then a bit outraged when hearing IHOP's focused on burgers, says the company, until they realize its pancakes aren't going anywhere and that it will always be focused on breakfast.

Sure, there have been some "hate mail" types of reactions since Monday's reveal, says Rebelez, but the brand hasn't wavered. "Our guests told us that they wanted this."

IHOP hasn't changed its outreach drastically, though it did fine-tune some of its wording "to just make sure it was clear that we weren't getting out of the breakfast business," says Rebelez. "There was a little bit of an overreaction to that and so we just wanted to make sure that everyone was clear … we're always going to be committed to our breakfast. We're always going to be called IHOP."

IHOP knew that before it tried to win over customers, it had to convince the franchisees that operate its restaurants that the effort made sense.

"There was a reluctance at first from the franchisees because the brand has made a couple different runs at promoting P.M.-type offers in the past and they've typically fallen flat," says Rebelez. "We knew we were going to have to do something different."

As franchisees heard more about the plan, "they were cautiously optimistic" but also nervous, says Rebelez. Training and an early rollout of the new patties helped the chain prepare. And then IHOP needed to do something to get people talking about the burgers. Hence, the major pre-launch buzz and campaign from Droga5.

When IHOP teased the name change a week before the reveal, more than 70 percent of people guessed the seemingly safe bet of "breakfast," while plenty of others chose words like bacon and brunch, says Rebelez. Less than 10 percent of people guessed the "b" would be for burgers. To grow its business, though, IHOP sees a need to bring more diners in, more often, particularly during lunch and dinner times, when burgers are the go-to item.

"We have so much credibility but then that kind of falls off when you get to lunch and dinner," says Rebelez. "We just want to give more people reasons to come more often."

IHOP wants to prove that it can take burgers as seriously as it takes pancakes. Early reviews have been favorable.

The burger overhaul comes after Rebelez joined IHOP in 2015, followed by Nevielle Panthaky as VP of culinary in 2016, and former CKE CMO Brad Haley as CMO in 2017.

Sure, not every tweet has been positive. But that's ok.

"Probably my least favorite was the Wendy's response, but that's fine," Rebelez says of the line: "Can't wait to try a burger from the place that decided pancakes were too hard."

Can't wait to try a burger from the place that decided pancakes were too hard.

"On the flip side of that, the fact that everybody in the burger business is talking about our burgers and us, I think, was kind of cool."

IHOP was the second-biggest trending global topic on Twitter on Monday, even with the then-pending meeting between U.S. President Donald Trump and North Korea's Kim Jong Un. In the U.S., the chain held the No. 1 spot (IHOP), No. 2 (IHOB) and No. 4 (International House), Rebelez notes. There were 86,000 tweets per hour at the peak on Monday, according to IHOP.

The fun was had. By Wednesday, Burger King had reverted back to being @BurgerKing rather than @PancakeKing, the handle it used earlier in the week. And IHOP was no longer trending.

There have also been about 15,000 media stories, roughly three times as many as IHOP got this year for its biggest day, National Pancake Day. Now, its job is to continue that momentum and translate it into sustainable sales growth.

"I don't know if there's any one single competitor that I'd say I'm really worried about," says Rebelez, while noting IHOP most often gets compared to Denny's. "It's really more the preponderance of new options and opportunities for people to go and experiment that is probably the single biggest threat."