James Harden Is Back on the Court With Trolli Skills Videos 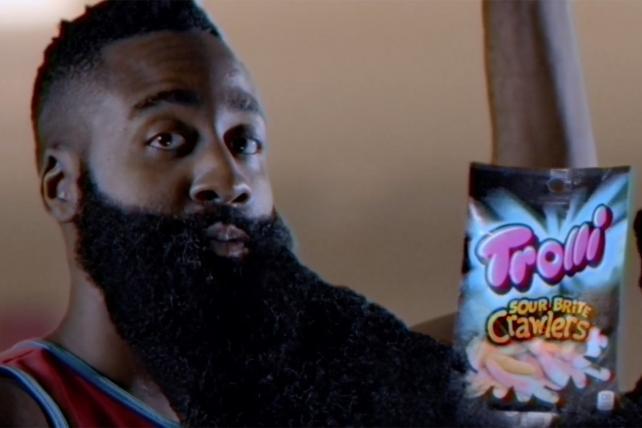 Trolli is tripling its marketing spending and starting to use longer digital videos as it tries to win over new fans of its sour gummy candy with the help of NBA star James Harden.

"We've almost doubled in the last three years," Jill Manchester, senior VP-marketing and brand strategy at Ferrara, said in an interview, citing IRI data that shows Trolli's annual sales jumped 15.5% to $157 million in 2015. She said Ferrara will increase marketing spending on Trolli by about 60% to about $15 million this year.

"We are really focused on increasing our brand awareness. We have very loyal consumers," she said. "It's just getting more people to know about us."

The videos come after Mr. Harden's NBA season ended with the Rockets falling to the Golden State Warriors in the first round of the playoffs in April. When the next NBA season starts in October, Trolli plans to have new creative work out featuring Mr. Harden, as well as more products and promotions, Ms. Manchester said.

Trolli's partnership with Mr. Harden, currently set to run through 2017, includes product development. First up, "Weird Beards" candy shaped like Mr. Harden's face is in about 7,000 7-Eleven stores following an initial release in the Houston area earlier this year. Ferrara is ramping up production so it can expand that item into other retailers this summer. Weird Beards candy is not featured in the new videos.

The brand will also give away items such as the uniform he wears in the videos and a zippered ball used in one of the videos.

Periscope is Trolli's agency of record, with Kelly Scott Madison on media and Legend on public relations.