This week's Marketer's Brief also has news on how refugees can boost a brand's appeal
READ THIS NEXT
GM's ad blitz for new Hummer EV includes World Series, Twitch and NBC's 'The Voice'

New Yorkers might find themselves doing a double take when they encounter a double-decker bus with a Jaguar SUV inside. And a brand which had its ads rejected by the NYC subway got even better publicity in an "SNL Weekend Update" sketch. But first, McDonald's, which stopped serving chicken treated with antibiotics important to human medicine, is now starting to tackle the same issue for its burgers. 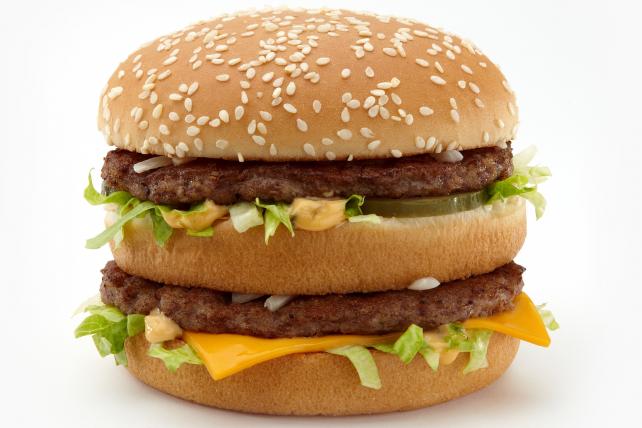 Beefy issues
When McDonald's makes a move, competitors often follow. This week, there's a new animal stewardship aim for rivals to address. McDonald's outlined its goals around reducing the use of antibiotics important to human health across the majority of its global beef supply chain, including a plan to set reduction targets in its top 10 beef sourcing markets by the end of 2020. It also joined the U.S. Centers for Disease Control and Prevention (CDC)'s Antimicrobial Resistance (AMR) Challenge, and appears to be the only restaurant on the list (for now). What about other chains? Wendy's issued a statement a day after McDonald's, touting itself as the first restaurant chain to partner with something called the Progressive Beef program and said it will keep working to quantify and further reduce antibiotic use "where possible."

Entering the refugee conversation
Brands that support refugees might have a better chance of attracting shopper's dollars—particular from millennials' wallets. A new report from the NYU Stern School of Business and the Tent Partnership for Refugees examined purchase behavior for brands that hire refugees, deliver services to refugees or source from refugee businesses, and found that Americans are more likely to buy from such retailers. "In a crowded marketplace, brands that integrate refugees into their business can distinguish themselves from their competitors, especially among millennials," says Gideon Maltz, executive director of Tent. The report cited brands such as Ikea and Mastercard. The findings are a new twist on the brand values trend popularized by campaigns like Nike's successful Colin Kaepernick push.

Free ride alert for last-minute shoppers
Anyone who procrastinated on holiday gifts this year can get a quick ride to an Old Navy, courtesy of a collaboration the Gap-owned retailer is running with car-sharing service Lyft. On Dec. 15 and Dec. 22, shoppers who purchased online and need to pick up in store can get a free roundtrip to an Old Navy store. 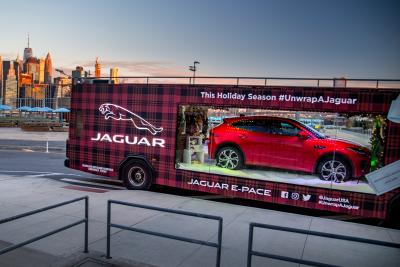 Jaguar put an SUV inside a bus for a promotion

Going mobile
Jaguar is taking a street-level marketing approach for the holidays. The luxury auto brand apparently drove its new 2019 E-Pace compact SUV into a hollowed out double-decker bus decorated like a Christmas-themed retail store window. The display, which started cruising the streets of New York City this week, was designed by HGTV's Jonathan Scott. It is part of the brand's holiday campaign that includes a sweepstakes. To enter, Jaguar wants people to take a picture of the bus and tag it with "#UnwrapaJaguar" on social media, as well as visit this site.

Tushy can't get on the subway but does make "SNL"
Tushy couldn't get its ads featuring folks sitting on the toilet placed on the New York City subway, but it did parlay the publicity into a nearly three-minute segment on "Saturday Night Live" in which Michael Che proclaims his love of bidets. The brand, which makes a $69 attachment that can turn any toilet into a bidet, originally got approval for subway ads from Outfront Media, but MTA Chief Development Officer John Lieber later sent a letter rejecting the ads because the photos made them look like they were pushing a "sexually oriented business." The headline on one ad: "Nothing says I love you like a clean butth*le!" It's the latest in a holiday campaign that also included a video ad featuring Santa and a talking anus. It's also a new spin on the old tactic of creating "Super Bowl ads" likely to be rejected to trigger free media attention.

Crusto-currency
That's the "word" Papa John's cooked up to pitch its updated Papa Rewards program. Participants now get one point for each dollar they spend, rather than a point for every $5 spent. After they spend $75 and earn 75 points, they get $10 in "Papa Dough" which can be redeemed for "pizzas, sides, deserts (sic) and more," the struggling chain said. There's also a hype element for people who consider themselves Papa fans: a chance to win a gold version of the pepperoncini, which it says is worth more than $10,000.

To promote Philadelphia dips there's a Philadelphia Double Diptector. The prototype of a bowl that helps party throwers catch double dippers and sounds an alarm is being sold on eBay, with proceeds going to Feeding America. The Kraft Heinz brand worked with Droga5, Starcom, VMLY&R and others on the project.

Number of the week
13 percent: The number of consumers who "completely trust" retailers to protect their personal data, according to a recent shopper study survey by Zebra Technologies.

the results are in and we lost. still, I for one am proud of all you beeflings that put up the good fight. wendy's is the most notorious, popular brand in twitter history so just being placed in the same league as them was an honor

Comings and goings
Luxury fashion house Loewe appointed Charlie Smith as chief marketing officer. He was formerly group account director at R/GA London, and will now be based in the Paris office of the LVMH-owned Spanish brand.