Most marketers complain about budget shortages. But for Organic Valley's chief marketer Lewis Goldstein, it's not so much budget hampering his efforts as butter. Thanks to an organic butter shortage, his holiday campaign by new agency Big Spaceship, dubbed "It's Butter Season," will have to hold until next season, since there's no point in drumming up demand for a product in tight supply, he said.

While he waits for the shortage to subside at the farming co-op and dairy company, he's spending time honing a national media investment, as well as a more digitally-focused strategy. Oh yeah, and getting better at Euchre, the card game that the farmers on the board like to play after meetings.

Mr. Goldstein, a Northeast native new to farm culture and Euchre when he joined Organic Valley in 2011, spent most of his career at gigs in New York with marketers like Boston Beer Company and Doctor Pepper Snapple Group. So when a recruiter called and asked if he'd be interested in running marketing for Organic Valley in La Farge, Wisc. (pop. 680), he laughed.

But then he did something that most stressed-out New Yorkers wish they had the guts to do. He gave the gig another chance. He was hooked after one visit, which entailed an interview with the company's "C-E-I-E-I-O" (otherwise known as the CEO) and a chat with the retiring head of marketing, who quizzed him while weeding the company garden.

"I had come to a point at which I realized I wanted to use my skills to encourage people to do things that were healthier for them," he said, referring to his time at Dr Pepper Snapple Beverage Group. "I wasn't as comfortable working on products I didn't believe in myself and I didn't really think were contributing to the health of my country."

He had actually left Dr Pepper in 2008, the year it broke off from Cadbury Schweppes Americas Beverages, to lead marketing for Kiss My Face, a small company in upstate New York that makes organic body care products. It was a step in the right direction, but after a few years the company was a little too small and the gig not challenging enough, he said.

Organic Valley, while not offering a salary on par with what he had made in New York, was a $700 million brand and growing, and it also fulfilled a personal belief that "we need a middle class in this country or we'd be in big trouble," he said. The 1,800-farmer co-op consists largely of small-farm farmers with an average herd size of 75 cows, and has a history of taking in organic farmers in need of work.

"We had a great authentic story and I don't think we were telling it as powerfully as we could in aspects we could tell it," he said. "I wanted people to see the reality of what's here behind this co-op through packaging, video and advertising."

Mr. Goldstein would be the first new member of the management team in 13 years.

He was tasked with supporting the existing story, but also taking the brand and its message beyond core health and natural food stores like Whole Foods to more mass retailers like Walmart and Wegmans. He also saw an opportunity to develop a strong innovation pipeline and introduce ready-to-eat and -drink products. 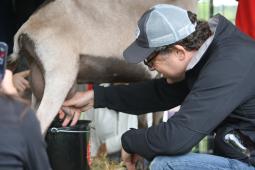 Since he joined, he has watched the company grow from about $700 million in revenue to almost $1 billion, and he's helped expand the product portfolio beyond butter, milk and eggs, among other dairy staples, to include products like meal-replacement and athlete-recovery beverages. He also spearheaded national buys on radio and in print, and saw "a considerable lift from that."

He's not doing it on his own. The chief marketer has brought a handful of big-city marketing minds to the small-town farm, where he's lured a head of innovation from Nestle, a longtime creative from DraftFCB and an executive from a promotional agency in New York City to join his team of more than 60 staffers.

Hiring Big Spaceship, which replaced a more traditional creative shop from Minneapolis, is the latest move. "With this type of brand connection we were seeing, we have via social, video and [platforms like] Pinterest, we needed an expert in digital," he said.

He described the shop's "It's Butter Season" campaign, which celebrates a time when bakers are "shining in the world," as "awesome" despite the bout of bad timing. "We got it out there for week, and some of our biggest retailers were calling us saying, 'You use 12 sticks of butter in that video; I want them.'"

The plan is to connect more consumers with the farms through tours and virtual experiences. For example, the team is thinking about strapping a live camera on a cow, so that a kid having breakfast can scan a QR code on a carton of milk and see what the cow is doing at the same time, he said.

He'd also like to do more partnerships like the company's work with local bike brand Trek. "I've done a lot [of partnerships] in past lives," he said. "I'd like to find other brands with similar customer bases who would benefit from being associated with us. I want to push the team to try to find other companies, whether they're food or retail, to help build the brand."