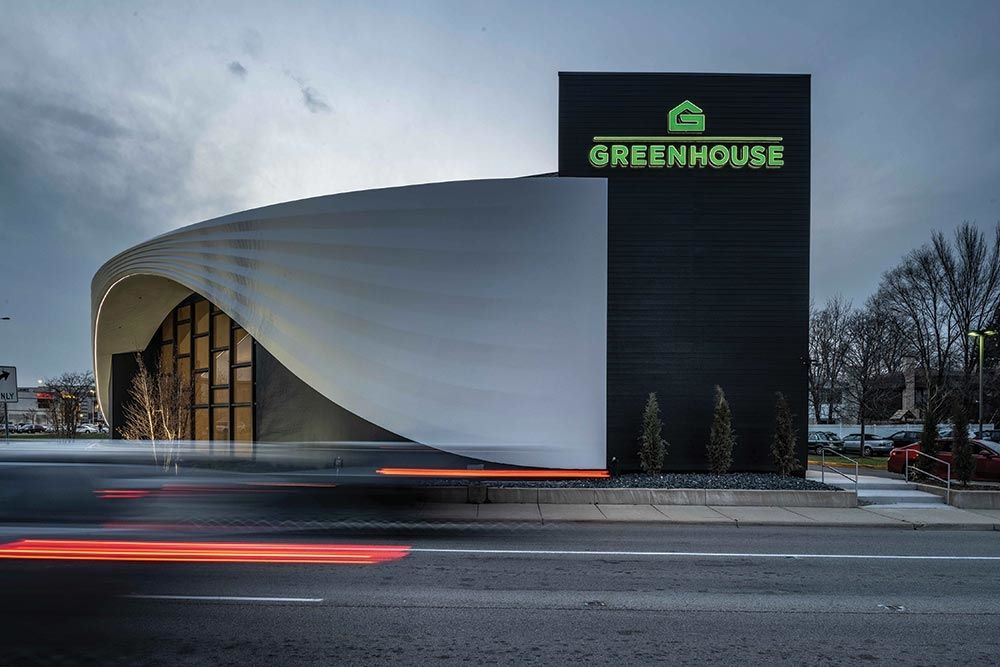 The Greenhouse dispensary in Skokie.

High-concept retailing is coming to weed.

New pot shops that have opened since Illinois legalized recreational marijuana in January look more like Apple stores and less like UPS stores. They've gotten bigger, brighter and more expensive, like the 15,000-square-foot Greenhouse store across from in Old Orchard mall in the Skokie suburb. It's about the size of an Aldi or Trader Joe's grocery store and features a striking roofline outside, a winding staircase inside and a large sales floor dotted with sleek wood display cases topped by glass.

"The trend in cannabis today is you're looking at it like traditional retail: You want a bigger box to serve more people," says Talley Wettlaufer, senior vice president of retail for Curaleaf, which is acquiring Greenhouse and its parent, Grassroots. "The industry has just evolved."

A growing number of larger stores has helped recreational marijuana sales nearly double to $75.3 million per month in Illinois since January, generating $20.2 million in tax revenue for the state in September.

Cresco Labs' new Sunnyside store in Chicago-area Schaumburg next to Woodfield Mall is three to four times the size of its original medical-marijuana dispensaries. The company's revenue rose 60% in the third quarter from the previous three months, helped in part by the new Schaumburg store.

As competition has moved from winning licenses to creating a wow factor for customers, upfront costs are rising in an already capital-intensive business. Two large cannabis companies estimate that the new-generation stores cost about 50% more to build out. That puts pressure not only on existing operators but also new entrants—particularly social-equity applicants—that hope to win 75 retail licenses.

Medical-cannabis stores were about the size of a bank branch or small fast-food restaurant and were tucked away in industrial parks. The new stores often are the size of a Walgreens and located along high-traffic commercial corridors.

Marijuana shops are attracting retail design veterans such as Wettlaufer—who worked for Abercrombie & Fitch, J. Crew and Petco before joining Grassroots about 18 months ago—because it's a new industry.

"It's still deciding what it wants to be," says Jaime Magaliff, owner of Steep Architecture Studio in Evanston, Illinois. Her first cannabis project was five years ago for Dispensary 33 in Chicago's Andersonville neighborhood. She added Viola Brands, which is developing stores in St. Louis and in Michigan.

She's now working on Dispensary 33's new shop at 1152 W. Randolph St. in Chicago's Fulton Market, which is four times bigger than the Andersonville location. It's in a former restaurant and across the street from a competitor on a street that has three new cannabis shops in as many blocks.

"Because there's more competition, the stakes are higher to have a nicer space," Magaliff says.

Jeremy Unruh, senior VP of public and regulatory affairs at PharmaCann, which has four stores to build out, says, "Our original stuff was all just Ikea. Now we all have a better sense of the market. We know what we want to build."

Designing a weed shop comes with plenty of unique challenges because of strict security rules. In Illinois, the marijuana itself is kept in the most secure area of the store until it's sold. That makes it hard to display actual products, particularly smokable marijuana buds. So Magaliff relies on a wall of glass display cases attached to the high-security area.

"It's challenging to walk into a place with all the security measures we have and not have anybody notice," she says.

Weed has become one of the few bright spots in retail because it's still growing. Englewood Construction in Lemont, Illinois has done work for Green Thumb Industries, Verano Holdings, Herbal Care and Windy City Cannabis. About 40% of its business this year will come from the marijuana industry.

Still, marijuana stores face the same trends roiling traditional retail. As a strategy to cut down on crowds in the wake of the coronavirus pandemic, dispensaries encouraged recreational customers to preorder online. That has companies rethinking store sizes and layouts.

"Now we're in a post-COVID environment, where do you want people to linger?" Unruh asks. "I'm thinking about the Starbucks experience and how that's transitioned from a counter and seating to an app and a drive-thru: You're there for 45 seconds and leave.

"That's not to say consumer experience isn't important. I'm not sure it needs to be this cathedral experience," he says.

Andy Poticha, CEO of Cannabis Facility Construction in the Chicago suburb of Northbrook, which has done projects in multiple states, says some are considering drive-thru windows. (Illinois law specifically prohibits them.)

"If they find over time that preorders are going to be the wave of the future, then the design will be very different," he says. "You have to think about a separate place to have preorders filled versus having people shop in the store. You might come in one way, go out the other. I'm not sure the size of stores will change much. You'll need more back of the house than floor space."

John Pletz is a reporter for Crain's Chicago Business