Yeah, this could get messy: Raymour & Flanigan gets in bed with Papa John's | Ad Age
Skip to main content

Yeah, this could get messy: Raymour & Flanigan gets in bed with Papa John's 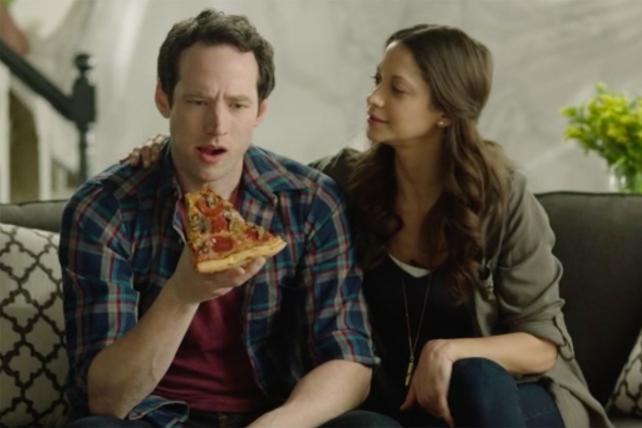 Raymour & Flanigan has cooked up a way to fire back at the rising number of mattresses delivered in boxes: offering free pizza in a box instead.

The furniture and mattress retailer is offering a year of pizza from Papa John's—one large cheese pie per month, toppings extra—to anyone who buys a mattress from one of its 120 stores.

The push includes a commercial, created internally and shot by Mountain View Group, and social media posts, which the retailer handles in-house.

"Mattresses shouldn't come in a box, pizza comes in a box," the man says as he sits on the couch, eating Papa John's pizza straight from the box (of course), as Raymour & Flanigan delivery guys haul in the new mattress and remove the old one. And yes, the couple ends up eating pizza on the brand new mattress.

Raymour & Flanigan sells brands including Beautyrest, King Koil, Sealy, Serta and Tempur-Pedic, and says it employs "sleep consultants" who get extensive training to help customers find the best mattresses. Like other traditional furniture chains, it has been sliced into by the rise of mattress brands such as Casper, Leesa and Tuft & Needle. While mattresses from those companies arrive in boxes, some brands also offer delivery services that include setup and removal of old mattresses.

It's not just smaller players following the mattress-in-a-box trend. Mattress Firm, which has thousands of stores, sells Tulo, its own mattress in a box. And taking a cue from traditional retailers, Casper and Tuft & Needle have some physical stores, while Leesa mattresses are sold at Pottery Barn and West Elm.

For Papa John's, the deal offers additional exposure in seven Northeast states where Raymour & Flanigan has stores. Papa John's, the No. 4 pizza chain, is trying to recover from falling sales. It just announced the departure of CMO Brandon Rhoten, who had the job for about a year. The promotion, which began May 30, is Papa John's first partnership with a mattress retailer.

If anyone springs for the deal, there are plenty of ways to play up the pizza theme in bedding over on Amazon.