For Father's Day, we got you these ads. (It beats a necktie) | Ad Age
Skip to main content

For Father's Day, we got you these ads. (It beats a necktie) 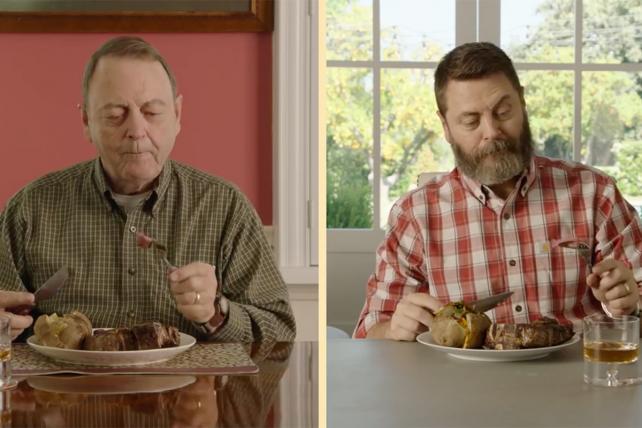 With Father's Day spending predicted to reach a near-record $15.3 billion this year according to the National Retail Federation (NRF), brands are doing their best to take home a slice of the pie.

While unlikely to outdo last year's dad-centric record $15.5 billion in spending, this year the 77 percent of Americans who celebrate Father's Day are expected to focus more on "special outing gifts" than ever before. Roughly $3.2 billion is expected to be spent on concerts, sporting events, or dinner by 47 percent of consumers.

"Consumers are looking into other types of non-traditional gifts to give dads which includes personal care, gifts of experiences, and gift cards," says Ana Serafin Smith, director of media relations at the NRF. "Therefore, brands and retailers are modifying their Father's Day ads to be inclusive of some of these new gift options that Millennials are looking to give during this holiday."

This year's dadvertising follows the holiday trend of heartwarming with a touch of humor. Here are a few that are tolerable. Bonus: not a clueless doofus dad in the batch.

Watch Busch plaster a small town with a dad's Father's Day request: that his sons gift him beer, not brunch.

Cute kids telling bad jokes, what more could you want in an ad? WWE partnered with Ad Council for this sweet Father's Day spot.

Some of our best parenting decisions have been made while drinking Scotch. The partnership between famous "man's man" comedian Nick Offerman and whiskey brand Lagavulin is a natural one. This video, out of a Lagavulin series starring Offerman called "My Tales of Whiskey," celebrates the similarities (and differences) between Offerman and his father.

Dove cares ... about dudes too! The Unilever giant gets (a little) political in this heartwarming ad starring dads talking about why paternity leave is important to them.

No, YOU'RE chopping onions. Michelob surprises fathers and father figures with thank-you letters from the kids whose lives they've impacted in this tearjerker.

Walgreens and P&G team up with Jimmy Kimmel's sidekick Guillermo to produce this one-minute in-show placement.