Self-professed typeface geek Juan Carlos Pagan had already made a name for himself long before he joined DDB, New York as a designer six months ago. The Parsons grad was busy indulging his love for typography at the inaugural [email protected] postgrad class at Cooper Union, when his friend and fellow designer Mike Deal called him to collaborate on a project. Little did they know, they were working on what would become, arguably, the creative industry's logo dujour, for Pinterest.

Pagan says the brief from Pinterest founders Ben Silbermann and Evan Sharp called for a logo with a custom typeface. The original featured Bello Script by Underware, "which is a beautiful typeface, but it's something that anyone license," he explains. "They wanted something that was nostalgic, but not overly nostalgic. It had to work on really small screens because most of the interaction with the logo would be on a mobile device or screens."

The process of creating the logo came naturally, and the pair was free to take creative risks, Pagan says. "Ben and Evan were really great at expressing what they were looking for and they have a high level of respect for craft and design. They see it and feel it and understand the significance of it. That's the only reason we were able to do some of the things we did, like using a discretionary ligature, for instance." For non-typography geeks out there, he's referring to the ornamental connection of the logo's "s" and "t." Says Pagan, "That not only helped the logo feel right, but it adds that bit of craft and quality I think they were looking for." 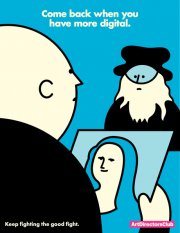 The Problem with P

The biggest challenge? "We had this ongoing joke of getting the right degree of 'P-ness,'" he laughs, bringing out the twelve-year-old boy in all of us. Initially the pair believed that having the P mimic a pin would be a "little too obvious," he says. "The whole entire time, we were like, 'No, no pin. Let's just make a beautiful P and that's it.'" But toward the end of the project, they decided to give it a go. "We didn't want to make it too sharp because that's evil. And we didn't want to make it too soft because then it would be a nub. It was really about nuancing the right degree of suggestion of 'pin,' and we got to a place where we were like okay, maybe it's a little obvious but it's okay because it feels right. If this P is going to have to live by itself, then maybe it should be a little more conceptual in that sense. I'm really happy with that decision because it really helps people interact with the logo."

Beyond Pinterest, Pagan has also worked as a designer at G2 and MTV, where he worked on the identity for MTV Scratch. Now at DDB, he's has applied his smart design and typography sense to the agency's work for the Art Directors Club, the New York Lottery, Hertz, including the latter's a standout poster campaign with a fun, art deco vibe, featuring a variety of slightly tweaked typefaces, courtesy of Pagan.

The posters featured illustrations from Studio AKA designer Chris Gray. "I took Chris' work and started really developing the individual typographical language for each poster. It could have been easy, you could have just had him do it and slap type on top, and that would have been fine. But I really felt that even though it was a campaign, each ad deserved a unique typographical voice. The typography relates to the art." 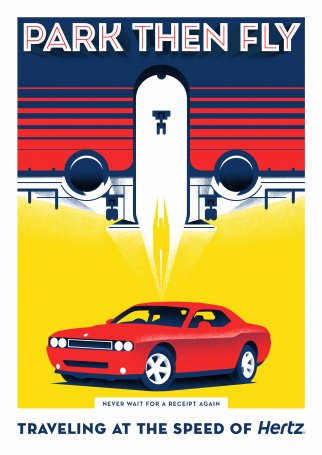 At Creativity, we've noticed that the work out of the agency has gotten a lot more interesting over the last several months. CCO Matt Eastwood and ECD Menno Kluin say Pagan is one of the factors behind the shop's creative renewal. An unusual creative process also helps. "Menno and I have weekly, if not daily conversations about the things we want to create, the people we want to work with and how that fits into our clients' needs," says Pagan. "And out of those conversations we approach creating stuff and proposing things to our clients. If they like them and if they're on par with strategy, we'll move forward with it. It's unique. We're a global agency, but here in New York, we act really nimbly. We act like a small design studio and I love that. We approach projects with this idea that we can make them.

When asked about his thoughts the state of design in advertising, "I don't think it's as bad as a lot of people think," he says. "The truth is I think a lot of things lie within mediocre. It's like a microcosm for society and people--10% are exceptional, there's 80% in the middle, and then 10% that's horrible. Design, in terms of advertising, a lot of it you're seeing is in that 80%. You're seeing it, but you're not really seeing it. You're not really engaged. I think we're striving here to do the top 10%."

Which, he believes, can not be reached on talent alone. "It's tough to excel to the top," he says. That's hard work. There are a lot of talented people in the industry, but I think the people who get to that 10% are people who have an extremely high aptitude for hard work."

When he's not killing himself over ads, Pagan tends to another outlet for his letter-driven obsessions, his own foundry Pagan & Sharp, launched with fellow designer Lucas Sharp.

If not doing advertising:

On what his family thinks of his career:

I had an interesting experience explaining to my grandparents what I do, but they don't quite get it. They get that I work in advertising, but they think typography just exists, that it's like air, which most people should, and it's fine.

On his favorite typeface:

I go through momentary fits of things I'm really drawn to. Right now, I'm really interested in Fleischmann and William Addison Dwiggins and his M Formula, which kind of informed my latest typeface. It involves really sharp points on the inside, the counterforms, and these really round smooth points on the outside, and the tension and contrast they create and how they read when they get really small. That's really fascinating to me.

I like books-- a lot. I romanticize reading a book. I love holding the book, smelling it. I love being on the train on a cold Winter's day with a cup of coffee and a book. I can just ride the train back and forth. There's something soothing about that.

My roommate has an iPad and he reads on it and it seems wonderful. I'm not hardened. I have an iPhone, I read and write emails on it, but I do enjoy the book, the page flipping, making creases. My room is books, it's like my bed, my computer and books.

Check out the full list of Creativity's 2012 Creatives You Should Know.