The 2020 Creativity Issue spotlights the work, people, productions and business ideas that broke through—plus a look at what would have won at Cannes, and five questions with Verizon CMO Diego Scotti
READ THIS NEXT
See Levi’s new 501 jeans ads from directors Melina Matsoukas and Martin de Thurah 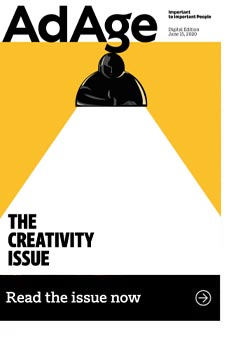 Welcome to Ad Age’s annual Creativity Issue. Typically, this is a celebratory time for the industry, when we’re heady with anticipation for the Cannes Lions International Festival of Creativity. But (old news) the pandemic put everything on hold, including Ad Age’s annual gala in which we celebrate our Creativity Awards, which honor the breakthrough work, talents and businesses carving out the new path for advertising and marketing.

We decided to present the winners now, in June, thinking that after three-plus exhausting, hair-pulling months of trying to figure out the world anew, the industry might need something to cheer about. And cheer them we should. Our winners are a testament not just to how creativity can move brands’ business—but also how we should conduct ourselves to be better humans.

Just as it seemed the world was beginning to creep out of total lockdown, we now confront a deadly virus that has been with us for much longer. Last week, a coalition of more than 600 black advertising professionals issued a call to action to the industry to finally end systemic racism. With all the previous efforts, promises, and pledges that have been made, it’s glaringly obvious the industry has fallen short.

Arguably the most talked-about piece of work in 2018 was Nike’s “Dream Crazy” campaign and that famous Colin Kaepernick tweet. It’s startling to see that now, two years later, the National Football League (along with other brands) has finally changed its stance on players protesting racism in our country. In some cases, powerful and brave brand ideas can point the way forward, but as we see now, it’s taking way too long for the world to catch up.

It’s clear from our own Creativity Awards finalists and winners just how far the industry also has to go. The overall entries this year—and therefore, the winners—do not reflect even close the breadth of diversity we would like to see. As an industry, and as a publication, we must—and we are—committing to do better.

That’s one topic we will explore this coming week during the “Future of Creativity,” our four-day-long virtual event that will celebrate our Creativity Awards winners and also gather the industry’s top and rising leaders to discuss how the business needs to evolve. Those include the leaders of our Agency of the Decade Droga5, Agency of the Year Wieden+Kennedy, and International Agency of the year adam&eve/DDB,  the founders of Saturday Morning, Twitter, directors including Kim Gehrig, Calmatic and Henry-Alex Rubin, as well as young talents who are reshaping the advertising landscape.

That brings me to our cover. Each year for the Creativity Issue, Ad Age holds a contest in which we invite young creatives to conceive our opening image. Our brief asked contestants to show how creativity has fueled the industry during the pandemic. Our winning idea, from Alexandra Lopez of MullenLowe and Miguel Bades of J. Romero in the Philippines, is a simple yet striking scene that shows a sole creative toiling away at a desk, serving as a bright, expansive light in the process. It not only speaks to how creativity has propelled the industry at a breakneck pace through the coronavirus crisis, but also to how it may help us eradicate the ongoing inequities that plague our industry and beyond.

ESPN’s ‘This is SportsCenter.’ The joys and perils of rebooting a classic