ESPN’s ‘This is SportsCenter.’ The joys and perils of rebooting a classic | Ad Age
Skip to main content
Sign In Register

ESPN’s ‘This is SportsCenter.’ The joys and perils of rebooting a classic

Over the past 30 years, few ad campaigns have been as universally beloved as ESPN’s “This is SportsCenter.”

Dreamed up by Wieden+Kennedy in 1995 and originally inspired by (and even named after) the rock mockumentary “This Is Spinal Tap,” the campaign comically imagined the network’s Bristol, Connecticut, offices as the center of the sports universe—not metaphorically but literally, with athletes and mascots living and working together with anchors and journalists.

W+K made more than 400 spots before splitting with ESPN in 2017. The network then continued the campaign in-house, with mixed results, before pausing it in 2019.

But now it’s back, with a new agency at the helm: Arts & Letters Creative Co., the Richmond, Virginia, creative shop that’s been doing a lot of ESPN work lately, including the brand campaign “There’s No Place Like Sports”—and which counts a number of W+K alums among its staff, including several who worked on “This is SportsCenter” back in the day.

Chief among them is Charles Hodges, founder and executive creative director, who began his career as a W+K New York copywriter. Hodges worked on many “TISC” ads in his three years there. In fact, the well-known 2009 spot with the Oregon duck was the first commercial shoot he ever went on, and he also wrote the classic John Clayton commercial that went viral in 2012.

Now, Charles and his team face a taller order—ushering in a new era of “TISC” ads. Which is a great opportunity, of course, particularly for a young agency, but one that comes with a sky-high creative bar.

“You certainly feel the pressure. There’s a lot of eyes on this thing,” Hodges told Ad Age. “It reminded me of when I started working on the campaign at Wieden. There’s so many great ideas that have already been done.”

At the same time, Hodges believes the campaign—with its instantly recognizable if somewhat undefinable creative DNA—can stay true to its original approach while also finding fresh ways to enchant a new generation, for whom 1995 might as well be 1955.

“I don’t think ESPN ever thought the campaign went away so much as it just quieted down for various reasons,” he said. “Strategically, it’s something that continues to build that relationship with the sports fan. So, when it came to figuring out the next evolution, it was about holding on to the things that have always made it work—and not getting caught up trying to reinvent something that’s always been great.”

An emotional cornerstone of the brand

“Orange Slices” is classic SportsCenter, featuring an awkward moment between athletes and a mascot, who sometimes have no otherwise discernible connection. With its focus on a mascot’s inner life, and no dialogue, the 15-second spot recalls classic executions like the aforementioned Oregon Duck spot from 2009.

Hodges agreed “Orange Slices” feels familiar, but says it’s a fresh glimpse at a recognizable world. “A lot of ‘This is SportsCenter’ is the art of getting out of the way. It’s not about ‘See what we did there?’” he said. “Not everything has to be quiet, but I do think part of the comedy and the production approach is it should feel like an observed piece of absurdity.”

Even though “TISC” went on hiatus for a few years, ESPN never doubted the value of the equity it held for the brand.

“‘This is SportsCenter’ is iconic, and a campaign that everyone knows and loves,” Laura Gentile, executive VP of commercial marketing at Disney Networks and ESPN, said recently when the first new spot aired. “‘This is SportsCenter’ featured timeless creative dating back to the mid-1990s, and it’s our job to uphold this standard and build upon it in new ways.”

Hodges said the idea of bringing “TISC” back emerged naturally after the client and agency built trust over several years—following Arts & Letters’ brand work, and well-received campaigns for its NFL, NBA and college football coverage.

“It wasn’t like, ‘It’s gone away forever. Are we going to do it anymore?’” Hodges said of the SportsCenter campaign. “It was more like, this is a good thing—and it seems like you all have enough people who get us now. There was no grand reveal or crazy process. We built a foundation of partnership and trust. And it was just serendipitous that a handful of us—including a lot of people who hadn’t worked at Wieden—were right for the assignment.”

Gentile has said “TISC” is really about fostering brand love—that the emotional connection it creates translates to loyalty in a crowded sports market, not just for SportsCenter itself but for the whole ESPN ecosystem.

Creatively, one challenge is getting newcomers up to speed with the tone of the campaign and the world-building it entails. Having “TISC” veterans on staff is key, but it is something that can be learned over time.

“You build up that group mind, internalize those rhythms and find something that might be novel in execution but still feels of the SportsCenter world,” Hodges said. “There’s a long-running show-like quality to it. It’s a world that has a law of physics, but you can push it forward and try different things. From the outside looking in, it looks like there’s a formula: ‘Mascots doing stuff.’ But it’s not. It’s a world that’s always being defined.”

A second spot with the USWNT’s stars broke in January. They're in a conference room this time, suffering through a boring meeting about office supplies. As the clock strikes noon, when the meeting is supposed to end, they excitedly get up to leave—only to be unexpectedly and comically delayed.

“The talent strategy is always is always evolving,” Hodges said about featuring the USWNT players. “It’s often about who ESPN is talking to and who might be right for a moment in sports or culture. It was awesome that they were excited about being involved.”

As is true of many campaigns, Hodges said volume is key in the creative process—writing tons of scripts, narrowing down, shooting more than you might need, being open to happy accidents.

“You have the script and the baseline conceit,” he said. “Then I think it’s about being open. Sometimes athletes and talent will have a different idea that can be great. It’s about knowing that the moment will have other surprises in there, too.”

It’s not just an agency endeavor. The client and the production partners are also campaign stewards, keen to uphold its legacy through institutional knowledge. This includes the marketing managers at ESPN, and also the directors. Jim Jenkins of O Positive shot the new spots—he worked on the campaign years ago, along with fellow O Positive Director David Shane.

“That’s how you get lightning in a bottle, like hanging on the Syracuse Orange a bit longer, knowing and internalizing those beats,” said Hodges. “The clients, too, are experts on the campaign. They know what’s been done more than anyone. It definitely feels like one big writer’s room on all sides.”

The launch work also included a third spot, “Performance Evaluation,” featuring SportsCenter anchors Elle Duncan and Kevin Negandhi meeting with “The Fighting Okra” from Delta State University. As it turns out, the anchors have a bit of an issue with the mascot’s attitude.

As they begin a new chapter of “TISC,” Hodges and the team are well aware of the debt they owe to Wieden+Kennedy—for starting the campaign and shepherding it for so long, and for nurturing many of their careers. (Other W+K vets among the Arts & Letters leadership include Danielle Flagg, Hodges’ fellow ECD; Andy Grayson, strategy director; and Temma Shoaf, director of production.)

“A lot of our brains were kind of built there. And the foundation of Arts & Letters, and that independent spirit, comes directly from that place,” Hodges said. “We got so many nice notes from the world of Wieden+Kennedy when it was announced that we were working on the campaign.”

Now, it’s about living up to that legacy—while forging a new one, too.

“We’re very lucky and fortunate to have this chance,” said Hodges. “It feels like an honor. The pressure comes from trying not to take that invitation for granted.” 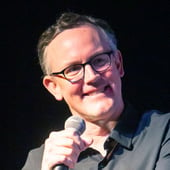