The lovable Apple TV+ coach was actually born from an ad campaign. One of the original creators, agency vet Guy Barnett, looks back on how he came to be
READ THIS NEXT
‘Not Funny!’ The industry remembers Cliff Freeman
Credit: Guy Barnett

Big ad ideas can travel far. Last night, the Apple TV+ comedy “Ted Lasso” came away as a big winner at the Emmy Awards. The show, about a U.S. football coach who is unwittingly pulled into the role of steering a British soccer club, earned the award for best comedy series, along with three other comedy nods for best actor (Jason Sudeikis), supporting actress (Hannah Waddingham) and supporting actor (Brett Goldstein).

What many may not know is that the Lasso character originated in an advertising campaign, a series of promos conceived in 2013 out of agency The Brooklyn Brothers to showcase NBC’s coverage of the Premier League—it was the first U.S. network to bring the League’s entire season to American viewers. The Brooklyn Brothers Co-founder Guy Barnett, now chief creative officer of social impact agency Public Inc., looks back on creating the campaign alongside the series’ creators Sudeikis, Joe Kelly, Brendan Hunt and others.

It was Julie Mulholland, our long-time talent wrangler, who suggested Jason Sudeikis might be up for something. This was after we drew blanks with John Oliver, Seth Meyers, Ricky Gervais and a host of other celebrity football (soccer) fans.

I sat at my desk and scrolled through Jason’s "Saturday Night Live" archives on the YouTube. There was one character I liked—a southern football coach who was apologizing for his coaching teams’ pedophile inclinations—made around the time of the Jerry Sandusky revelations.

Wouldn’t it be funny, I thought, if this American coach was put in charge of an English football team? Not as a pedophile, obviously, but as a fish-out-of-water character. Through his ignorance we could shine a light on the sport our client NBC had just paid $250 million to air. And thus, the idea for Ted Lasso was born.

I wrote a quick script—with some of the jokes making it into the final ads—and presented it to the client. There’s a whole article between there and production as anyone who works in advertising will know. But let’s skip that because it’s boring.

Most of the jokes for the ads were written at writers' sessions with Joe Kelly, Brendan Hunt (Coach Beard) and Jason, most of which I attended. Let’s be clear, though: those guys are fucking funny people. Better comedy writers than me, for sure. But I feel I upped my game enough to earn the credit I take as co-writer.

But then there are a lot of people who deserve a credit for making the ads. Martin Granger, who directed them, and his team at Moxie Pictures. Tina Lam who produced. Joe Dellingham who edited. Melissa Macarian who designed the titles. Patrick Oliver who did the music. And perhaps, most instrumental of all, Bill Bergofin, our NBC client who wrangled Tottenham and the Premier League and used his budget to pay for it. 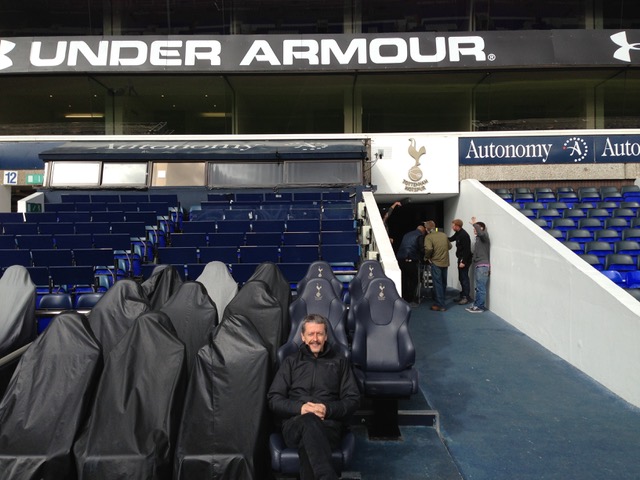 Barnett at White Hart Lane, the former hone of the Tottenham Hotspur Football Club, where the original campaign was shot.

That first ad—some 4:33 in length—got over 10 million views in a matter of days. We knew it was good. Did we think it might make an award-winning series? Actually, yes. It was clear to everyone that there was more to this character and idea. When we came back the second year, we proved it. And got a Silver Lion to boot.

But turning an ad into a series takes the kind of belief that only Ted has.

I know Jason, Joe and Brendan—and their manager Geoff Cheddy—tried to sell this show to different networks for seven years, which is a Hollywood level of patience and perseverance I don’t possess. They, along with producer Bill Lawrence, also crafted a show with a set of characters that have gone way beyond the original ads, with storylines and actors who have clearly engaged millions and millions.

The themes that have struck such a chord with so many are also not part of the original work.

Would it have been nice to be credited somewhere for the founding idea—beyond Barnett being used as a footballer’s name in episode six, season two? No doubt. But then again: shrug. My life is successful enough without having to begrudge the success of others.

Besides, we give up our IP every day in advertising—that’s the deal we make with clients. It’s not even a bad deal. If I was given a dollar for every ad that turned into a hit TV series, I’d have one dollar.

So do I deserve an Emmy? No. Not a whole one at least. Maybe a toe. Oh, and $2 million from Tim Cook would be nice.

Guy Barnett
View all articles by this author