Is the Mexican National Team one of the best-kept secrets in sports sponsorships? You bet!

The Mexican National Team has long had a fan base in the U.S. But since the team's dynamic performance in the 2018 World Cup, when it upset the defending champions en route to the round of 16, the Mexican men’s soccer team has become arguably the top multicultural sports property in the U.S. In that breakthrough World Cup performance, Mexico’s was the most-watched national team by American audiences, with an average viewership of 8.9 million per match for its English and Spanish-language broadcasts.

“We have an opportunity to connect and engage with our fans in the United States by enhancing our commercial offerings and providing an avenue for our partners to connect with this key demographic that is shaping the face of the new America,” said Yon de Luisa, president of the Mexican Football Federation, which oversees the national team. 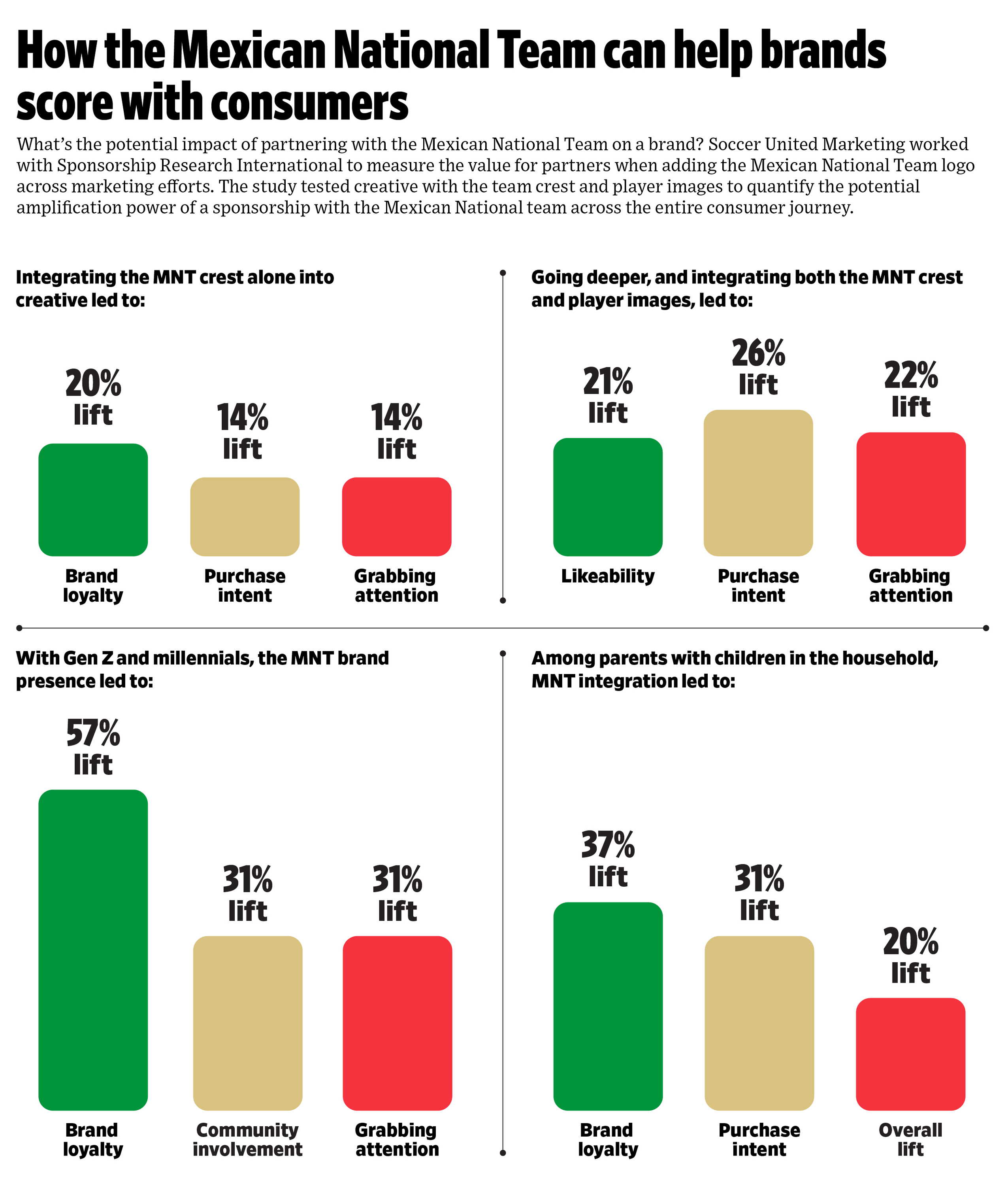 With a fan base now estimated at 60 million, the U.S. has become the Mexican National Team’s home away from home. The team’s annual MexTour features an average of five matches against top international competitors in key Hispanic market areas in the U.S., with an average attendance of 64,000. And since 2015, the Mexican National Team has consistently been the top-selling national team jersey in the U.S., according to Adidas.

“The team is being embraced by brands, and with good reason,” said Doug Hall, senior VP for the sports and entertainment consulting division of MKTG as well as its market research division, Sponsorship Research International. “Our research shows how powerful the Mexican National Team brand is in driving sponsor awareness, loyalty and passion.”

Not surprisingly, the Mexican National Team connects to U.S. Hispanics. According to new research from Sponsorship Research International, about a quarter of the Mexican team’s U.S. fan base are core fans who rarely miss a match, and that core group skews heavily Mexican and male. Core fans are deeply involved with the team, watching matches and clips online, absorbing online content, following the team and players on social platforms and reinforcing the connection through gaming.

But the fan base is so much more than that: 60% are non-Mexican Americans. Overall, team fans are young (60% are millennial or Gen Z); diverse; inclusive (one-third are women); bilingual; and digital natives.

One of the most distinctive qualities of the Mexican team’s U.S. fan base is that it is multigenerational. Among core fans, for instance, 81% say they watch matches with their immediate family. Nearly two-thirds of fans believe sports is an important part of their family relationships, and 70% of the fan base are second or third-generation Hispanics.

Hugo Pimienta, VP of brand alliances at Soccer United Marketing, said that for many fans, watching the Mexican National Team is not just like watching another sports team.

Hall said fan passion for the team extends to partner brands. Sponsorship Research International recently tested creative with and without the Mexican National Team crest, and was energized by the power of the brand loyalty metrics.

Hall pointed out that in tests, merely adding the Mexican team crest to creative generates double-digit increases in brand perception, purchase intent and brand loyalty among the team’s fans. For instance, simply integrating the crest created a 20% lift in brand loyalty.

“It’s a really loyal audience in general, with a lot of passion behind the fan base,” he said. “This is one of those properties that sparks a lot of conversation, engagement and passion.”

“The recently announced extension of our now 20 year-plus strategic partnership with Soccer United Marketing will take us beyond the 2026 World Cup, furthering our positioning in what might be the most important commercial cycle in the history of the Mexican National Team,” Luisa said.

With the 2022 FIFA World Cup ahead, and then matches in preparation for the 2026 World Cup—the latter to be held in North America for the first time in 30 years—the Mexican National Team will be in the spotlight not only in the U.S. and Mexico, but globally.

“The Mexican National Team is a property that is ripe for a much deeper level of sponsorship. It answers so many challenges that brands are facing with their sports marketing efforts—in reaching Hispanics, millennials, Gen Z, women and families, in a relatively uncluttered environment,” Hall said. “It’s an incredible opportunity to tap into one of the most passionate fan bases that’s available.”

Headquartered in New York, Major League Soccer is the league for the new North America. MLS features 28 clubs throughout the United States and Canada, in addition to an expansion team in St. Louis beginning play in 2023. For more information about MLS, visit www.MLSsoccer.com.