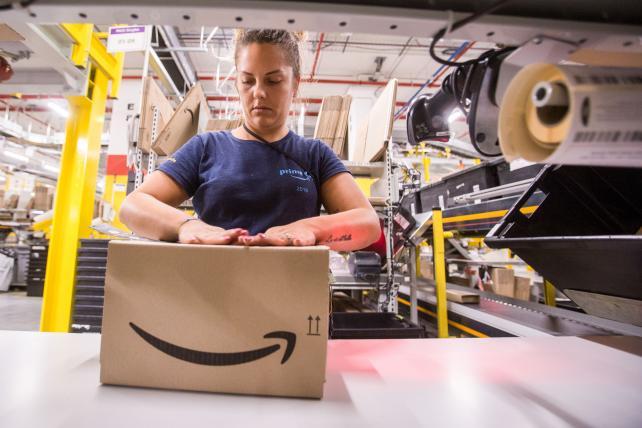 Amazon's ad business continued its breakneck growth last quarter, hitting $2.5 billion in sales, showing once again why the company is earning its place as the No. 3 digital advertising player behind Facebook and Google.

On Thursday Amazon released third-quarter earnings, and while investors were concerned about its forecast for this holiday quarter, advertising remained a bright spot. Ads are Amazon's fastest-growing segment, climbing 123 percent year over year.

Overall, the e-commerce giant posted sales revenue of $56.6 billion in the third quarter, a 29 percent increase year over year. Amazon also hit record profits of $2.9 billion. Its forecast of $72.5 billion in sales in the fourth quarter, however, was lower than Wall Street analysts hoped.

Advertising was on the minds of many of the analysts who joined a call with the company following the results. They asked how much more ad inventory Amazon could expect to free up, and how it will continue to develop its ad technology to service brands and sellers on the platform.

"We still believe that there is a lot of room to continue to improve the presentation," said Brian Olsavsky, Amazon's chief financial officer, adding the company would analyze the amount of ads and type of ads shoppers would find useful.

Amazon has been experimenting with new formats, like video ads that appear in product listings. The company also reorganized its entire ad operation, consolidating the platform under one name, Amazon Advertising.

The push into advertising is even thought to be eating into Google's dominance in search advertising. Google announced lower than expected results on Thursday, in part because Wall Street expects Amazon to take some of its market position.

Advertisers are buying into Amazon as a place to reach shoppers when they are conducting their product searches.

Amazon also is working more closely with Madison Avenue to improve its advertising technology and data services, which could help prove to brands that ads are most effective on its platform.

The company, moreover, is investing more in media, licensing content, and the means to build up Amazon Prime and Fire TV. One Wall Street analyst asked about Amazon's planned IMDB video service, which could run ads, which a number of Amazon advertisers say is in the works. Dave Fildes, Amazon's director of investor relations, did not address the IMDB service, but said that Prime would not show ads. Prime is the $120 yearly subscription service that offers free digital streaming programs and free shipping.

"We have no plans to build an ad-supported Prime Video offering for free at this time," Fildes said.

There is only one place Prime shows any ads right now, and that's with Thursday Night Football games, which Amazon license from the National Football League and streams live. The games also stream on Amazon's streaming site Twitch.