Marketing materials obtained by Ad Age outline its plans to take on Spotify and Pandora
READ THIS NEXT
Mastercard NFT lead mints his resignation letter as an NFT
Credit: Ad Age

In a pitch deck obtained by Ad Age, Amazon is offering advertisers an exclusive opportunity to try “audio ads” that it guarantees will reach a million listeners. 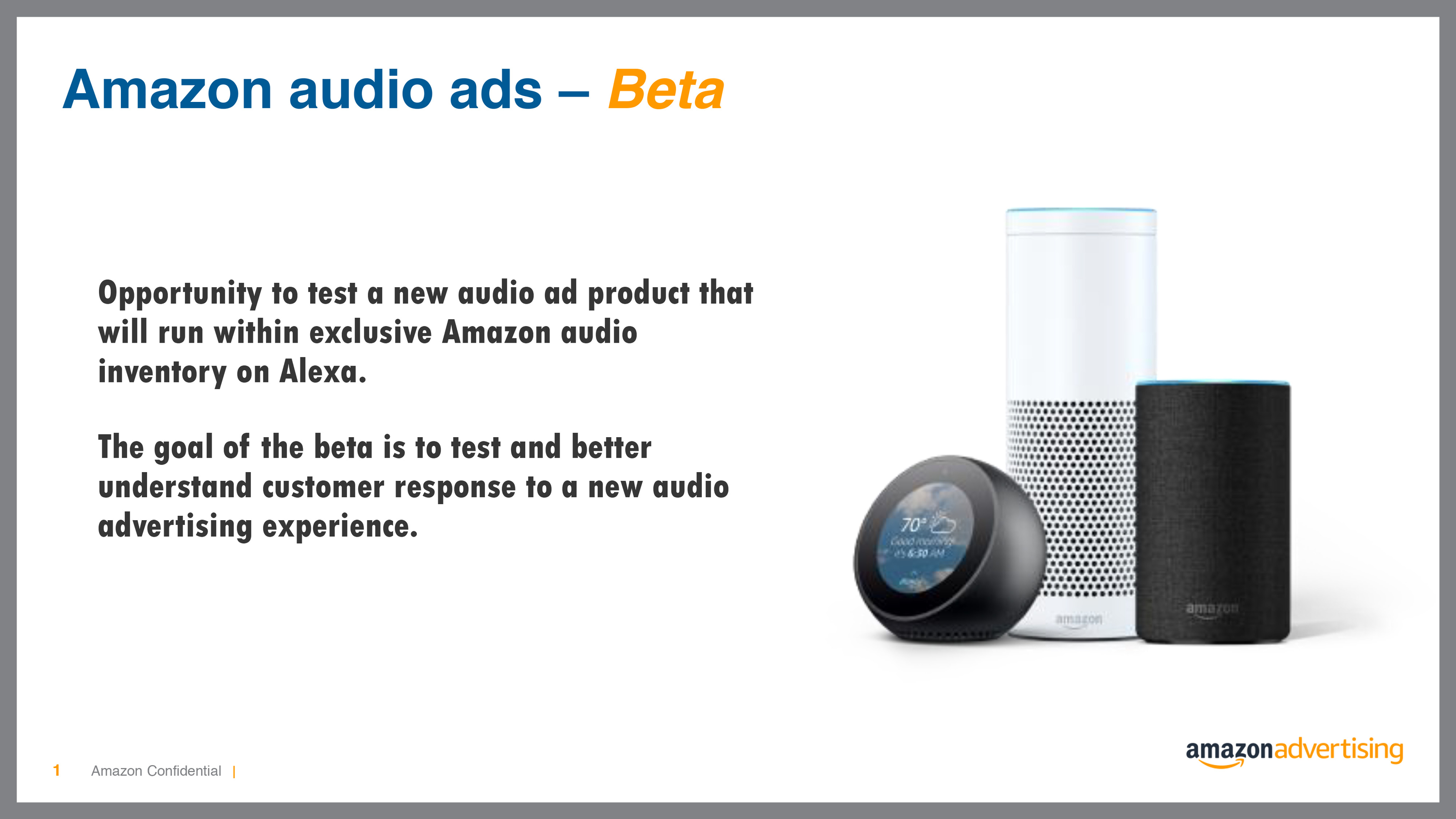 In April, Amazon announced plans for an ad-supported music service to compete against Spotify and Pandora. The pitch deck reveals new details about the program.

The test run is free for marketers,  and Amazon has invited Colgate, L’Oréal and Lululemon, among others, according to one advertising agency executive who spoke on condition of anonymity.

With the music program, Amazon is looking to protect its turf on Alexa-powered Echo devices, voice-assisted home speakers and screens. Spotify and Pandora often use their presence on Amazon devices as a selling point to win business from brands, according to advertisers familiar with sales pitches from all the companies.

Amazon has sold more than 100 million Alexa-voice devices, according to the company, but until the ad-supported music service there was no way for a brand to buy its way onto the platform. (Brands can build “skills” that serve consumers who ask Alexa questions, but can’t buy ads.)

“Audio ads are a really strong opportunity for reaching a niche audience,” says Emily Anthony, director of media services at Merkle, a marketing and data-technology firm. “Amazon has the devices in-home to support it.”

Digital-audio ad sales topped $2.3 billion in the U.S. in 2018, according to the Interactive Advertising Bureau. Spotify reported 123 million ad-supported listeners and $140 million in ad sales in the first quarter of this year.

Amazon’s audio ads are interactive in a way Spotify and Pandora are not, according to advertisers briefed on the program. Listeners can speak to the ads and tell Alexa to add products to shopping carts and other functions. Amazon also is the default music option on Alexa devices when people ask for any random song or genre.

However, in the first iteration of audio ads, brands can only reach a limited segment of Alexa listeners. The program doesn’t include people who pay $8 a month for ad-free subscriptions to Amazon Music Unlimited or Amazon Prime members, who get a limited but deep selection of music included in the $120-a-year service. That leaves only non-Prime Alexa users.

In the pitch deck, Amazon guaranteed a million listeners would hear the test ad campaigns—one million impressions—but in a sign of how nascent the program is, there were no targeting options, according to the deck.

Brands can’t choose the songs their ads accompany, the deck says, nor can they target a specific segment of shoppers. A second ad agency executive, who spoke on condition of anonymity, says that the first run of the audio ads program revealed other flaws.

Amazon gave brands only about two weeks to come up with the creative elements for their ads, including  15- or 30-second audio and an image to run on Alexa devices with screens.

Amazon, the exec said, was not prepared to share key data around how the ads performed, including whether they prompted action. So participating brands couldn’t tell if a listener had heard an ad for, say, paper towels, and then visited Amazon to search for that particular product.

There is also no guarantee that a brand participating in audio ads will be the first search result for a listener who had subsequently visited Amazon.com. In fact, the ad could prompt a listener to search for an entire category, leading the listener to purchase a rival’s product. It’s those kinds of concerns that Amazon will have to overcome, says the ad agency exec, who was granted early access to the program.

“The test wasn’t hugely successful,” the agency executive says. “Amazon hasn’t quite figured out how to insert the ads in a way that makes sense and they haven’t thought out the usability for brands.”

Amazon declined to comment for this story. Advertisers say the audio ads will be widely available in the first quarter of next year, but brands will be testing them until then, especially for the holidays.