Q&A: What Brands Should Know About Facebook Messenger Chat Bots

Tech Firm Imperson Created a Miss Piggy Messenger Bot for Disney
READ THIS NEXT
Why data will change health care as we know it
Facebook's Messenger is making it easier for developers to create chat bots.
Credit: Courtesy Facebook

The bots are coming. Actually, they're already here. Brands like Disney have worked with tech firms like Disney-backed Imperson to create chat bots on Facebook's Messenger service so people can have conversations with computerized versions of characters like ABC's "The Muppets" star Miss Piggy without needing to staff an actual human on the other side of the conversation.

With the news last week that Facebook is opening up new tools to developers that will make it easier to create these chat bots, Ad Age spoke with Imperson Chief Technology Officer Eyal Pfeifel about how these bots work and why brands might use them for marketing campaigns or customer service. And for an idea of how well -- or not -- these chat bots can converse, check out a short interview Ad Age tried to conduct with the Miss Piggy bot at the end of this interview.

A Facebook spokeswoman declined to comment on how Messenger is opening up new tools to develop chat bots and how Imperson has used those tools.

This transcript has been lightly edited for length and clarity.

Eyal Pfeifel: I think it's significant because it creates a new kind of engagement, which is around messaging person-to-person like most messaging platforms but also person-to-business or person-to-brand or person-to-publisher. It expands the platform beyond just personal communication.

Ad Age: But a brand or publisher could put a person on their end of that communication instead of a bot. So why is automating it with a bot significant?

Mr. Pfeifel: The main motivation is obviously scale. The ability to be able to respond to many users, assuming we are not talking about a few single ones but maybe thousands, obviously a manual solution like putting a call center behind it is not practical. I think that was the initial motivation, simply to allow them to work at scale 24/7 and improve the service. If we expect this to be a communication channel, you want the brand to be there all the time, no matter how many people contact it. This requires an API [an application programming interface that others' computer programs can plug into in order to post data to and receive data from the service].

Ad Age: Has Imperson been able to use Facebook's Chat developer tools to build a bot on Messenger?

Mr. Pfeifel: Yeah, certainly. We actually were, I think, one of the first customers who actually requested this API. We were doing virtual characters that communicated on Messenger even before they had this SDK [a software development kit that provides a framework for how a computer program can plug into a service]. But we faced all kinds of issues in terms of scalability. Just recently Facebook released this new SDK, which enables us to do virtual characters on Messenger in a more scalable and capable way.

Mr. Pfeifel: What Imperson does is we create virtual characters and personalities, typically of movie or TV characters or celebrities. And we hook into their Facebook pages and allow their fans to have conversations with them through the messaging interface on the page. Imperson provides technology that knows how to automate this conversation in a realistic way, so the user believes he is speaking with a character or even the actor doing the character. One of the issues we had previously before we had this new SDK was that the existing APIs Facebook had were not built to consider the scenario of automated responses. It was more tuned towards the person-to-person interaction, and this caused all kinds of problems. For example, if we were responding too fast, it was thinking we were trying to spam. The previous system before this new SDK was not really capable of handling massive automated response systems like we were deploying. I think one of the main goals of this SDK was to handle this change in paradigm where it's not person-to-person interactions but person-to-system.

Ad Age: Being able to have a conversation with a computer disguised as a fictional person is cool, but it's not that new. AOL Instant Messenger used to have bots. What's different about what's possible with chat bots today?

Mr. Pfeifel: I think there are a few different reasons why today it's more relevant and more attractive. We are taking familiar figures like celebrities; it's not just a chat bot that you speak with for the sake of your artificial intelligence curiosity. This is an entertainment experience. People chatting with Miss Piggy enjoy the experience as if they were chatting with the real Miss Piggy. In order to create the interaction, we were working with Disney people and Disney writers who actually write for Miss Piggy and make sure it's a completely authentic conversation.

Ad Age: How is the chat bot designed so that it's not obvious to people that the bot is sticking to a predefined script?

Mr. Pfeifel: This is the main power of our technology platform. It's a platform that is optimized and has very complex, sophisticated algorithms to ensure that the conversation doesn't look too scripted and we can respond dynamically to different scenarios in the conversation in a natural way. I believe we succeeded quite well.

Ad Age: Can chat bots for Facebook Messenger plug into other services, so I could be chatting with a movie character and then ask that character to tell me where the movie's playing near me or even buy the tickets from Fandango for me?

Mr. Pfeifel: Definitely. The conversation is all server-based and the personality we create can follow many different paths in the Facebook system. It can suggest a link that you can follow to buy tickets even. There is no real limit to what kind of content we can provide through the conversation. It can be dynamic content. It can be a conversation which is more entertaining. In the long run we will surely be able to interface with these kinds of services to provide different data. In our case it was not the main goal of the character. We were focusing on the entertainment element, but we just as well well could have done an interface with any kind of ticketing system.

Ad Age: What's different about bots on Messenger versus other messaging services?

Mr. Pfeifel: The main value that we got for the Facebook-specific project [with Miss Piggy] is that there is already an audience that is around the character. Miss Piggy already had a Facebook page with over 1 million followers. We opened up the chat experience for these existing fans. Campaigns go from the page and continue into the chat experience. This aspect is actually unique to Facebook.

Mr. Pfeifel: There are other platforms that can do similar conversations. On Twitter it's also possible. Theoretically we could have hooked Miss Piggy to Twitter through direct messaging. It's a matter of how that fits the campaign. If a customer is more socially active on Twitter and less on Facebook, we could have done the same thing on Twitter.

Ad Age: Are you able to incorporate information from someone's Facebook profile into the chat bot?

Mr. Pfeifel: The chat interface does not provide a complete profile of the users. It's mostly giving us the basic public profile of the user, which is the name and almost nothing more than that. It's very focused on providing a messaging experience. It's not an experience that replaces the apps you might have in Facebook, which can ask for permissions to access other elements of your profile. It's strongly focused on messaging only. If you want to access other types of information, you need to do it in other ways. It's not part of the Chat API.

Ad Age: Imperson made a Miss Piggy chat bot for Facebook, but it only works at certain times on certain days. It's not available 24/7, which seemed to be the value of the chat developer tools, as you were saying earlier. Why is that?

Mr. Pfeifel: It depends on what you are trying to achieve. In this case we are not trying to do some kind of service agent or customer support. For this character it's not a 24/7 experience because it's a celebrity. In this specific case, the marketing team for Disney suggested that in order to make this a realistic experience for a celebrity like Miss Piggy, she shouldn't be available all the time because how can she be on Messenger if she's now doing a show.

And now, our promised "interview" with the Miss Piggy bot: 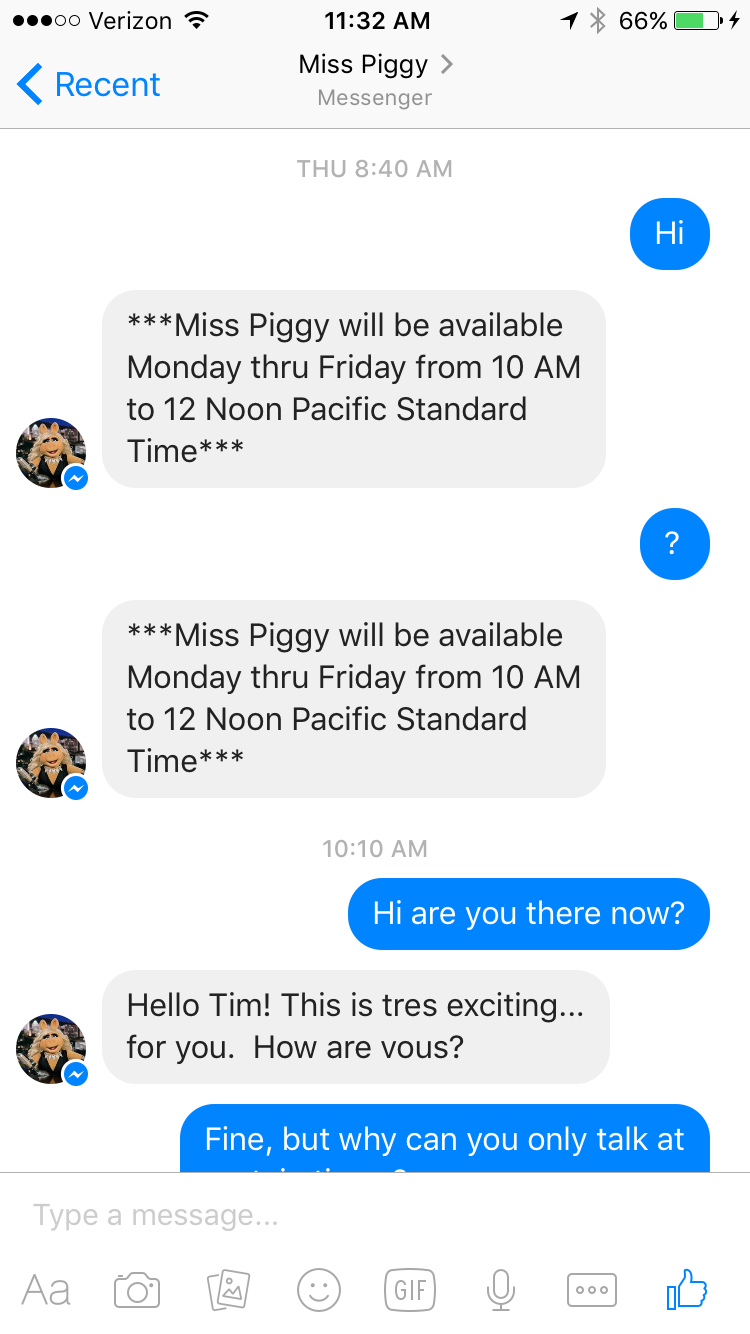 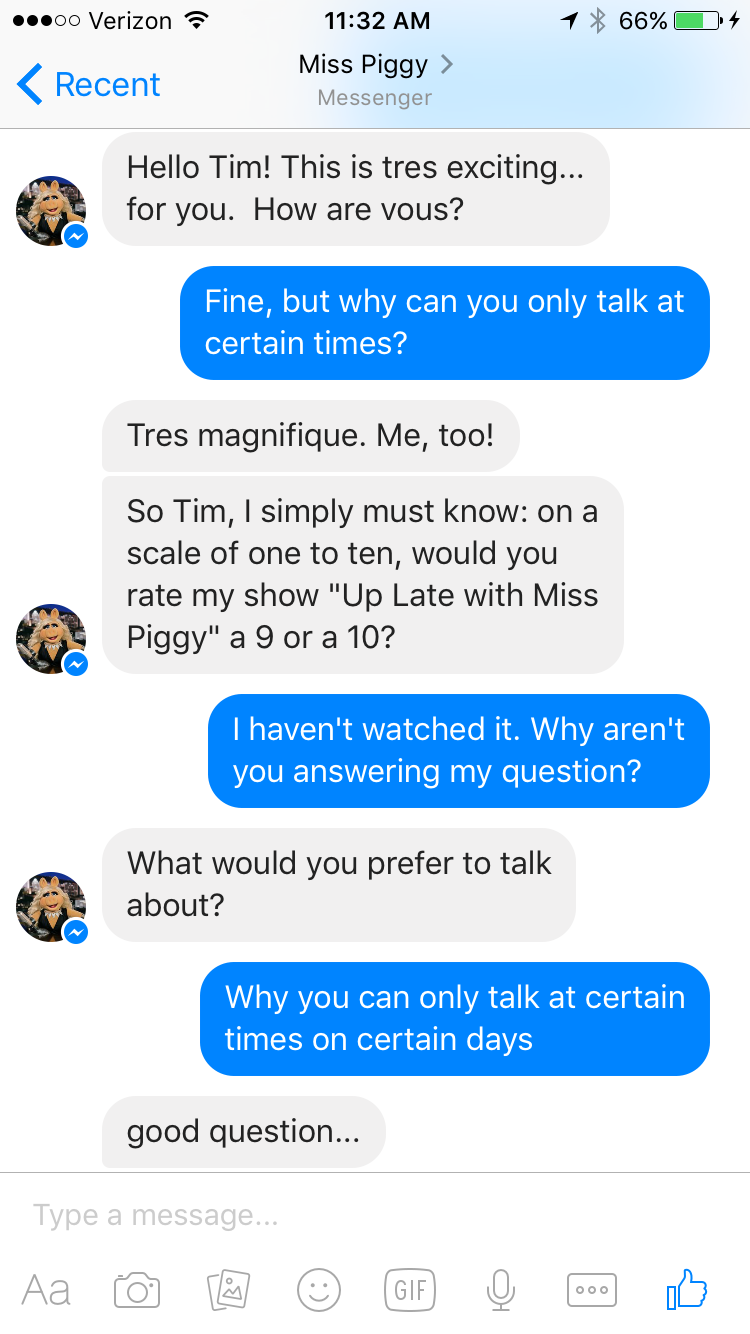 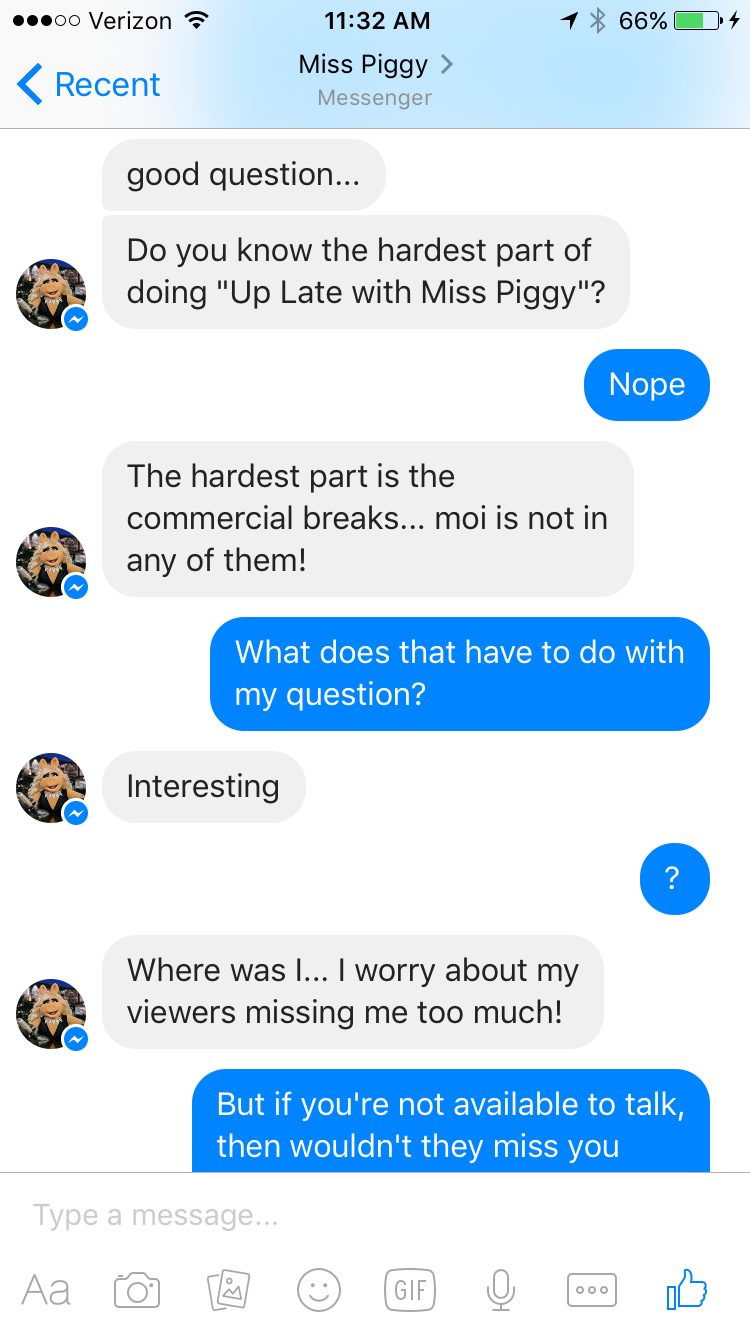 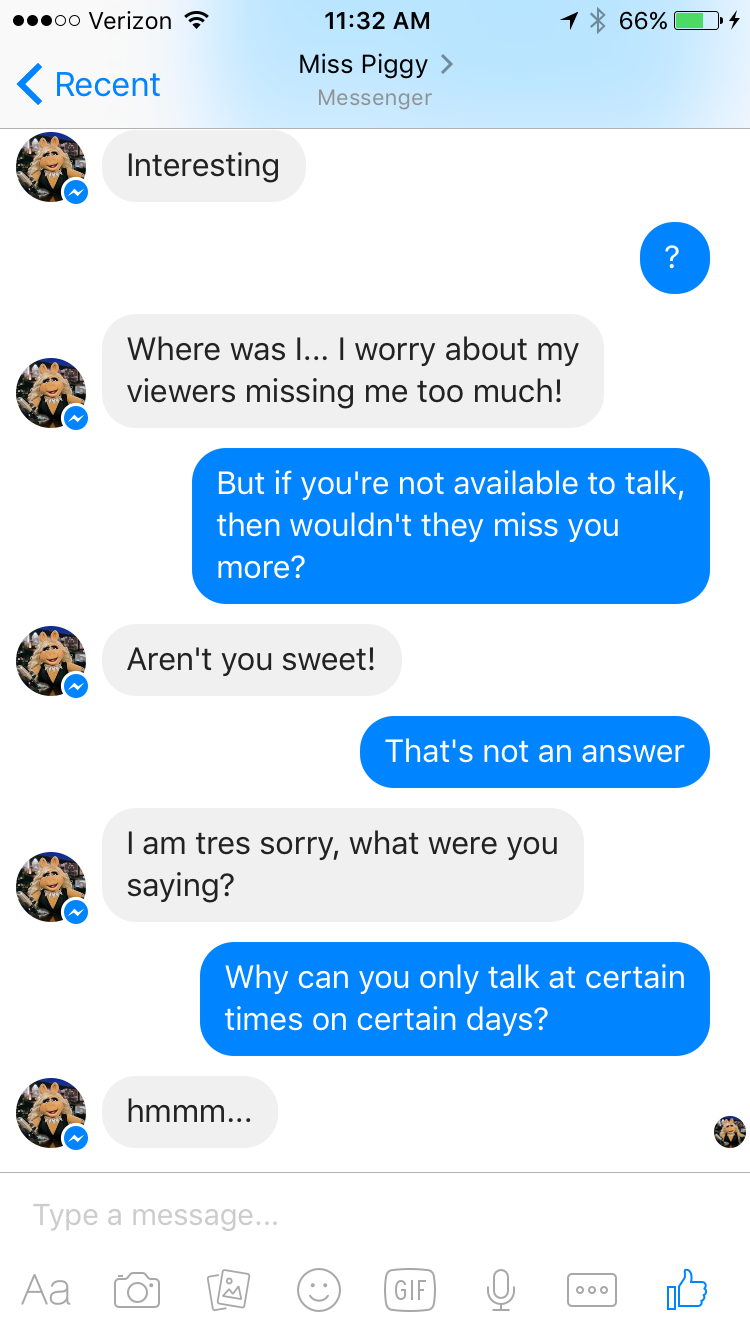