A Dramatic Series Set in the Future. But Where Are the Advertisers?
READ THIS NEXT
Amazon's TikTok ban was a false alarm, capping off a whirlwind week of suspicion towards China-backed app

YouTube has a vested interest in seeing its original "channels" succeed. One way to do that is to give them some healthy home page promotion, which is what happened for H+ Digital Series, a big-budget web production from "X-Men" director Bryan Singer.

H+ Digital Series had the biggest increase in views on Ad Age 's YouTube Original Channel Tracker last week, having grown by 262% over the week prior to land at No. 21. Four of the channels' episodes were spotlighted on the YouTube home page on August 27. Since then, all four of the videos have at least doubled their views. The first episode, for example, had 260,935 views on August 27 and has 566,732 views today.

Premiering at the beginning of August, H+ is set in a future world where people have a computer implanted in their brain, called H+, which allows their mind to connect to the internet around the clock. The story begins as a mysterious virus attacks the computers and kills one-third of the population. 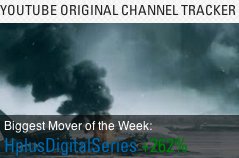 Episodes of H+ are between four and seven minutes and premiere every Wednesday. Taking inspiration from "Lost," the story is nonlinear. But unlike TV programs where you watch episodes in the order that they are aired, the YouTube format allows viewers to watch the episodes in whatever order they want. So each viewer has the potential to watch a very different show depending on which episode he watches at which time.

Produced by Bryan Singer -- director of "X-Men" and "The Usual Suspects" -- the series stands out amongst the other YouTube Original channels for its super slick cinematic production style and for the fact that it is drama, whereas most YouTube series tend to be comedies.

And unlike most YouTube productions, this series had a budget at just under $2 million (sizable for the web, miniscule for Hollywood) to cover the costs of creating this 255-minute series, action scenes, special effects and all.

Like all YouTube originals, the business model is sponsors and advertising, although the ability to release H+ in another form, such as a movie or two-part miniseries, is also possible. Bryan Singer told the AP that this flexibility "was necessary for any chance of making money."

YouTube gets first option to sell ads for the series until it recoups its investment. Right now the series is running with pre-rolls for, well, YouTube, which isn't a great sign.