Why should a marketer pay for video ads that aren't even viewed for 2 seconds? It's perhaps the most important question going in mobile marketing, with brands pushing back against the very notion that many ads on platforms including Facebook, Snapchat and Twitter have the chance to make much of an impact.

But it's also a matter of debate.

Here's what Marc Pritchard, chief brand officer for Procter & Gamble, recently argued in a "wake-up call" to the industry at Dmexco in Germany this month: The average ad view on digital platforms is 1.7 seconds. People are on social media to interact with friends, he added, and are not interested in ads. No wonder brands' creative attracts just a brief glance most of the time.

Pritchard acknowledges marketers' shortcomings in all this, saying brands make a mistake trying to shoehorn TV-style 30-second ads into the digital environment. His solution is to improve the creative execution so that they do work in 2 seconds if necessary—but he also argues that marketers deserve more than that for their money. 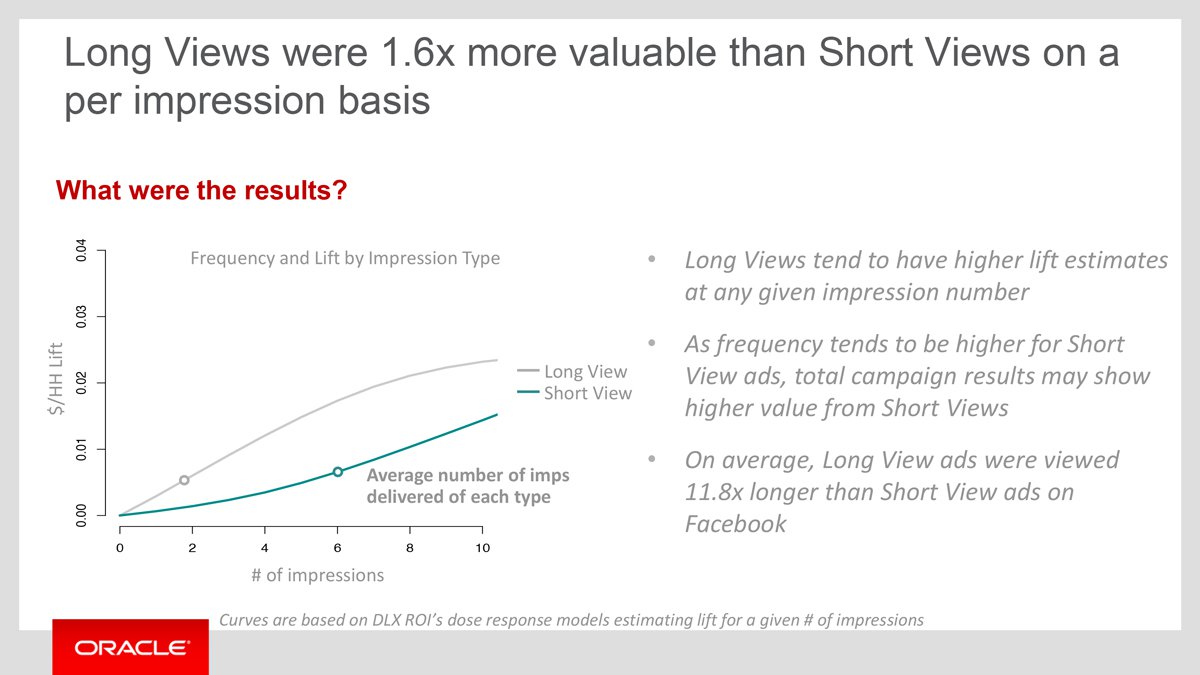 A new study conducted by Oracle Data Cloud and Facebook shows video ads that are seen for less than 2 seconds do help drive sales. Not only do they contribute to the goals of an overall ad campaign, but they can be a big part of the success of a campaign. The research showed that views under 2 seconds drove 52 percent of the sales lift measured from campaigns that were suited.

"Spoiler, they do drive sales outcomes. Albeit less so than longer length videos," says Eric Roza, general manager of Oracle Data Cloud. "What we found is that the ads that are below 2 seconds had about two-thirds of the value of video ads above 2 seconds in specifically driving in-store sales lift for consumer products."

The Oracle research is just a first attempt to quantify the real impact of such short video views on Facebook, but it's a start. Here's how it was conducted: Oracle looked back at 14 ad campaigns from consumer goods companies, and broke out each ad impression by the length an ad was seen, below 2 seconds or above. Then it calculated how much each group contributed to the sales lift for each campaign.

The study found that video ad views less than 2 seconds were about 60 percent as valuable to marketers as longer views, but still far from worthless.

"This is not just anecdotal," Roza says. "We've gone very deep on this doing the work over months to answer this core question: What is the value of short view ads?"

Facebook is particularly interested in proving the value of two seconds to an advertiser. The social network's users are notoriously jumpy and ready to swipe away from any unwelcome content. If marketers won't pay for a fleeting video view, that hurts Facebook revenue.

Roza says there are many factors that could impact the value of two seconds, including the age of the consumer, the creativity of the ad and the type of brand. A teenager can get the basic idea of a message in fractions of the time it takes an older viewer, or so the argument goes.
"The fact is, this is how people are taking in content and media today and so marketers are figuring out how to deliver messages and create value in those short time frames," says Brad Smallwood, VP of marketing science at Facebook. "The data validates there is value that happens in shorter time frames, and marketers should be looking at that and figuring out how to enhance that value because it's not 5 or 10 percent of the value of a campaign. It's more than 50 percent of the value."

The Oracle study was just a preliminary look at a select few campaigns, and Oracle promised to continue the research. Oracle recently bought Moat, a video viewability analytics firm, and it owns Datalogix, which can track the path consumers take from seeing an ad to purchase.

Facebook plans to start selling ads using the Media Ratings Council's viewability standard of two seconds, but as one option among several. Brands will also be able to buy 10-second and completed views, or impressions, which is any time an ad simply loads for however much time.