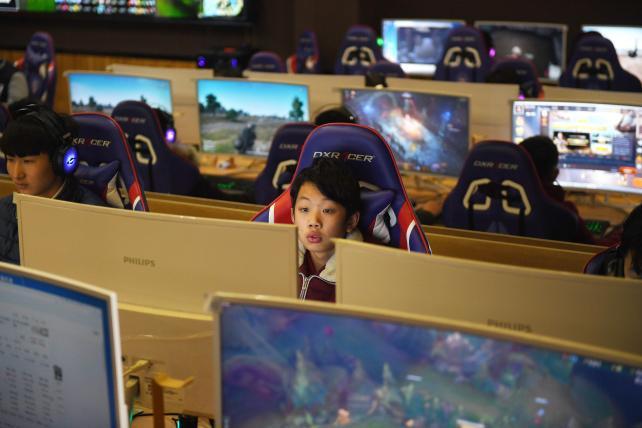 This photo taken on January 29, 2018 shows a student using a computer in an eSports class at the Lanxiang technical school in Jinan, in China's eastern Shandong province.
Credit: GREG BAKER/AFP/Getty Images

Xi Jinping's government has demonstrated a unique ability to exert control over everything from political speech to the internet. It may now have met its match: China's children.

The country's kids have taken to digital games like those around the world, playing hours of Honour of Kings and PlayerUnknown's Battlegrounds. Their enthusiasm has made China's the world's biggest game market and enriched companies like Tencent Holdings.

Now the government wants to break up the party. The Ministry of Education is leading a plan to curtail the number of online games in the country and limit the amount of time children play games. Parents are supposed to stop their kids from spending more than an hour a day on their electronics for non-educational purposes.

But how? That's the question for parents everywhere there are game-addicted children. The Education Ministry doesn't offer specific ideas about techniques for stopping kids from hopping onto a computer or smartphone. Chinese parents seem likely to be just as incapable of regulating game use as parents in other countries.

The ministry offered the game guidelines as part of a broad plan to address the growing incidence of myopia among children. The push, personally championed by Xi, is aimed primarily at reducing nearsightedness in children and teenagers by at least 0.5 percentage point a year till 2023, according to a statement posted on the ministry's website.

Still, the move seemed as much an admission of widespread game addiction as an assertion of policy goals. The ministry encouraged parents to send their children outside to play -- without electronics.

Investors homed in on the game restrictions and their implications for companies like Tencent and Netease. Tencent shares fell as much as 5.3 percent in Hong Kong, while Netease tumbled 7.2 percent in New York.

The onus may ultimately fall on the gaming companies themselves: Tencent for instance in 2017 instituted time-limits for minors after state newspapers singled out its signature title, Honour of Kings, for encouraging addiction.