What's the Difference Between SEO and SEM?

Your Questions Answered: Search
READ THIS NEXT
TikTok tactics: What to know about reaching audiences on the social media platform

Search-engine optimization, or SEO, is the key to making content rank highly in natural or organic search results. And while these "free listings" in a search-results page are technically, well, free, most companies pay folks trained in the art of SEO to keep their content atop the list. Search engine marketing, or SEM, refers to the paid ads that show up in the sponsored links or sponsored results boxes.

THE "ART OF SEO?" WHAT DETERMINES WHERE A WEBSITE TURNS UP IN THE NATURAL SEARCH RESULTS?

Relevance. And Google determines relevance by what the industry calls "link love" -- how many other sites are linking to your content and the quality those sites (as determined by their own "link love.") In search engines, links are like votes. Increasingly, social media tools, such as blogs, social bookmarks and social networks, are helping drive search results -- so make sure your content can be easily linked to and picked up by those sites.

WHY IS PAID SEARCH SPENDING SO STRONG?

Couple reasons: First, search tends to convert at a higher rate than most non-search ads because it's an intent-driven channel. Search expert and Ad Age Digital columnist Danny Sullivan calls it a "reverse broadcast system." In broadcast, he writes, "advertisers spend lots of money to reach a mass audience, hoping to build desire for a product or service. But most of the audience is not interested in their pitches. ... Search is the reverse. Each search is an expressed desire, something that someone at a particular time actually wants. Search engines consolidate all those desires into one place, making it possible for advertisers to tune in to the 'desire-cast' that's going on." Second, search's click-based payment model makes it easy to track the investment since an advertiser only pays when its ad is clicked. Smart search marketers track performance all the way down to conversion -- did that click result in a sale? -- to really take advantage of the channel.

HOW DO THE SEARCH PLAYERS STACK UP?

Google leads the category in the U.S. -- but what's surprising is the giant continues to gain or maintain share, even off such a high base. Google has notched 58.5% share if you go by ComScore, 66% if you ask Hitwise. Its challengers, meanwhile, have struggled. Per ComScore, Yahoo has 22.2% share, Microsoft 9.8% and Ask.com 4.5%.

HOW DOES ONE BUY SEARCH?

Search is sold on an auction based system, invented by early pioneers Inktomi and popularized by Google's AdWords system. (By the way, AdSense is Google's content network; while marketers can buy text ads on AdSense, the network is not the same as search.) Search advertisers bid to keywords and choose the maximum price they're willing to pay when a user clicks on them. But when it comes to paid search, the highest bid doesn't always get the top placement; search engines also factor in quality scores -- how likely is a search ad to be clicked? A search engine's revenue, remember, is a factor of price per click times number of clicks.

DOES OFFLINE MEDIA FACTOR INTO SEARCH?

Absolutely -- a study from Aegis-owned search-marketing firm iProspect revealed 67% of the online search population is driven to search by offline channels. Other studies, such as Interpublic-owned Reprise Media's annual Super Bowl search-marketing report card, shows that having a strong search marketing and social-media effort can greatly extend the life of an offline campaign.

SO SEARCH IS RECESSION PROOF, RIGHT?

Nothing is recession proof. Because the ROI on search is highly measurable, it's often considered to be less susceptible to an economic downturn -- but remember that search is a supply-demand equation. And if people are clicking on fewer ads and converting (buying) less, ROI will drop and search spend will follow.

Google universal search aggregates results not only from text based media but also photos and videos. And it has opened the door to video ads on search results pages, which Google is rolling out in beta. Mr. Sullivan suggests that could, in turn, open the door to CPM-based search ad pricing. Video ads, he write in a previous column, "open the door for the payment structure to change. Anyone remember that Google ads used to be CPM-based? CPM, of course, is nice for building brands. Impressions can matter more than clicks, and video might allow CPM-based ads to return to search pages. That will be especially useful in Google's quest to woo budgets from big accounts looking to build brands." 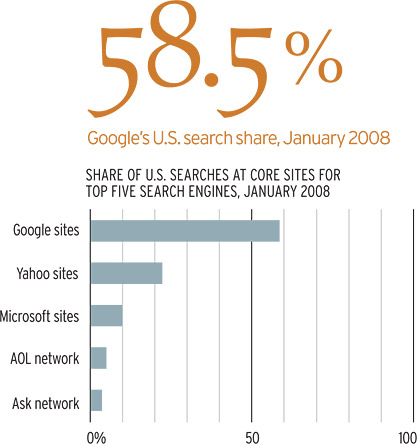 Includes affiliates but not subsidiary sites. Google, for example, excludes YouTube and non-affiliate sites that may say "Powered by Google." Source: comScore qSearch 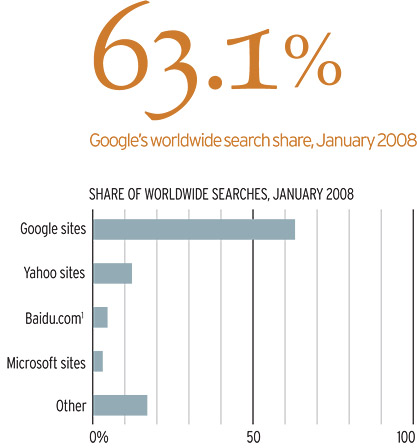 THE BUSINESS OBJECTIVE: For client Diageo, WPP search-marketing agency Outrider (part of the holding company's Group M unit) wanted to create product awareness and brand engagement for Smirnoff Progressive Adult Beverages in the summer season. The campaign targeted two brands, Smirnoff Ice and Smirnoff Raw Tea. The goal was to drive visitors to the brands' websites, where they could enter a sweepstake competition and see a goofy video called "Tea Partay." The video featured wanna-be rappers called the Prep Unit who live in the suburbs, wear Docksiders and polos and brag about drinking Raw Tea and eating finger sandwiches.

THE CAMPAIGN: A cross-channel distribution of ad messages that placed media in content-targeted areas -- for example, queries around sunny weather or hosting a party. WPP's Beyond Interaction was a partner.

THE SEARCH FACTOR: This was the first search program for Smirnoff Progressive Adult Beverages, and off the bat Outrider faced a major boost and a major challenge: the "Tea Partay" video was an instant success, but due to Google's alcohol policies, Outrider couldn't advertise on Google.

"When you remove Google from the U.S. equation, your options are diminished greatly," said Chris Copeland, CEO-Americas of Group M Search. "But it allowed us to put all our efforts toward Yahoo, and we were able to, at times, have more than five paid placements and well as multiple organic listings, which enabled us to really own the space."

By running campaigns for Smirnoff Raw Tea and Smirnoff Ice side by side, the agency was able to leverage the audience for one brand to build interest in the other. Outrider bought typical keywords, such as "Smirnoff Ice," then extended to terms such as "finger sandwiches," "preppy," "hilarious video" and "hip-hop music" to drive more traffic to the viral video. (Finger sandwiches actually had one of the highest click-through rates in the campaign.) Search terms also were used to drive display. For instance, the keyword "Fourth of July Atlanta" was linked to a paid ad for Raw Tea and a Fourth of July roadblock negotiated with Citysearch that featured display ads for the Smirnoff brands.

THE RESULTS: The campaign generated 14.9 million search impressions in four months, with the integrated search and display campaign delivering 600 million impressions and 2 million clicks. The "Tea Partay" videos have had more than 5 million views, and the campaign won this year's Yahoo Search Light Award, which honors excellence in search.

"We felt best about how tightly everything fit together, "Mr. Copeland said. "The videos and the display and the search all felt like a cohesive communications plan played out."
-- Megan McIlroy