Brands may be plowing more and more money into Facebook ads, but the creative results are decidedly mixed, with all-too-common flubs such as blurred product shots and incomprehensible pitches.

Not all Facebook ads are creative clunkers, but the company will have to close the wide quality gap to convince marketers that they must buy media on the platform and thus justify its forthcoming $100 billion initial public offering.

To help agencies and brands make better ads, Facebook's measurement team is making public its research on what does and doesn't work.

Like Facebook's recent study of best practices for brand-page postings, these findings aren't revolutionary and some are even obvious. Yet glance at a few ads and you'll see that many of these best practices, common sense though they may be, are ignored by big brands.

First, after talking with marketers, Facebook distilled six elements of ad creative. Two of the elements are visual: focal point and noticeability. The other four involve messaging and consider a range of things, from whether it's easy to discern the brand to whether the advertiser gets the point across.

The measurement team then asked 109 marketers to rate just under 400 ads on each of the six elements. All the ads examined were from a Facebook format called premium-engagement ads, which appear on the right column of a Facebook page and carry tight restrictions on image size and copy length.

The ads were also meant to communicate brand or product attributes, as opposed to direct response.

After plugging those ratings into a quantitative model, Facebook found that high ratings in the six elements were predictive of in-market success in two traditional metrics: brand recall and purchase consideration, as measured in Nielsen Brand Effects studies.

The overall model devised by Facebook explains 20% to 25% of variance in market performance, according to Sean Bruich, head of platforms and standards at Facebook. The study doesn't seek to explain how reach or the nature of the brands themselves may affect the effectiveness of a particular ad.

When it came to recall, three things were particularly important: The image needs to have an obvious focal point, the brand needs to be clear and the ad needs to fit with the brand's personality.

Focal-point fails are pretty common. Facebook ad formats don't allot a ton of space for images or text. To deal with the restraints, many brands opt for an image that might include tiny renderings of the product line on, say, a funky background, meant presumably to suggest movement—or something. Whatever the intent, fuzzy, out-of -focus shots get in the way of consumers' remembering your brand.

Ads should also be clear about what brand they're promoting, which, again, sounds pretty basic until you look around and see the number of ads where the brand name is obscured and its logo, colors and overall feel are AWOL.

The sample high performer in this regard was a big-brand ad containing both the tagline and a new holiday TV commercial. The creative looked as though it could have been ripped from a TV or print ad. While this guideline could be an opening for make-the-logo-bigger types, the lesson is that Facebook ads don't have to swerve from a brand's usual visual and messaging approach.

For purchase consideration, only one element proved particularly crucial: Does the ad reward the viewer? Mr. Bruich said that this need not involve free stuff, and could be informational or even emotional.

One high performer was from a prestigious brand inviting people into one of its communities. In contrast, a lesser-known brand merely sought information from the viewer, with no clear indication how it would be used.

"Ads that were rewarding tended to be pretty clear -- there wasn't an overload of information," said Mr. Bruich, who conducted the study with measurement researcher Adrienne Polich. "But [the] rewarding ads also seemed to connect. The information seemed meaningful."

The importance of reward, the single-biggest creative predictor of an ad's success, caught Mr. Bruich and his team by surprise. They'll most likely conduct follow-up studies of what reward means on an industry-by -industry basis, as well as dig deeper on what generates reward.

The Facebook study, which will be presented at the Advertising Research Foundation conference next month, was also useful for showing what isn't particularly important to creative success on the platform. For example, noticeability.

A high degree of noticeability was not predictive of either recall or purchase consideration—a dagger to the dreams of those who think bright colors, promiscuous use of exclamation points and Crazy Eddie-type come-ons are the fast track to social-media success. 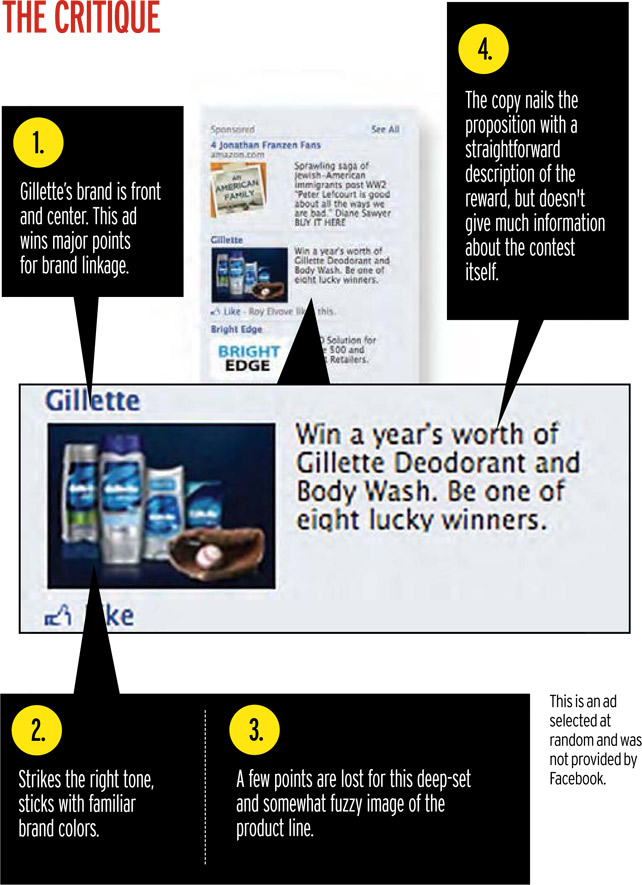 Carl's Jr. and Hardee's to get a Twitch-sourced menu item