Social Network's Internal Creative Team, The Factory, Is Now Up to 40 People
READ THIS NEXT
Square to buy Jay-Z's Tidal music service and appoint him to the board
One of Facebook's ads
Credit:

If you're an American using the most popular of social networks, chances are good you've seen an ad for Facebook on Facebook recently.

That's the result of an ongoing and open-ended campaign dubbed "Where will your friends take you?" that kicked off in the U.S. in January. (It began running in the U.K., Canada, Australia and New Zealand a month earlier.) With the exception of a TV spot that aired on Mothers Day, the broadly-targeted campaign is limited to Facebook as a medium. Comprised of videos and static photo posts that are "sponsored" in users' news feeds, the ads are various takes on the theme of friendship.

The work comes from Facebook's internal creative team, The Factory -- which is now up to 40 people -- and agency-of-record Wieden & Kennedy. Leading the effort is Facebook's head of brand marketing Rebecca Van Dyck and executive creative director Scott Trattner, who joined the company from TBWA/Media Arts Lab six months ago. The two are close collaborators who previously worked together on Apple, when Ms. Van Dyck was there.

For a comparison to how other tech companies have approached building their internal creative teams, Apple is in the midst of building out a 1,000-person internal agency and pitting it against TBWA/MAL, Ad Age has reported. Google's Creative Lab -- which steers some of the brand's most high-profile work -- is said to have fewer than 100 people.

Ad Age spoke to the Facebook duo about how they're building The Factory, what metrics they're watching, and why they need to message to Facebook users who are already active. The conversation has been condensed and lightly edited.

Ad Age: What was the thinking behind this?
Scott Trattner: When I came in, one of the questions we were asking ourselves [was], "People understand Facebook as a product pretty well, but do they understand it as a brand?" And I think when we started asking those questions, we weren't really sure if people knew what we stood for. We know that this is a great product to connect people, and it started out as something connecting college students, and now we're attempting to connect the world. [And] we came onto this notion about friendship. So we're really going at this basic idea -- just to let people know we stand for friends.

Ad Age: How long will it go on for?
Ms. Van Dyck: Unlike a normal campaign, which would be like a six-week burst, we definitely feel like this is the start of a conversation we're having with our community, so we're in it for the long haul and there are a lot of facets of friendship we can go in, so we actually don't have an end period for this. We're just going to take it and explore where it takes us.

Ad Age: How do you gauge the sentiment?
Ms. Van Dyck: We use the same tools our clients do. We use something called Nielsen Brand Effects. What that is is a poll in the product. We ask the same questions of people who have seen the video or the ad and those who haven't. And we can see if there's been a lift in sentiment between those who have been exposed and the control group. 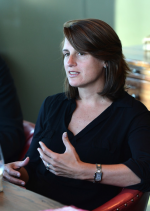 Ad Age: What about your creative team? How do you go about creating these images and spots?
Mr. Trattner: We've named this creative studio of sorts The Factory, which is a riff on Andy Warhol's Factory -- not the "we're stamping out widgets" [type of] factory. It's a really eclectic grouping of different folks, from engineers to filmmakers to artists and art directors, copywriters, strategists and business folks. ... Equally, we're working with outside partners like Wieden & Kennedy for their incredible creative chops and that outside perspective that sometimes when you're inside is hard to see.

Ad Age: Are you modeling this on how you worked at Apple, or is it different?
Ms. Van Dyck: There are some things that are the same and some things that are different from, not just Apple, but any creative organizations we've worked with. One thing that's the same is building this creative center of gravity. In the past we didn't have that at Facebook. We were different departments and fragmented. ... One thing I think is different that I love is the combination of engineering and design. That actually is very organic and natural to Facebook. When we've worked at other agencies and clients, that would be a forced thing to happen, [but] it just grew out of the culture here. So we have our designers and copywriters and strategists and engineers make up a team. What that means is it's not just coming up with a conceptual idea, but we can take that idea and bring it into an in-product experience. One of the things we loved recently was the "look back" video [a photographic retrospective of users' years on Facebook to commemorate the company's 10th year in business]. [It] was a way for Facebook to say thank you, we made this little gift for you. That was a creative idea that couldn't have happened without that collaboration with engineering.

Ad Age: Roughly how many pieces of creative are you producing for this campaign? I seem to see an ad every few days.
Ms. Van Dyck: Oh good, it's working.
Mr. Trattner: That's the same feeling I have. I'm happy folks are seeing it.
Ms. Van Dyck: There's a little science behind the madness. In order to create an effective measurement result, we need some consistency so we can compare between time periods. So we are roughly looking at [serving up] about one video per week and two static posts, so three a week.

Ad Age: Why did you decide to do a TV buy around Mother's Day. Are you considering more of them?
Ms. Van Dyck: It isn't something I see going on that kind of trajectory. We would like to take [the campaign] into more markets. … As it relates to when to use television and when not to, I think we're more interested in the idea of what are those cultural moments that are really great days on Facebook. Mothers Day is one of them. That might be something we want to go a little bit louder with.