Foursquare Rolls Out Visualizations of Your Check-Ins, Sponsored By Samsung | Ad Age
Skip to main content

Foursquare Rolls Out Visualizations of Your Check-Ins, Sponsored By Samsung

Foursquare has partnered with Samsung for My History, a new feature that will provide users with infographics based on their check-in histories.

The individualized heat maps are branded with Samsung's logo for its latest high-end smartphone the Galaxy S4 and features a tab titled "The Next Big Thing" in which users can receive recommendations on places to visit based on where they've checked in before. The partnership is worth seven figures for Foursquare, according to an executive familiar with the terms. 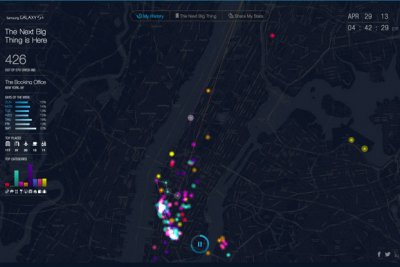 Foursquare declined to comment about the specifics of the financial arrangement. Samsung did not immediately return a request for comment.

Foursquare users can access My History at foursquare.com where they can watch their entire check-in history -- which dates back to 2009 for the app's first users -- unfold in fast forward. A play-pause button at the bottom of the screen allows to users to stop the experience and note certain behaviors such as distance between subsequent check-ins and when they checked into a certain location. The infographic can also show users how much times they spent in coffee shops versus bars among other comparisons.

My History is the latest instance of Foursquare incorporating more advertising into its service and allowing marketers more access to its location data. Foursquare is currently running an HBO-branded Game of Cones contest in New York City, for example. Whichever of the participating ice cream shops accrues the most check-ins by June 21 will be awarded the "Iron Cone" a la the Iron Throne from HBO's "Game of Thrones."

Samsung began working with Foursquare at South by Southwest (SXSW) this February when the electronics manufacturer promoted Samsung charging stations on the app.

Ads for My History will appear within Foursquare once the company rolls-out its "post-check-in" ads in the coming weeks. Those ads will be served to users once they check into a specific location.

Foursquare has recently been under pressure to prove it can generate revenue that will justify its $760 million valuation. The company earned $2 million in ad revenue in 2012, but has started developing new ad products this year -- including paid Foursquare promotions for small businesses and letting marketers use its data to target users elswehere on the web.

My History, then, is not just a way for Foursquare users to understand their own habits, but a glimpse into one of the ways Foursquare can package its users' location data when pitching marketers.