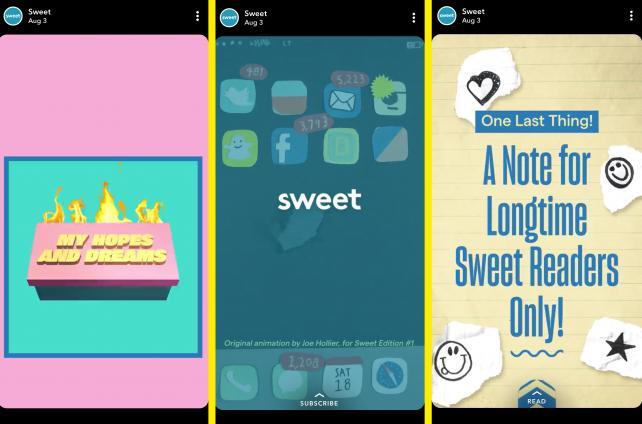 Even Snapchat publishers are switching to video.

Hearst's Sweet, the first Snapchat-only media property, is closing its daily digital magazine, but the brand will be kept alive with a new show under that name. Other video titles will be available as well. The publisher has fired some staff as a result of the change, but would not say how many people.

"Our video-focused stories have always been a consistent performer, so we've decided to focus on that format exclusively for the Sweet channel going forward," a Hearst Magazines spokeswoman said in an email statement. "We are currently in development on a slate of new shows, one of which will be called 'Sweet.'"

In 2015, Snapchat launched Discover, a media section inside its messaging service, with about a dozen publishers, including Hearst, BuzzFeed, Vice, DailyMail, ESPN and Comedy Central. The publishers built daily channels filled with multimedia articles, videos, GIFs and other Snapchat-inspired flair. Later that same year, Snapchat and Hearst Magazines teamed up to create Sweet, a youth-serving lifestyle and culture publication.

Shows are different than the daily Discover channels, less like digital magazines and more like short-form television programs. Last year, Snapchat started focusing more on video and media companies like Viacom reimagined MTV shows like "Cribs" to fit the app. Snapchat is competing with Facebook, Twitter and YouTube for this type of mobile media entertainment to attract younger users, who watch less ad-supported TV.

Hearst would not say how many shows it was interested in developing for Snapchat.

Sweet, which Hearst said has 5.5 million subscribers on Snapchat, has stopped putting out new content, but plans to return to the platform under its new video focus in September. Hearst declined to comment on whether Sweet was profitable and how it measures its success. Sweet went through a round of layoffs last year, according to Digiday, including then-editor-in-chief Luke Crisell.

Sweet could keep its costs down and advertiser interest up by tightening its focus on a select slate of shows instead of producing a daily magazine, according to digital media industry executives.

"Shows make a lot of sense for the Sweet brand," says a digital publishing executive, who works closely with Snapchat and spoke on condition of anonymity. "They have a very targeted young audience, and this could give them the room to breathe, to create premium video that works for brands."

Snapchat splits revenue with its media partners, which comes from commercial breaks and brand integrations in the programs.

Snapchat had a redesign this year, which made the Discover section even more competitive for media, because all the Shows, digital magazine channels, and video stories now appear in the same stream. Sweet may have had a hard time in that environment, because it got lost alongside too many rivals, even other youth-focused publications from Hearst like Cosmo and Seventeen.

"Discover is now full," says the digital publishing exec. "There are so many other publishers there with much clearer brand propositions than Sweet."