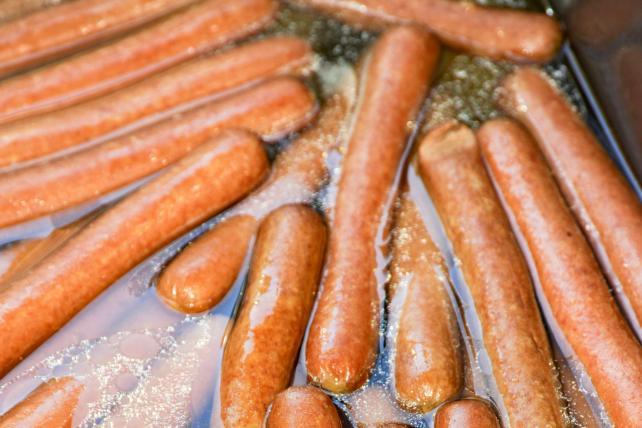 Dress it up in a fancy package, throw in some questionable health benefits and watch consumers come running. Or so goes the theory behind Hot Dog Water.

The "product," which showed up at a festival in Vancouver last Sunday, is pretty much what it sounded like: a single frank, floating in water. But hey, it came in a sleek bottle. Its health benefits ostensibly included increased brain function and vitality, weight loss, and a younger physique. It was also touted as gluten-free, Keto diet-compatible, and a great source of electrolytes (and sodium). All for $37.99 a bottle.

The fine print made things a little clearer: "Hot Dog Water in its absurdity hopes to encourage critical thinking related to product marketing and the significant role it can play in our purchasing choices."

The ploy was created by Douglas Bevans, who says he's a tour operator by trade and artist on the side. His goal, he says, was to show how easily consumers can be tricked into buying products with misleading or nonexistent health effects.

"I think we all feel particularly vulnerable in this era of pseudo-scientific health claims and the targeted marketing of social media," Bevans told us via tweet. "The message is the next time you have the urge to buy the latest quantum toilet paper or Gwyneth's magical health stickers, take a moment to reflect and ask yourself, is this Hot Dog Water?"

This booth that sells unfiltered hot dog water is hands down the strangest thing at Car-Free day, and I have no idea - literally none - as to whether it is real or an elaborate stunt pic.twitter.com/NK2KcTfnHm

If you wanna know why the world remains on fire , it's because there is a market for this: https://t.co/XaLNjAuuSq

Frankly, we relish our regular water, frank you very much. (Sorry.)