Video Site Beefs Up Content Amid Looming Competition From Netflix, YouTube
READ THIS NEXT
Facebook promises better guardrails for brands scared of the chaos in its News Feed

With Netflix's exclusive run of David Fincher's upcoming series "House of Cards" not expected to arrive until late 2012, another streaming-video site seems to have quietly gotten a head start in its own programming ventures. This summer, Hulu will debut three new acquired series from the U.K., Channel 4 and BBC Worldwide's "Misfits" (premiering June 20), Vuguru's "A Booth at the End" (premiering July 11) and BBC and Content Media Corp.'s "Whites" (premiering July 20) on Hulu.com and Hulu Plus . 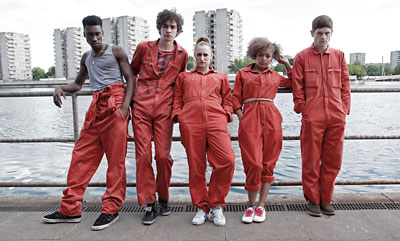 The new offerings follow a slate of first-run or exclusively acquired series that began in spring 2010 with 19 Entertainment's "If I Can Dream" and continued with other originals, such as Paramount Digital's "League of Extraordinary Dancers" and Hud:sun Media's "Genuine Ken." Although Hulu doesn't break out specific viewing numbers for any of its series, acquired or otherwise, originals frequently rank among the top 20 (even top 10) most-watched series of the day whenever new episodes are posted.

Much like Netflix or HBO, Hulu sees itself as a distributor of premium content rather than an owner or producer of original content. "We've stayed away from that if for no other reason than that 's a whole different set of capabilities to be really good at, which we do have a huge respect for," said Andy Forssell, Hulu's VP-content acquisition and distribution.

But what Hulu can offer that Netflix and HBO can't is advertising, with a focus on vertically integrated packages for advertisers looking to reach certain demos. In the case of "Misfits," a teen superhero drama, the show could be bought as part of a larger package that includes Syfy dramas like "Warehouse 13" and "Battlestar Galactica" or on a standalone basis. With the broadcast networks mostly taking the summer off from scripted originals, the season is a key time for Hulu to capture new viewers. J.P. Colaco, Hulu's senior VP-ad sales, said the site's viewers during the summer months tend to be under the age of 35, with a penchant for Anglophilia that should benefit the new offerings.

"In the past with shows like 'The Office UK' and 'Peep Show,' audiences are gravitating a lot in large numbers," Mr. Colaco said. "Attracting these demographics, which are very hard to reach on other platforms, is another way advertisers can draw value through their buys."

The shows will also be promoted through user recommendations after viewers watch similar shows. "Booth at the End" is recommended for fans of "Lost," "Fringe" and 24," while "Whites" will be suggested to viewers of shows such as "Spaced," "Kitchen Confidential," "Kitchen Nightmares" and "Top Chef."

Hulu plans to air one or two exclusive series a quarter going forward, in addition to the acquisitions. Just last week, it premiered AttentionSpan.TV's "Leap Year," a branded-entertainment series presented by Hiscox. The slate should keep Hulu competitive with other players such as YouTube, which is set to beef up its own original programming later this year. In April, Hulu ranked as the No. 10 most-viewed video site in terms of unique viewers and No. 1 in video ads viewed, according to ComScore.