An Inside Look at Snapchat's New Advertising API Technology

Snapchat has turned on the gears of its ad technology platform, unleashing a new way to buy and even test ads.

Snapchat has fired up its ads API -- application programming interface -- allowing third-party partners to plug into the app and deliver ads for brands and agencies. It's Snapchat's first foray into what's known as programmatic advertising, the automated buying and selling of ads.

The Snapchat ad platform has been under construction for months, and was unveiled in June, but until now key details of its inner workings were unknown. Would there be A/B testing with real-time data feedback on performance? How deep could targeting go?

Well, Snapchat has enabled ad testing -- known as A/B testing -- so that brands can experiment with different creative concepts at the same time, and then adjust their buys according to which does better.

As far as targeting, Snapchat already announced it would allow email matching, which lets a brand use its own customer lists to find those people when they visit Snapchat. It also has interest-based targeting and the ability to construct "lookalike" models to find similar consumers for ad campaigns. 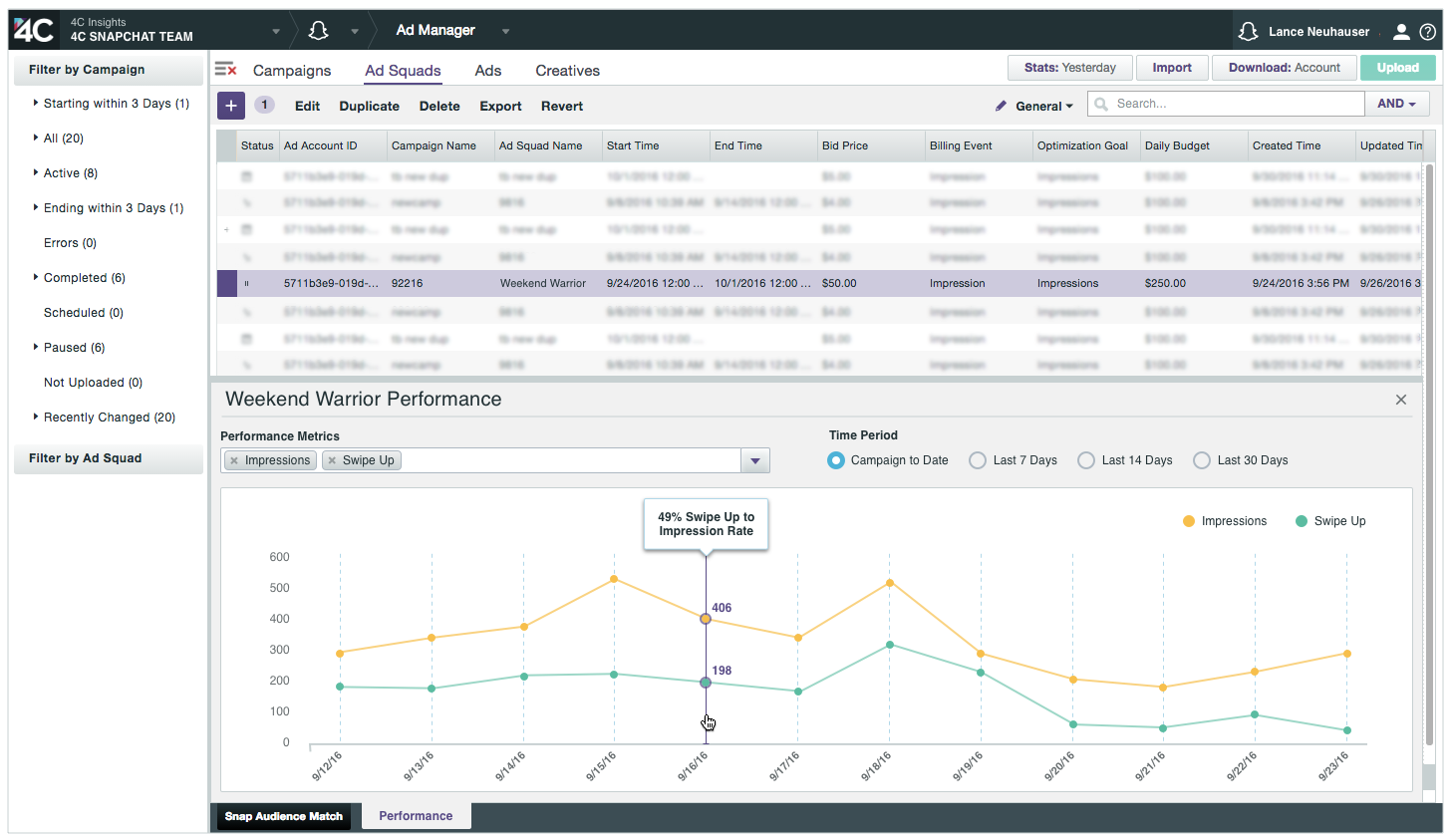 Agency and brand executives said that Snapchat also is working on even more sophisticated targeting techniques such as sequential messaging, a form of retargeting that hits users with new ad messages after they've engaged with an earlier one.

So far, brands like McDonald's, Unilever, Nissan and Gatorade are buying through the API, according to Snapchat partners who have plugged into the technology.

"The inbound outreach has been staggering," said Lance Neuhauser, CEO of 4C, a Snapchat partner, discussing the number of calls they've been getting from advertisers interested in the API. "Snapchat will make it easier for them to buy Snap ads at scale in a streamlined fashion and they will be able to apply real-time data, performance visualization and other analytics tools."

The "visualizations" come in the form of web-based dashboards that advertisers use to see how Snapchat ads are doing in terms of number of views, how long videos are watched and other "real-time" reporting. The technology partners also buy ads on other platforms like Facebook, Instagram, Pinterest, Twitter and LinkedIn, and now with Snapchat in that mix they can track how all the channels compare to each other, and adjust media plans accordingly. 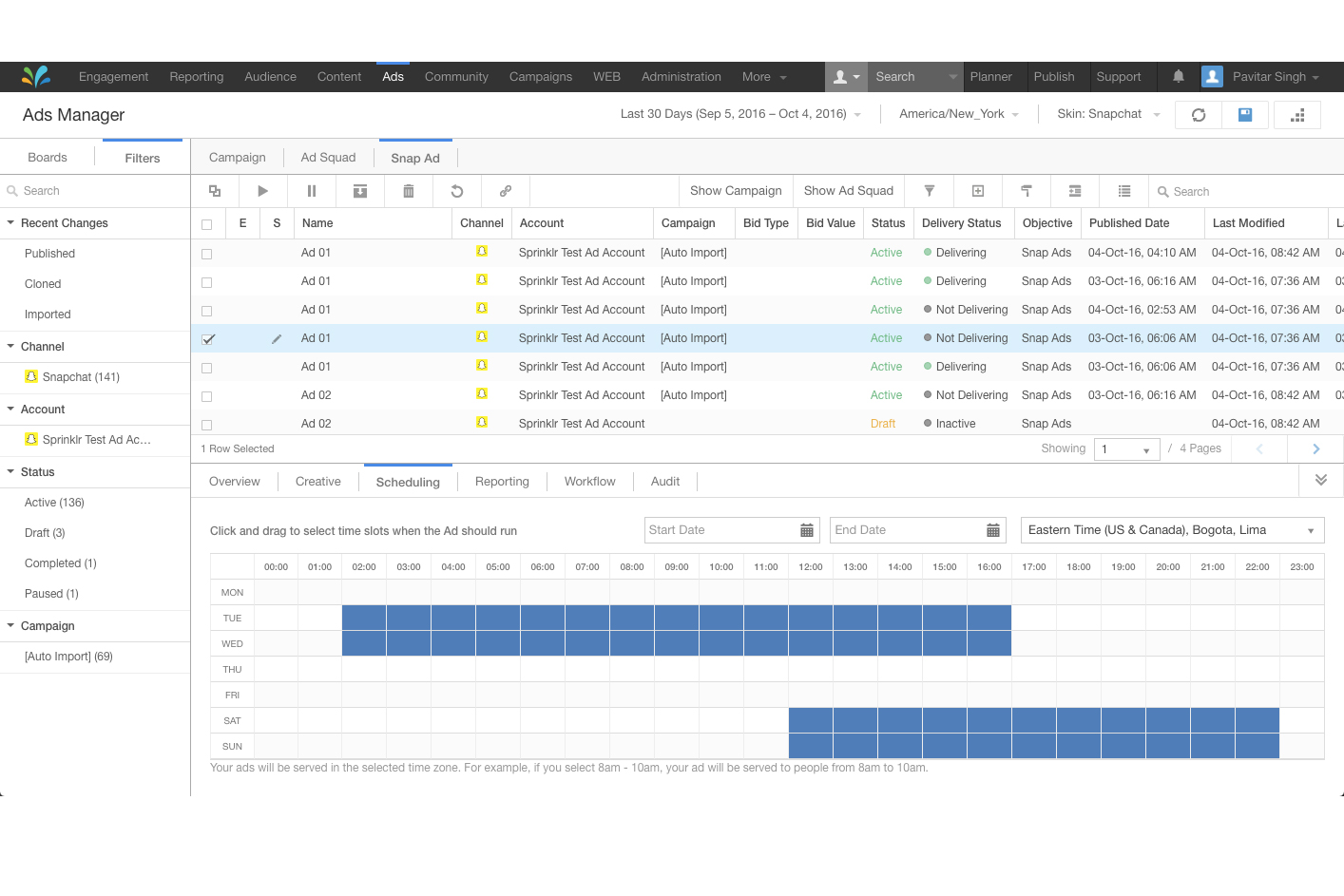 That matching puts Snapchat further into competition with Twitter and Facebook, which both are considered second-screen companions for people watching live TV broadcasts like NFL games. The API has some high-tech capabilities like interest-based targeting, directing ads to people based on their activities on Snapchat, such as what Discover channels they watch. There's also the ability to include weather factors into targeting and to sync ads to run when certain TV program run, according to API partners.

Still, the API does not have every capability yet, including allowing certain forms of retargeting that Snapchat's CEO has called out as too annoying, when the same ad follows a user around the internet.

Snapchat has hinted to marketers it would open sequential messaging, according to one top advertiser on the platform. Brands would like to target video ads to groups of people who, say, played with one of their lenses, which are animated filters that decorate selfies.

"The millennial group is pretty varied, so what an API allows is better targeting," said Viji Davis, CMO at Resolution Media, a division of Omnicom Media Group. "You don't just target millennial audiences, but target people who are actually engaging. So, that's what remains to be seen, if once we get some data points, can we see how people engage and how we might retarget them."