Facebook isn't placing ads on its photo-sharing service Instagram, so brands and celebrities have started taking matters into their own hands. From Unilever to Nike, marketers are cropping up in sponsored posts on the platform, but Facebook isn't earning any revenue from it.

It was just a few months ago that a change in Instagram's terms of service that would permit the use of any images on the social network in advertising set off alarm bells with users. Celebrities, photographers and brands such as National Geographic threatened to delete their accounts for fear that their images would turn up in advertising, and within days Instagram co-founder days Kevin Systrom reverted the terms of service. 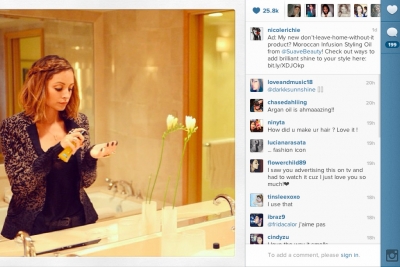 Celebrity Nicole Richie using a product by Unilever's Suave in an Instagram photo.

Instagram had to backtrack and make it clear it wouldn't take users photos and use them for advertising without permission. But then it left questions: What would ads on Instagram look like? How and when did Facebook plan to turn Instagram into a business?

Some speculated ads were part of the motivation behind the introduction last month of the new Instagram news feed, but there's no indication that's happening in the near term.

In the meantime, advertising is going on Instagram without permission or pay to the social network. Brands are experimenting with the platform and teaming up with celebrities for sponsored posts. But neither Instagram nor Facebook is seeing a dime from such deals. 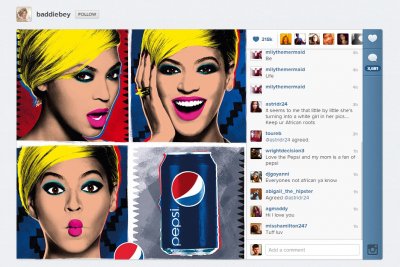 Case in point: This week, a sponsored post made its way out into the wild when celebrity Nicole Richie, who has nearly 750,000 followers, posed in a photo while using a hair product made by Unilever's Suave.

Usually the accompanying copy with one of her posts is a lewd or cheeky comment, or perhaps an emoji symbol. But this time it said: "Ad: My new don't-leave-home-without-it product? Moroccan Infusion Styling Oil from @SuaveBeauty! Check out ways to add brilliant shine to your style here: bit.ly/XDJOkp." The link was to a microsite by Suave that contains videos introducing users to their new products.

A Unilever representative confirmed that the deal was done as part of its partnership with Ms. Richie, not via Facebook or Instagram.

Unilever is the 25th-largest advertiser in the country, spending $1.3 billion on domestic advertising alone, according to the Ad Age Datacenter. But the Suave brand in 2011, the last full year of data, spent about $30 million, down significantly from about $45 million the year before. As it pulls back a bit on measured media, Instagram is currently presenting a way to interact with a lot of consumers in Suave's target demo for free.

Instances of celebrities incorporating the brands they represent into their Instagram photos are growing, but few are labeled as clearly as the Suave example.

For instance, LeBron James recently posted a picture to his 2.2 million followers of his feet in Nike sneakers, with the sales-y message "These are simply the best!! Ultra comfy and can wear them with anything. I'm ordering 100 pair right now. #kicks #Nike #family"

A recent post by Beyonce Knowles (3.2 million followers) shows the singer in a pop-art-style collage with a can of Pepsi, the soda brand for which she is now "brand ambassador." And Instagram's reigning queen, Kim Kardashian, used her feed to show her 7.6 million followers a picture of her own branded tanning lotion, and directing users to buy it at Ulta stores.

None of these promotional posts divulges in the text that the pictures are ads, which could run afoul of the Federal Trade Commission's guidelines. Those rules stipulate that social-media posts contain a disclosure if they're an actually an ad.

And then there's the matter of whether such posts will translate into sales for brands.

The post by Ms. Richie, the daughter of Lionel Richie and a staple on red carpets, accumulated nearly 26,000 likes as of this story, but the comments were mixed. Wrote one person: "Ads on instagram will ruin the app just like Facebook." Others expressed their distaste using thumbs-down emoji symbols. Then there were the ones who stated they were skeptical about someone with as money, such as Ms. Richie, using such a low-cost product. "U don't use Suave! Lol" said one, and another: "I don't believe you use suave haha, that shit is awful!" But several fans merely commented on how beautiful her hair looked and how pretty she is.