Kevin Hart LOL's All the Way to YouTube: Our Q&A 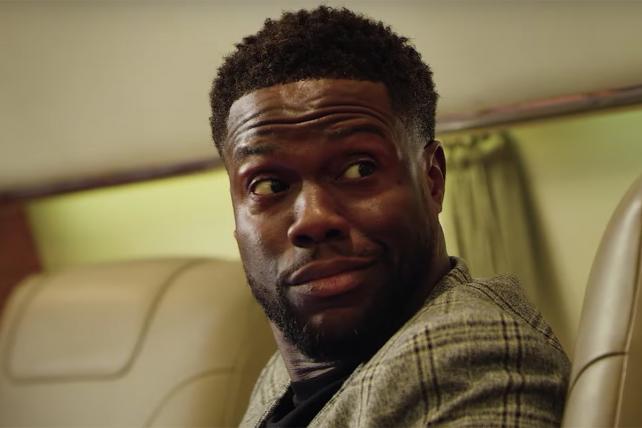 Kevin Hart is a man of many characters, and many careers.

Days after almost crashing the Super Bowl award ceremony in Minneapolis—he's an Eagles fan—and on his way to an undisclosed commitment with Nike, Hart took time to talk up his digital video network Laugh Out Loud.

"So far, so good," Hart says, talking about the roll out of LOL, in his signature fast-talking, declarative cadence. "There's no complaints. It's off to a great start. People are talking. People are loving it."

At barely a year old, Laugh Out Loud has a close relationship with YouTube, sponsors incuding Procter & Gamble and an app that claims more than 500,000 downloads.

It offers a platform for lesser-known comedians to get exposure, but it's also Hart's place to showcase his comedy. There are videos on YouTube where he drives a Lyft (a sponsor) in an old-man disguise, making riders very uncomfortable. He recently posted a video in which he plays five version of himself to promote an upcoming comedy tour. This week, he's introducing a series called "Cold as Balls," where he interviews sports figures. His co-host is the multitalented Terry Crews.

Here's what Hart had to say about his digital startup, his Super Bowl appearance and his hit movie "Jumanji." Our conversation has been edited.

You just said you are driving on your way to a Nike gig. What are you doing with Nike?

I can't give that information. Just know, I'm involved, it's always going to be something amazing, something legendary. We don't do it half way. We go above and beyond expectations, we aim to please. Something epic.

OK, we'll just have to wait to find out then. What about LOL? Tell us about it.

Yes sir: my comedy network, which is a multicultural platform, and we deliver comedy 24-7. It's something that became a priority of mine when I saw the opportunity to give others a platform. A chance to be seen, be heard. And I got Lionsgate to believe in my vision to the point they were willing to stand with me 50-50 as owners, with what I felt could be a game-changing move.

There's a video on YouTube, where you play like five different versions of yourself. It had more than a million views in less than a week.

That's me doing what I do best, finding unique ways to do a promo. I'm on tour right now, so I was announcing 150 tour dates that were added. And I felt like doing another video with "the Kevins" would do that. And it did. The reaction has been insane, people all around, loving how I'm constantly delivering the funny.

If this were 20 years ago you might be doing sitcom pilots, but now you're able to do YouTube and all these other digital projects. How has this all impacted the comedy business?

Look, with time comes change. So it's our duty to adapt and go with the change. This generation is very creative and very active, and the internet is giving people a platform to do things differently. So you don't want to be left behind. You have to stay with the times.

LOL was a unique way to stay with times. Ultimately, people get going through the internet. One time people were in love with scheduled programming, and now they watch it when they want to watch it. LOL has that on-demand feeling. People are searching the internet, looking for daily laughter, it's something that's of the norm. So giving them that place to go, a destination. LOL is that move for me.

Now that you are familiar with YouTube and what works there, how do you get a million views?

It's about producing a lot of content. Some things are going to hit harder than others. That's not a clear-cut reason to call it "good" or "not good." Some stuff just goes viral, and is a little bit more relatable. There's different levels of funny, and there's funny that can be universal, and that can appeal to somebody, and it goes viral. So when you have those pieces that can cultivate millions of views, it's a great thing. Some of them are going to perform less, but it means nothing. It's just about feeding that destination with as much content as possible."

On LOL, us having that continuous stream of video, us having a continuous scroll is what people love and respect more. That's why we're saying 24-7 content.

What happened at the Super Bowl? You tried to get on stage at the trophy presentation? What did you say to that security guard who stopped you?

You're looking at me having the best time of my life. I wanted to celebrate at the highest level. For the first time the city of Philadelphia brought a Super Bowl home. And that happening, I wanted to be a part of the moment as much as possible. So I went down to the field, and going down to the field, I kept trying to press my luck, and tried to go on stage when they were giving away the trophy. Stupidest thing I could have done, and doing it, I got a nice little hand in my chest telling me to stop. Then after the hand in my chest, that moment of reality of "I shouldn't be here," that was a conclusion that was quickly drawn, and I turned around and went about my business.

The city of Philadelphia is what I bleed. I was just having a great time being overwhelmed with the emotion of winning the first Super Bowl, all that played a major part. If had the chance to do it again I'd probably do it the exact same way.

Security guard playing better defense on Kevin Hart than either team did in the game: pic.twitter.com/Stj85U87co

Fair enough. OK, also you are in a huge movie, "Jumanji." How did that happen?

Listen, the huge success of "Jumanji" is unreal. It's in a ballpark of its own. It's something that was unexpected. On top of being unexpected, you're looking at a movie that literally appeals to anyone. When you produce something like that, you ride it as much as you can. You're looking at almost $900 million globally, so to say we saw this coming would be the biggest lie ever. To say that we're ecstatic about where it is would be the truth.

To say we're excited going into another "Jumanji" movie is even more true. We're just blown away by what we did and the opportunity now that we have a hit.

You co-star with Jack Black and The Rock, who both seem like sweethearts. Who's nicer?

Oh man, they are both amazing guys. I can't pick one. Those are two amazing guys. Exactly what you see is what you get. You're looking at two really stand up, professional guys.

Speaking of The Rock, he could run for president. What would your role be in a Rock administration?

Not a damn thing. That's him running. No, sir, not my cup of tea.

So, you'll stay out of politics, is what you're saying?

Last question. Should anyone read the comments section? Do you?

No way. When you look into that stuff, you're going in the wrong direction. At the end of day, we're in a world full of opinions. Some people are going to have them, some good, some bad, but you can't let that affect you or your talent. Ultimately, you are doing what you love to do and people are always going to have something to say about it. Whatever it is shouldn't stop you from pushing.