Line's Messaging App Was Blocked in China, but the Story Didn't End There | Ad Age
Skip to main content

Line's Messaging App Was Blocked in China, but the Story Didn't End There 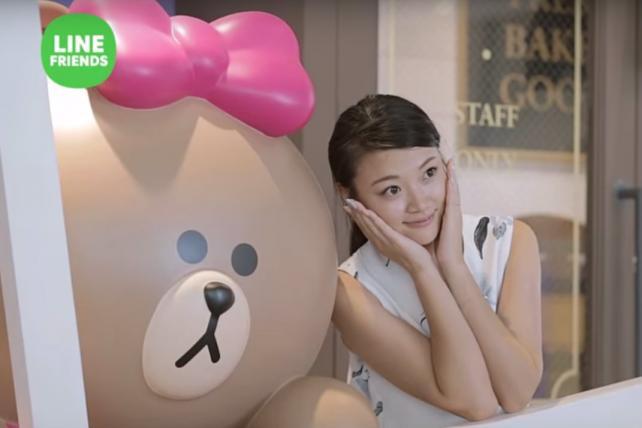 The Line messaging app was blocked in China a little over two years ago, a target of the government's Great Firewall, just like Facebook, Twitter, Instagram and YouTube. Here's what's unsual about Line: Its brand has only gotten hotter in China since then.

The bunny, bear, frog and duck characters that started out as messaging stickers on Line's app have turned into a lucrative merchandising and licensing opportunity in Asia, including in China. They're cute like Hello Kitty, but fresher and edgier.

In China, McDonald's put Line characters on toys for an Olympics promotion. Pizza Hut had a Line promotion too. Line's characters have adorned T-shirts at China's Uniqlo stores and on notebooks from Moleskine. Line has five shops selling its own merchandise in China, plus two pop-ups, and plans for more.

A Line exhibit at a Shanghai mall drew crowds; it cost $4.50 and up to take selfies in a giant dollhouse inhabited by Line's characters. College students posed next to plastic statues of a piano-playing cat and a yellow duck taking a bubble bath. Some weekends, staff at Joy City mall say, people waited up to two hours just to enter the gift shop. (Watch the promo video for the exhibit, which ended Sunday.)

Tokyo-based Line Corp., which is owned by South Korean web portal company Naver Corp., had the biggest tech initial public offering of the year in July. It has tough competition globally with other messaging apps, from WhatsApp to WeChat, which is ubiquitous in China. Line has 220 million monhtly active users, compared to 806 million for WeChat.

Line has some quirky revenue streams beyond advertising, which has been growing. Stickers generated $268 million for the company last year, and there are now 23 permanent stores in Asia selling merchandise around Line characters, not counting pop-up stores globally. Line characters have names and very basic character traits and backstories. (A bear called Brown has an inter-species romance going on with Cony, a bunny.)

Last year, Line Corp. launched a wholly-owned South Korea-based subsidiary called Line Friends to promote the characters. That was Line seizing an opportunity it didn't originally foresee; when the characters debuted as messaging stickers in 2011, the company didn't know they would translate so well into merchandise, according to the communications team at Line Friends.

Today, consumers in China don't associate the Line characters with the Line app – the IP stands on its own, said Alexis Bonhomme, general manager and co-founder of CuriosityChina, a company focused on social customer relationship management and Chinese digital platforms.

"They're cute, playful, colorful characters, very suited to the Chinese market and the Asian market in general," he said.

Eric Cruz, executive creative director at AKQA Shanghai, noted that the Line characters appeared in "My Love From the Star," a Korean drama about an alien in love with a human actress. In 2014, that show was a megahit in China, where K-pop reigns. "My feeling is that Line is trying to win China through a 'K-pop culture' culture invasion, building their brand that way," Mr. Cruz wrote in an email.

That strategy may have worked; some people taking selfies at the mall exhibit identified the characters with Korea's brand of cool. Others had no clue where the characters came from, but they all took a lot of selfies.

Wang Mei Ying, a 58-year-old retiree dressed up for lunch out with a girlfriend, posed with a giant white rabbit. Jiang Yi Ling, 26, said she knew of Line but had never used it. She brought along her mom and two-year-old; the toddler sobbed as she tried to pose him next to a big plastic duck in a bathtub. ("He hates baths, he doesn't want the duck to take a bath.") She had better luck with a piano-playing cat.