Why Marketers Are Betting on Bots

Since she began working for the Cosmopolitan of Las Vegas hotel in January, Rose has received dozens of marriage proposals. And so much for "What happens in Vegas, stays in Vegas": Some guests who found her help indispensable when it came to free drinks or planning outrageous evenings continued to text her long after they split town. There's only one difference that separates Rose from the hotel's 5,000 other staffers: She isn't human.

The Cosmopolitan launched Rose, a chatbot, with its core agency R/GA last winter to better interact with customers in a fun and playful way. Accessible via text, Rose functions as both a concierge and a housekeeping aide in guest services. But her missives are anything but robotic. One guest recently called her a "sultry siren"—-she often uses the kiss emoji. When once asked about free champagne, she replied, "Do I look like a sugar daddy?" The hotel purposefully branded Rose to engage in a cheeky way in keeping with its slogan, "Just the right amount of wrong."

"She has a distinct personality that entertains guests and is a reflection of the Cosmopolitan brand," said Mamie Peers, VP-digital marketing of the 3,005-room hotel. "[Rose] is delivering on the promise of helping guests have a better time and we're looking at ways to expand her in more ways throughout the resort."

Formerly just a plot mechanism in science-fiction stories, artificial intelligence is finding its way into contemporary commerce as a growing number of marketers turn to bots to better connect with customers and, in some cases, offer something digitally distinctive. Brands including eBay, Taco Bell and 1-800- Flowers are early adopters of the automated systems, which can also collect consumer data for more personalized marketing, helping to take the strain off customer-facing employees. Even older legacy players including Macy's are experimenting with the feature, which holds the promise of better engagement and, of course, added sales. Macy's said at a recent investor conference that it's piloting a customer-service chatbot. Though there are some kinks, and some time before technology allows bots to handle more complex interactions, early adopters say the pilots have been successful for test-and-learn strategies.

"There's really been an explosion of chatbots," said Matt Marcus, VP-executive creative director at R/GA. "The chat platform is an exciting opportunity for brands—they can deliver deep functionality and, if they do it well, they can deliver it in a highly branded way." 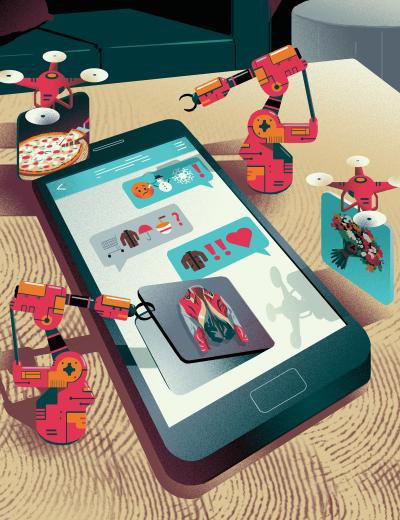 For now, chatbots largely appeal to tech-savvy consumers already using Facebook's Messenger, Kik or other platforms to chat with friends. The audience is expected to grow as those types of communication tools catch on. And as companies become more attuned to what their bots can do, they'll promote them more widely—a lot of initiatives are still in beta. For now, ordering Taco Bell via Slack, for example, is only open to a select group of companies.

There's wider adoption on other platforms. After introducing its Messenger bot platform in the spring of 2016 with 33,000 bots, Facebook now has some 100,000 active bots using the service to talk to customers.

To continue its momentum, Facebook recently unveiled a series of upgrades, including a Discover tab where users can easily access their most recently used bots.

"We see a lot of innovation happening," said Martin Barthel, head of global retail and ecommerce strategy at Facebook, noting that some brands are still in the testing phase but activations are "ramping up significantly."

In addition to Messenger, brands are running bots on platforms such as Kik and Telegram. Some, like Rose, simply run on SMS text. A host of startups are looking to cash in on the trend, according to CB Insights, a venture capital database. Those companies, like Claire, which uses a chatbot to help brands with apparel trend forecasting, are receiving substantial VC investment. Claire raised $1.7 million earlier this year, for example.

Research from Forrester showed 5% of companies worldwide said they were using chatbots regularly in 2016; 20% were piloting them; and 32% were planning to use or test them in 2017. Success rates are mixed as some companies struggle to define a bot's purpose, set goals that are too ambitious for the technology that's available, or launch them before they're ready.

"The development of artificial intelligence will make the chatbots more advanced and truly smart," said Forrester Senior Analyst Xiaofeng Wang, who's based in Singapore. "However, AI is still [in] its childhood. Companies need to understand the limitation of chatbots today and leverage the existing capabilities to deliver customer and business value."

She points to success stories, such as OCBC Bank's Emma, a chatbot focused on finding home loan leads that helped the Singapore bank close millions of dollars in new loans. "To companies, the point is whether technology can help deliver business value, not chasing the new technology all the time," said Wang.

No seamless fix
Today's chatbots can quickly dispense Q&A type of answers, such as the nearest location of a store or the price of an item online. Wang predicts it could be five years or longer before chatbots will be able to handle complex and lengthy interactions, like consulting on products such as life insurance.

In these early days, bots aren't always a seamless fix for marketers. Everlane, the trendy ecommerce brand known for its sustainable supply chain sourcing, introduced a bot on Messenger two years ago, but in March told consumers it had "decided to stick with what we do best—email." The San Francisco-based brand, which declined to comment further, offers email support to customers with a four-hour response time. However, its bot still appears accessible via Messenger. When Ad Age reached out, we received a response within a few hours, but the communication trailed off on the brand side after a few minutes. Such inconsistency could damage customer relationships.

And let's not forget the cautionary tale of Microsoft's recent bot exploits. The company was forced to kill off chatbot Tay when it learned racist speech last year through interactions with internet trolls. The company recently returned an ostensibly new and impervious version, Zo. The English-speaking bot, however, has already called the Qur'an "very violent," according to numerous reports. Of course, Microsoft's chatbots, as machine-learning experiments in AI, are a different breed than the preprogrammed bots brands are using. Still, marketers are eager to see whether machine learning and other technology can help their bots sound less like bots and more like the people with whom they're connecting.

In many cases, particularly with Q&A scenarios, experts said chatbots can substitute for chats with human representatives when customers expect real-time interactions. But that does not mean human interactions will completely disappear. "It's just like digital media/online marketing took over some share of print media/traditional media, but they still coexist," said Forrester's Wang. "Chatbots will coexist with emails and human chatting."

As companies devote more resources to the effort and AI technology improves, the belief is that interactions with chatbots will seem more like conversations with actual people, leading to better engagement.

Some brands have found that bots, if implemented correctly, can replace more costly initiatives like apps. Unlike with apps, companies don't have to convince customers to download something extra—traditionally a huge hurdle for retailers—because bots run on platforms that people already use, like Facebook. In addition, bot development costs significantly less—roughly a third of the $300,000 to $1 million it costs to build an app, according to R/GA's Marcus. Maintenance costs are also lower, he said, and consumers don't need to update bots as they would an app with each IOS or Android software upgrade.

Flirty fun
"There's almost innumerable opportunities for bots to engage with consumers," Marcus said. "They're the website of the '90s, meaning every brand is going to need one. ... Everyone is going to have some natural language entity so [consumers] can engage with branded intelligence to get details about the content or services a brand wants to offer."

Rose isn't the only chatbot having some flirty fun. In China, Microsoft's chatbot Xiaoice acts like a teenager and reportedly has tens of millions of users. When asked questions like, "How many people do you talk to a day?" she'll reply, "Only you." And more than 100,000 merchants are using Alibaba's AI-enabled "store concierge" chatbot in China to field millions of customer questions for their own virtual stores.

For eBay, which introduced its ShopBot on Messenger last October, the initiative provides additional customer data to better equip future marketing, which can be more personalized than ever. For example, if someone asks the bot about a new jacket in a certain size, the next conversation will begin by the bot showing items in that same size. The company is working on brand affinity as well, in which the bot will show brands similar to those a customer has previously explored, according to RJ Pittman, senior VP-chief product officer at San Jose, Calif.-based eBay. He noted that though the bot is still in its beta stage, it's already seeing high double-digit growth every month. Customers can also upload pictures on their phones of items they're searching—an added bonus for anyone who's ever secretly snapped a picture of a stranger's bag in the hopes of buying one similar.

"This is one of the easiest ways to onboard new-to-eBay customers," said Pittman. "If you're already on Facebook Messenger, you can come over and shop in our catalog and buy things—it's the least amount of friction."

For most brands, some consumers have been game. The Cosmopolitan's Rose has proven a valuable tool at driving customer engagement with the brand, Peers said. Nearly 15% of guests have opted into texting the bot. Of those who do, around 70% have contacted her at least three times.

1-800-Flowers, which rolled out a Messenger bot in April of 2016 and an artificial-intelligence gift concierge powered by IBM Watson a month later, finds the new initiatives make the gift brand more accessible to consumers in various channels.

"Allowing customers to engage with us on their terms, in the channels of their choosing, helps brands stay competitive and deliver a more personalized experience," said Amit Shah, chief marketing officer. He said the company has seen growing adoption with its customers. The gift concierge—known as GWYN for Gifts When You Need—has seen customers interact on average for more than two minutes; 80% of consumers say they will use the service again.

Pizza bots
Restaurant companies including Domino's for now are using a basic approach, with functions that let people place orders within Messenger and other platforms.

When Dennis Maloney, Domino's chief digital officer, started hearing about the potential of bots nearly three years ago, the company already offered multiple tech-savvy ordering options, from mobile phone apps to Dom, its own virtual-voice ordering assistant. Domino's opted to add bots to the list as well, and began taking orders through Messenger in September. It declined to say how many diners have used its chatbot, which asks for details such as location and presents images of menu items to help with orders.

Maloney said that when it comes to chatbots, technology has a way to go before they will truly catch on.

"We really look at the bot stuff now as, honestly, it's very, very early, early, early adopters of the technology who are just trying to play around with what's possible from a consumer experience standpoint," Maloney said. "We're still even limited by some basic functionality that would be really important for us, from an ordering experience, [that] still isn't even possible within bots."