Here's How Mobile News App Circa Plans to Make Money

It's time for the mobile news-reader apps to become businesses.

One of the category's earliest players, Circa plans to introduce ads into the news-summarizing app later this year to mark the company's first revenue stream, according to CEO Matt Galligan. The two-year-old smartphone app also plans to roll out new ways to distribute content in order to grow its audience and fend off a fresh onslaught of mobile-news competitors. 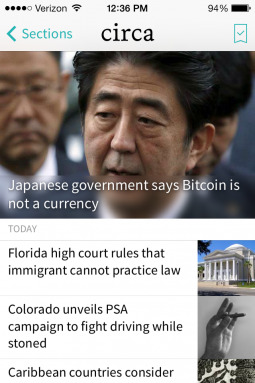 Since Circa launched in January 2012, a handful of mobile apps have arisen looking to serve up news bites for on-the-go consumption. This year alone Yahoo introduced its New Digest app, and Internet entrepreneur Jason Calacanis has rolled out Inside.com, which condenses stories to 300-character morsels.

Then there are the mobile news aggregators like Flipboard and Facebook's Paper that aim to become the mobile version of a newspaper's front page. But aside from Flipboard -- which acquired rival Zite from CNN last week -- none yet generate any revenue or have courted advertisers.

Circa is developing two types of ads: magazine-style full-screen banners, like Flipboard, and sponsored posts like you might find on BuzzFeed, The New York Times, The Atlantic and seemingly everyone else. As with those, sponsored posts, which look and feel like editorial, would be created by a separate staff.

"Once we find a flagship [advertiser], then we'll go out there with it," Mr. Galligan said, noting that the technology to power the ads "is pretty much in place."

Tablet, desktop versions
This year Circa will roll out an iPad app and a full-fledged desktop site that will primarily mirror the smartphone app. People can already check out Circa stories on their desktop web browser by clicking links that Circa tweets out, but they cannot access the full content feed.

Circa isn't only looking at ways to expand distribution on owned-and-operated properties. Mr. Galligan and team have spent the past six months working ways to make stories embeddable on others' sites, like tweets or YouTube videos. "I think an entire story could be embedded," he said.

The first question any advertiser is giong to as is: how many users? On that, Mr. Galligan isn't talking (at least to us), though he said monthly users had doubled in the last three months. One man has taken advantage of the app's ability to "follow," or receive notifications when a story is updated, to keep track of 2,000 stories concurrently, Mr. Galligan said.

Data licensing
While ads will be Circa's first revenue stream, it won't be the only one. One future revenue possibility would be licensing access to Circa's article data to other publishers, Mr. Galligan said.

For example, a publisher could see which stories are the most followed on Circa as an indication of what topics that publisher's reporters should focus on. "Follow is probably one of the first metrics that indicates interest around a story...A [Facebook] like doesn't express intent. The shit you read doesn't even express intent anymore," he said.

It will take time for the revenue streams to grow to the point of sustaining the business. In the meantime, Mr. Galligan plans to raise another funding round this year.

Circa has raised $3.4 million to date from investors to support its 11 editorial employees and 6 product employees, and Mr. Galligan plans to nearly double his company's headcount by the end of the year.