Patch is using AI to write 3,000 articles a week 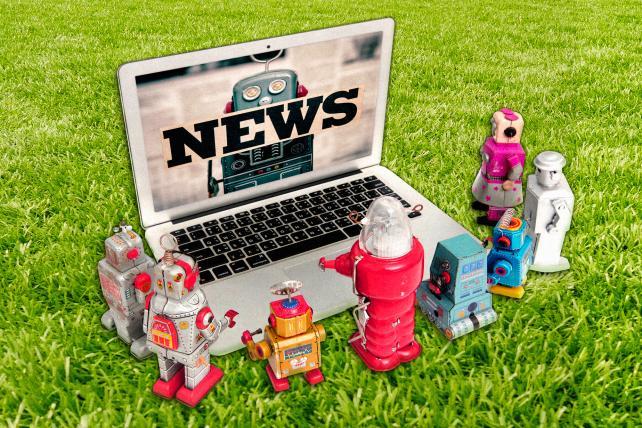 All your news are belong to us
Credit: Illustration by Ad Age

No robots were deployed in the writing of this article. But the next time you check the weather in your neighborhood, you might read a report filed by a machine.

Patch, which operates local news sites in 1,277 communities across the U.S., is using artificial intelligence to gin up routine news and data-driven stories in an effort to relieve reporters of repetitive, low-level work.

Starting in December 2018, the Hale Global-owned publisher began incorporating artificial intelligence into its workflow and content management system to quickly craft and scale articles that don't need outside analysis or news hooks. It is now publishing 3,000 pieces of content a week with the technology.

"One of the things we are constantly searching for are efficiencies," says Warren St. John, CEO of Patch. "We have a lot to cover and it's a perpetual challenge for us. We're running on our own steam, so anything we can do to free up our reporters from any busy work, we try to do."

The publisher is starting small with the tech, first automating data-focused reports like weather forecasts, real estate sales and soon local events. The AI tool pulls in data across different regions, such as temperatures in different cities and plug it in to a pre-existing template, ready to be published.

Patch is creating the templates in-house and handling the engineering behind it. The publisher is then working with a third-party AI vendor to produce the text that automatically builds in each template thanks to the magic of AI.

According to St. John, the tool benefits the company in several ways: Patch can create stories tailored for each of their community websites at once, rather than crafting one at a time. A weather forecast for Greenwich, Connecticut, for example, can be automated at the same time as a weather forecast for Mills Valley, California. In all, forecasts for each of its 1,277 communities can take a few minutes to piece together, St. John says, and editors can then choose exactly when to publish them.

"It allows us to create something that is scalable," he says. Patch joins publishers like Forbes, The Washington Post, Reuters and the Associated Press in using AI to increase and streamline editorial output.

The tool also frees up Patch's 110 reporters to concentrate on hyperlocal and original stories which end up drawing larger audiences which, in turn, benefits the company.

After spinning off of AOL five years ago, Patch doesn't have the safety net of VC funding. Still, the company is profitable, and brought in around $20 million in revenue in 2018. Hyperlocal news sites have mostly struggled thanks to platforms like Craigslist, Facebook and Google, and Facebook's algorithm changes have not helped. Having AOL concentrate on growing out its email list has helped the publisher stay afloat, says St.John, who adds that email accounts for a third of Patch visits online.

Currently, Patch sees between 23 and 25 million unique visitors a month online and hit 100,000 monthly active users for its app at the end of 2018, according to St. John. User engagement is strongest in its app where users visit five times more often and stay three times as long.

St. John is fully aware of the potential for employee backlash against automation, but says AI cannot replace real journalism. So far, he says, Patch reporters are relieved, not complaining. "When critical news is happening in their area, they don't have to pause to do weather," he said. "No one ever went to journalism school to write a weather forecast."

St. John would not reveal how much Patch has invested in its AI tool, but that it was a "significant investment" on the frontend with engineering and product template costs. "It's one of those things, where the more you put into it, the more you're get out of it," he said. "The potential complexity is infinite and right now we are at the dawn of that age."