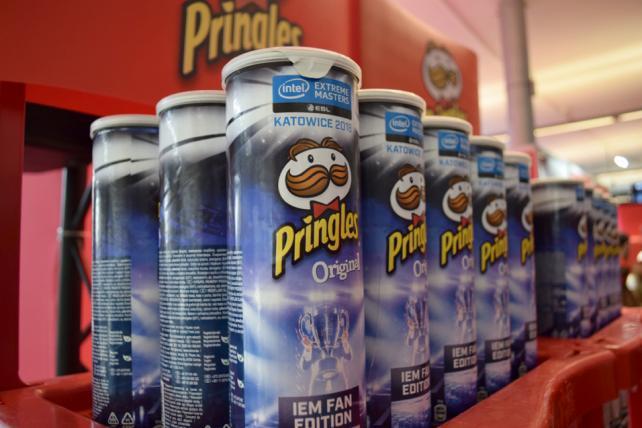 Pringles wants to be the chip of choice for esports players.

The Kellogg brand has nearly doubled its investment when it comes to sponsorships in the online competitive gaming space.

Pringles first began a partnership with ESL, formerly Electronic Sports League and widely known as the world's largest esports company, in October 2017 by sponsoring a single event--ESL's One Hamburg in Germany. The next year saw the brand sponsor two events, one in Germany and one in Poland. Now, in 2019, Pringles will sponsor seven ESL esports tournaments across 13 European countries from Sweden to Romania, according to Toan Nguyen, executive strategy director for Jung von Matt, the Hamburg-based marketing agency Pringles is working with for all esports-related work.

The sponsorships will include digital ads and logo placement, as well as booths at some of the live tournaments where attendees can get free Pringles. Nguyen said Jung von Matt is currently in the process of creating digital video content specifically for the online tournaments to appear during commercial breaks on esports streaming platforms such as Twitch. "I always say 'Forget Instagram, go on Twitch,'" Nguyen said.

Nguyen said Pringles is drawn to esports audiences and players because they skew young, have global mindsets and are well-educated and fun. To resonate with these audiences and not seem overbearing, Pringles is in the process of testing what kind of content works best.

"Throughout all our activations is the goal to be perceived as a natural part of the community," said Nguyen. "We want to be seen as an endemic brand." Even simple strategies, like placing players' names on Pringles cans--which the brand did for one of its first activations--can make a difference to the cohort, said Nguyen.

"Esports players were seen as weird geeks sitting in the basement, living with their moms. They never really got recognition. We gave them recognition," he said. "They kept sharing the cans on social media. We got crazy earned media through that action."

Getting ready for ESL One Hamburg.

Although Nguyen would not share exact figures, he said that Pringles' investment in 2019 is 80 percent more than what the brand spent in 2018. According to ad buyers, the cost of sponsoring an esports event is still on the cheaper side when compared to other sports, starting at $50,000 and running as high as $250,000, depending on the popularity of the event. Sponsoring a team, meanwhile can cost as much as $500,000.

Nguyen said Pringles is currently evaluating what esports teams might be worth sponsoring. It is, however, a riskier investment.

"Everything is developing so quickly that, if you look at teams, they're fragile at the moment because the talent keeps moving," he said. "If you have a bad season, everyone goes away. It's a little bit risky for an esports sponsor to sponsor a team for three years if you don't know who is going to be playing."

Pringles is not alone in wanting in on esports. Global brand investment in the space, whether through sponsorships, ads or media rights is estimated to top $897 million in 2019, three times as much as it was in 2015, according to data from gaming analytics firm Newzoo, first published by Reuters in February.

The U.S. has been behind in adoption, but audiences--and the brands trying to reach them--are starting to want in. In a report published last week, eMarketer projected that digital ad revenue for esports in the U.S. will jump by 25 percent to $178.1 million this year and will reach $213 million by 2020. Nguyen said to expect the U.S. to be on Pringles' radar in the years ahead.