After Chris Brown Ad, Rihanna Says Snapchat Is Not Her Fav App 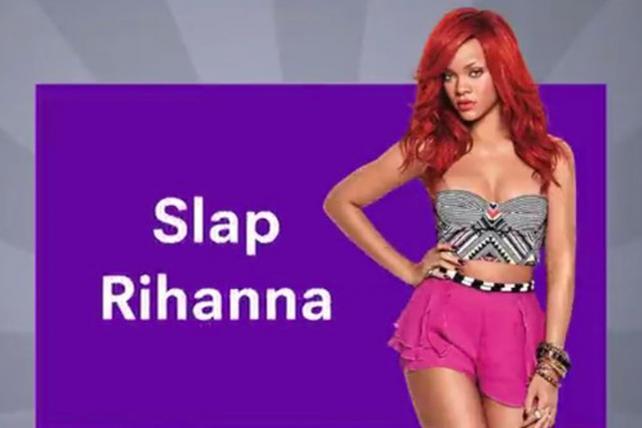 This ad by the app Would You Rather appeared on Snapchat.
Credit: Royce Mann via @TheRoyceMann/Twitter

Rihanna says she already was no fan of Snapchat, even before an ad on the app seemed to make a joke about her abuse by Chris Brown.

And she used Instagram to make her feelings known.

The star on Thursday made the statement about the ad, which appeared on Snapchat this week and was quickly criticized for making light of domestic violence. The ad was for a game app called Would You Rather, developed by Fierce Capital, and it asked "would you rather slap Rihanna or punch Chris Brown."

"Now Snapchat I know you already know you ain't my fav app out there!" Rihanna wrote:

But I'm just trying to figure out what the point was with this mess! I'd love to call it ignorance, but I know you ain't that dumb! You spent money to animate something that would intentionally bring shame to DV victims and made a joke of it!!! This isn't about my personal feelings, cause I don't have much of them...but all the women, children and men that have been victims of DV in the past and especially the ones who haven't made it out yet...you let us down! Shame on you. Throw the whole app-oligy away.

Snapchat said earlier this week that it removed the ad because it violated its policies. To be clear, the ad was not created by Snapchat, even though the singer accused the company of animating it.

"This advertisement is disgusting and never should have appeared on our service," a Snapchat spoeksman said in an e-mail statement. "We are so sorry we made the terrible mistake of allowing it through our review process. We are investigating how that happened so that we can make sure it never happens again."

Chelsea Clinton commented on the ad, saying in a tweet that it was "just awful."

Snapchat had been enduring some turbulence with disgruntled social media stars even before this. Kylie Jenner, one of Snapchat's most popular users, became one of the leading voices against its recent redesign after the app launched a whole new interface this year.

The changes separated personal messages from videos from publishers, brands and web celebrities. A number of users have said they have seen declines in their audience on the app since the change, and celebrities like Jenner voiced their disappointment with the new look.

sooo does anyone else not open Snapchat anymore? Or is it just me... ugh this is so sad.

In February, Jenner tweeted: "So does anyone else not open Snapchat anymore? Or is it just me. Ugh this is so sad."

Jenner has since been more visible on Snapchat, however, posting pictures of her baby.

Rihanna did not elaborate on why Snapchat was not her "fav" app, but the fact that she made her statement on Instagram was a dig in itself. Snapchat is in heated competition with Instagram, which is owned by Facebook.

Instagram has been known to adopt features developed by Snapchat, such as 24-hour video stories. Every Snapchat miscue could give Instagram a fresh advantage.

Both platforms faced a crisis over the weekend, however, when their GIF partner Giphy shared a racist animation to their apps. Instagram and Snapchat user were able to view a racist GIF and include it with their selfies.

The apps have since disabled Giphy integration, at least until it can prevent such GIFs from appearing in the future.

The ad maker Fierce Capital was not immediately available for comment.