The next big thing in consumer tech isn't a smartphone, but a smartwatch. Or at least that's the growing hope as growth in smartphones cools.

Samsung on Wednesday used its second high-profile event this year to pitch the Galaxy Note III, the latest iteration of large-screened smartphone, and Galaxy Gear, its foray into selling a "smartwatch."

Gear, which will run on Android software, lets users to track their health data, get social media notifications and take photos via a 1.9-megapixel camera. The device will also be able to run apps including Evernote, Path and Pocket.

"As smartphone growth slows, Samsung (and other consumer electronics makers) seek new sources of growth," Forrester analyst Sara Rotman Epps wrote in an email. "We see the body as the next frontier for personal computing and the wrist is one of the most accepted places on the body for consumers to wear a sensor device."

To date, the most recognizable name in the nascent smartwatch market has been Pebble, a company that's sold nearly 200,000 units despite spending just $6,000 on marketing. Approximately half of those units were sold last summer during Pebble's record-setting Kickstarter campaign. While that may seem like a one-time viral success story, the smartwatch -- and wearable computing, in general -- is expected to become a major marketing category over the next several years.

Five of Ad Age Datacenter's top 100 advertisers in 2012 -- Apple, Google, Nike, Samsung and Sony -- are currently selling or developing a "wearable" product, as is emerging marketing force Qualcomm. Piper Jaffray projects the market for wearables to increase to $18 billion in 2016 from $1 billion in 2012.

Piper Jaffray analyst Douglas Clinton has gone so far to say that wearables could possibly replace smartphones in terms of prominence -- and, in turn, marketing spend. "Obviously mobile is a trend that's undeniable at this point and if you think about what's the next smartphone in the next 5 or 10 years, it's likely something that's a wearable technology," Mr. Clinton told Ad Age in a recent interview. "They're going to replace things like the smartphone because they're easier [to use] and more integrated with your body."

Samsung's announcement comes a week before Apple is set to make a product announcement of its own on Sept. 10. While the event is set to see Apple will release iTunes Radio, its heavily-anticipated streaming music service, there's rampant speculation that Apple will also release a smartwatch. 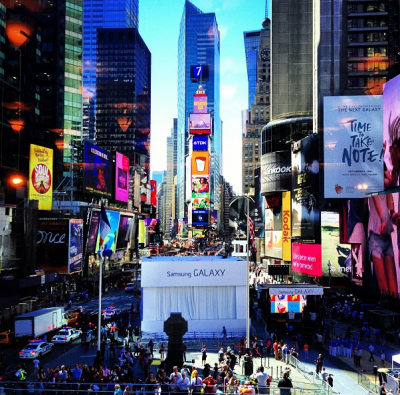 "There are lots of gadgets in the space right now, but there's nothing great out there," Apple CEO Tim Cook said at AllThingsD's D11 conference this summer. "It's ripe for exploration. I think there will be tons of companies playing in this space."

And that competition will be fueled by a corresponding number of advertising dollars.

In the maturing smartphone market, Samsung's success has been a direct result of its willingness to flood the market with a variety of devices at different price points, updating them often and marketing them aggressively. Samsung spent $880.7 million on U.S. advertising in 2012, enough to make it No. 46 on Ad Age's list of top 100 marketers.

But 2013 has shown that the increasingly crowded high-end smartphone market is nearing saturation. BlackBerry, HTC, LG, Motorola and Samsung have all released heavily-marketed flagship smartphones this year. HTC's One and Samsung's Galaxy S4 have struggled to sell despite rave product reviews. BlackBerry, meanwhile, is up for sale after its failed rebrand earlier this year.

Samsung's Galaxy Note III is larger than most smartphones -- its predecessor was the original "phablet," a device that's between a smartphone and a tablet -- but its unclear whether size is compelling enough to reverse waning interest in smartphones.

"A specific device like the Note III is not a mainstream device like the Galaxy S4, but may very well suit a segment of users who see the benefit of a larger screen," Forrester analyst Charles Golvin said.