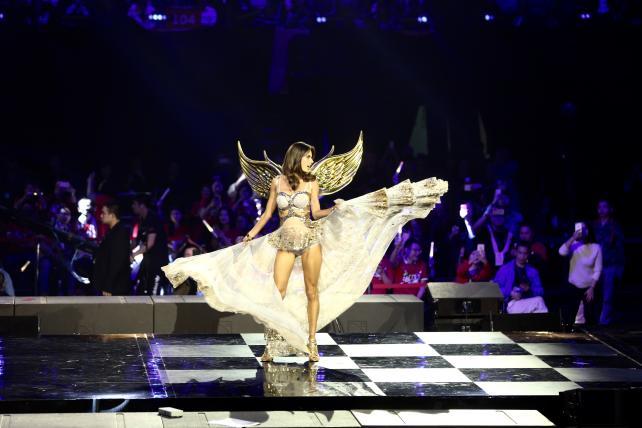 Alibaba's annual online shopping festival started out eight years ago in China with just 27 merchants taking part. Called Singles Day or Double 11, it has grown into the world's biggest shopping day, and has just smashed its own record, with sellers on its platforms logging nearly $17.8 billion in transactions in 24 hours. Over 11,000 foreign brands joined in, including first-timers Apple, Sephora, Target, Victoria's Secret and Maserati.

The Chinese internet giant has created a whole entertainment offering around its shopfest, including a 4-hour livestreamed variety show that drew stars like Scarlett Johansson, Kobe Bryant and David and Victoria Beckham. That's a surprising departure from its small-scale start in 2009, when Alibaba latched on to the fact that some Chinese college students were celebrating Nov. 11 as a day for singles, an anti-Valentine's day. Other e-commerce companies have joined in, including Alibaba's chief rival JD.com, and much of China shops on Nov. 11. It's not just for singles anymore.

Here's a few things to know:

It's undeniably huge, though there are a few questions about Alibaba's numbers.

The number released at the end of the night is Alibaba's gross merchandise volume – the total amount settled through the company's affiliated payment service, Alipay. Alibaba doesn't actually sell the merchandise on its platforms, it connects consumers with brands and retailers and takes a commission from that.

The number is closely watched as a sign of the health of consumer spending in China; this year's final number was up 32% from last year, in local Chinese currency. Some analysts have questioned how much of the merchandise sold on Double 11 gets returned, and how many merchants buy up their own products to boost sales and thus their rankings. The U.S. Securities and Exchange Commission also has been looking into the way Alibaba accounted for Double 11 transactions last year. Michael Evans, Alibaba Group's president, declined to comment about the inquiry, though he said the company was working with the SEC. He added that Double 11 metrics would be audited by PwC.

The top-selling foreign brand was Nike.

The three best-selling merchants on business-to-consumer platform Tmall were locals: appliance shop Suning, consumer tech brand Xiaomi and Honor, a subbrand of smartphones from Huawei. A four-year-old Chinese snacks brand called Three Squirrels was the No. 7 seller, beating out all other food brands. (Read more about Three Squirrels here.)

Foreign brands made up about 27% of gross merchandise value. Michael Zakkour, who helps brands enter China in his role as vice president of the China and Asia Pacific practice at consulting firm Tompkins International, said the strong figure was a sign of how some non-Chinese brands "have really committed to Double 11 … The ones who have been doing it for a while really understand the ecosystem," he said, mentioning Nike as an example.

In China, gamification is big.

Alibaba promotes its Double 11 event as the future of retail. About 82% of sales were made on mobile devices, and there were quirky interactive aspects to the variety show.

A performer came out wearing a yellow winter coat; people could use their phones to virtually "grab" the coat and buy it. People who watched on mobile phones saw ads floating across the screen and could click on them to buy the products advertised. College student Zhou Sijia, 22, played mobile games before the event to get coupons and credits; she eventually spent about $440 to stock up on pet food, tissues, storage boxes and clothes.

Alibaba also has invested in virtual reality shopping, with a program called Buy+. Macy's and Target both have virtual reality stores on Alibaba's Tmall platform; people who put their smartphones in VR viewers had the sensation of walking through them and picking out products to buy. (Watch a video on that here). The experience also included a VR spin through New York's Times Square in a classic red convertible. In a separate experience, Alibaba developed a Pokemon Go-like augmented reality game to draw people into offline locations like Starbucks, which created special merchandise and a Cocoa Java Mocha to be sold only on Nov. 11.

Alibaba gave ad revenues from the variety show back to shoppers.

Alibaba takes commissions from sales, but it's also a major publisher akin to Google because its platforms take in so much advertising revenue. Alibaba is forecast to take in more than a quarter of the digital ad spending in China this year, or about $12.05 billion, according to eMarketer. Alibaba has media inventory on its shopping platforms, but also on video sites like Youku, which broadcast the show.

Putting more emphasis on entertainment makes the shopping event more festive and social -- and it also draws in ad revenue. Alibaba said it took the ad revenue from the variety show gala and gave it back to shoppers in the form of "red envelopes" -- virtual cash handouts distributed on their mobile devices, which could be used to shop.

There's a lot of experimentation, and brands need to figure out what works.

Leading up to the sale there has been a blitz of marketing events, such as an 8-hour livestreamed fashion show with 80 brands. People could instantly pre-order the products they saw on the runway. And while it was an intriguing experiment, it wasn't necessarily successful for all brands: A report from WPP's Mindshare and Kuvera said there were 1.2 million viewers, but many brands logged zero or single-digit sales during the show.

"Brands must always remember, for Alibaba, the most important benefit of all is traffic," the report said. "As long as consumers stop by on the platform, it's a win for Alibaba. Participant brands may find differently."