Tencent makes much more money from games than from ads, and it commands a smaller share of the global ad market than Chinese search giant Baidu or e-commerce behemoth Alibaba. But its strong mobile focus is boosting its appeal to advertisers.

The company, which has invested in streaming rights for NBA games, from Sony Music Entertainment and from HBO, said ad growth was driven partly by its video services.

Strong ad performance also came from platforms including QQ and WeChat, the ubiquitous app that blends functions of WhatsApp, Facebook, Skype and Instagram, and also offers e-commerce and other functions. Called Weixin in Chinese, it had 549 million monthly active users at the end of the quarter, up nearly 10% from the previous quarter. Tencent doesn't break down the geography on where users are, but most are assumed to be in China.

Tencent Holdings Ltd. has proceeded cautiously with advertising on WeChat, preferring to build a strong user base first. So it generated a lot of industry excitement in January by testing a new type of ad to show up on people's "Moments" feed, where people share photos, links and articles, similar to Facebook's news feed. For the test it worked with a dozen companies including BMW and Coca-Cola. Tencent didn't give specifics on how much money those ads brought in. 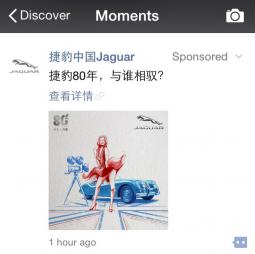 But "we're very happy, and more importantly, the advertisers are very happy with the results," said James Mitchell, Tencent's chief strategy officer, citing engagement metrics and viral shares. "Given the advertiser happiness, we're going to be progressively expanding the number of advisers and advertising formats as we move through the year."

Tencent reported profits of $1.1 billion, up 7% from the first quarter of 2014. The company had the ninth-biggest share of the global ad market in 2014, with a 0.83% share, just under Twitter and ahead of AOL, Amazon and LinkedIn, according to eMarketer.