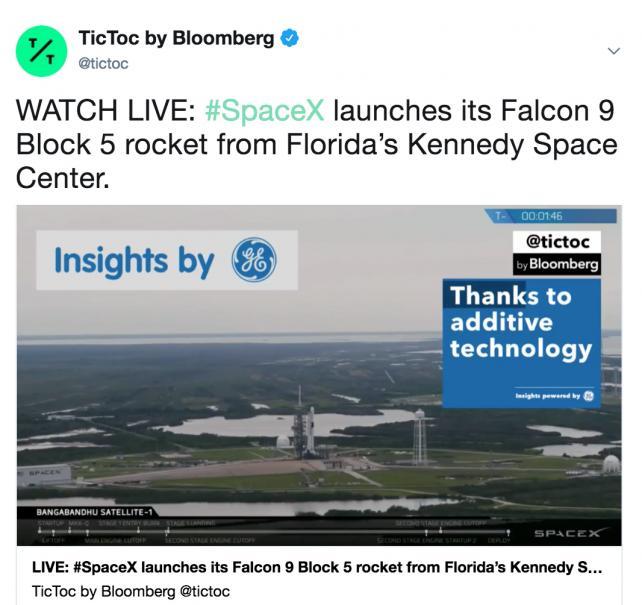 There's a lot of downtime during a rocket launch, Bloomberg says, calling that an opportunity for brands.
Credit: TicToc

The new ad unit is scheduled to debut later today during the SpaceX Falcon 9 launch from the NASA Kennedy Space Center in Florida. General Electric was the first buyer for the new format.

The ad "will display at a time where our viewers are highly engaged and focused on the live stream," says M. Scott Havens, global head of digital at Bloomberg Media. "To me, this is future of video advertising—not interruptive, not ignored, not pre-shot, not incongruent. It's useful, additive, contextual and in real-time."

Havens says TicToc saw 1.4 million average daily views during the month of April, shy of the 2 million it previously said it hoped to achieve by now. Overall, TicToc has accumulated more than 160 million total views since it began in late December 2017.

The new format came about after capturing feedback from TicToc follwers. Havens says his team noticed viewers were significantly more engaged during live events such as March for our Lives or the State of the Union address.

The ad format will likely be featured during other live events, such as elections, award shows or global political events, Havens says. "TicToc covers an array of scheduled live events and it's a priority for us to work closely with brand partners to identify topics or themes that matter most to them and their audience," he says.

Although viewership will be a key and obvious metric, Havens says GE will also be able to share things such as audience and engagement metrics, contextual tweets as well as impressions.

"When a rocket launches, there is a lot of time spent during the live broadcast where you are just watching the screen waiting," he says. "We saw this as an opportunity to deliver viewers with an uninterrupted, native experience from brands that would be relevant to the live event—a value-add for both the viewer and the brand without interrupting the viewing experience."