Trump warns Facebook over its plan to create a digital currency 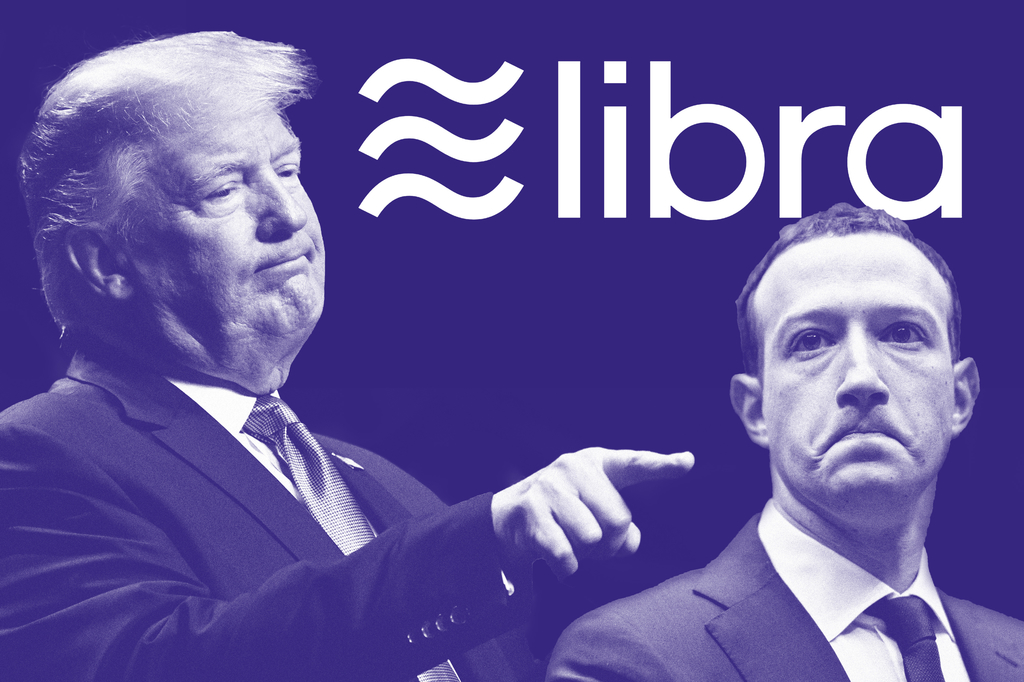 President Donald Trump on Thursday night warned Facebook over its plan to create a digital currency, the Libra, a move that poses a new obstacle to the company’s cryptocurrency ambitions.

“Facebook Libra’s ‘virtual currency’ will have little standing or dependability. If Facebook and other companies want to become a bank, they must seek a new Banking Charter and become subject to all Banking Regulations, just like other Banks,” Trump said in a series of posts on Twitter.

In the tweets, the president also expressed skepticism of digital currencies in general.

“I am not a fan of Bitcoin and other Cryptocurrencies, which are not money, and whose value is highly volatile and based on thin air,” Trump wrote. “Unregulated Crypto Assets can facilitate unlawful behavior, including drug trade and other illegal activity.”

Trump’s entrance into the debate over Bitcoin and Libra could mark a significant development for crypto enthusiasts. The White House has largely remained silent on the subject even as federal regulators like the Securities Exchange Commission, Commodity Futures Trading Commission and units of the Treasury Department have grappled with how to regulate virtual coins.

After tumbling last year, Bitcoin, the world’s most-traded cryptocurrency, has surged more than 200% in 2019.

The market reaction to Trump’s comments was muted. Bitcoin traded at $11,400 as of 10 p.m. in Washington, little changed from its level before Trump tweeted. The cryptocurrency has more than tripled this year, recovering some of its losses from a 2018 crash, as the Libra project helped revive investor interest in digital assets.

Trump’s Twitter comments add to the political heat that the world’s largest social network is already facing in Washington over its cryptocurrency agenda. Lawmakers are preparing to grill the company on Libra at two hearings scheduled for next week, and Facebook executives have been holding meetings across Capitol Hill for days to try to ease their concerns.

Trump’s remarks on Libra were posted just a few hours after a White House session on social media that was convened to discuss the grievances of conservatives that big technology companies that control social media platforms were biased against them.

Facebook has faced questions and scrutiny from regulators and politicians in both parties since it announced that it planned to enter the cryptocurrency market.

Committee Chairwoman Maxine Waters expressed concern about the social networking giant’s plans for the token and questioned Powell about the Fed’s thinking on it. Waters and others Democrats have been critical of Facebook’s strategy, and she said the company might ultimately want “to establish a parallel banking and monetary policy system” that would rival the U.S. dollar.

Facebook has said repeatedly that it plans to work with regulators to get Libra off the ground, and David Marcus, the Facebook executive who has spearheaded the Libra effort, will testify before multiple congressional committees next week.

Marcus wrote in a blog post last week that he wants to “ensure that Libra helps with the kinds of issues that the existing financial system has been fighting, notably around money laundering, terrorism financing, and more.”

So far, however, American regulators and lawmakers have mostly dithered over how to tackle the thorny issues surrounding the emergence of cryptocurrencies, like protecting consumers and keeping out criminals. But the entry of a huge company like Facebook is already forcing their hand.

Facebook was already under intense scrutiny in Washington for a series of stumbles and scandals that have many lawmakers itching for a fight. The company’s missteps include major data breaches and letting Russians hijack its platform during the 2016 election to push Trump’s candidacy.

The publication of a 12-page white paper late last month detailing the plans for Libra ignited the controversy. According to the paper, Facebook and its partners aim to launch “a simple global currency and financial infrastructure that empowers billions of people” by next year.

The virtual coin will be built on a new Blockchain infrastructure accessible from anywhere in the world. Facebook and its partners on the project have set up a non-profit organization in Switzerland to govern the payment network and will hold a reserve of bank deposits and short-term government securities that will back the coin, according to the document.

Trump’s Twitter comments drew an immediate rebuke from the Blockchain Association, which advocates for several major crypto firms in Washington. The trade association said on its Twitter page that Trump should support the industry because it will become increasingly important. "If you care about US leadership, you should support policies that support the growth of this industry *here*," the group said.