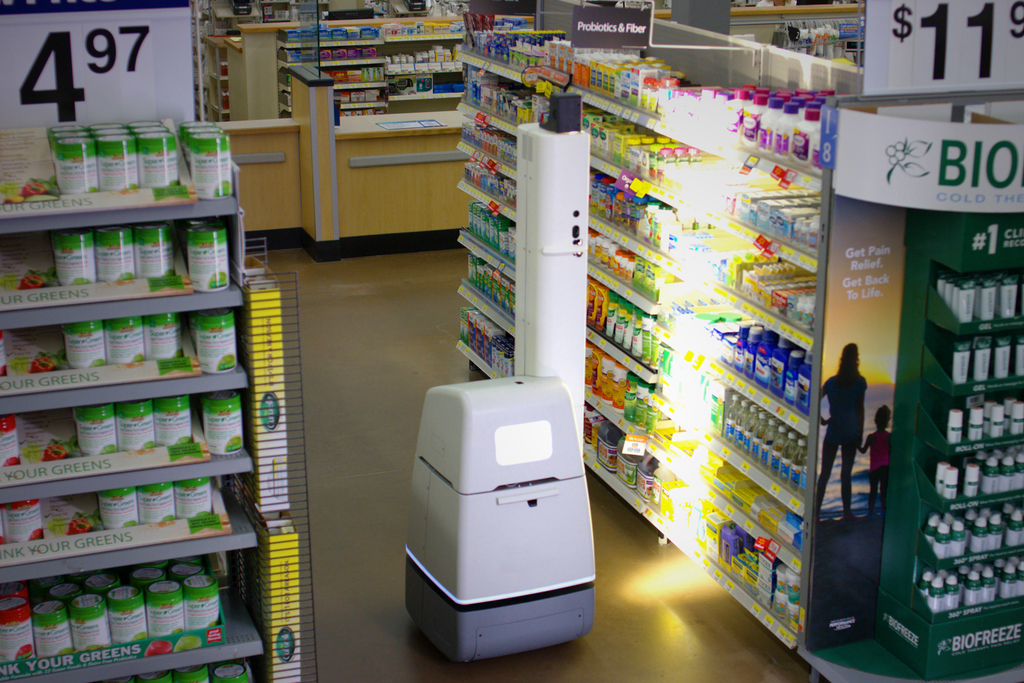 A robot at work in a Walmart store.

The world’s largest retailer will add shelf-scanning robots to 650 more U.S. stores by the end of the summer, bringing its fleet to 1,000. The six-foot-tall Bossa Nova devices, equipped with 15 cameras each, roam aisles and send alerts to store employees’  handheld devices when items are out of stock, helping to solve a vexing problem that costs retailers nearly a trillion dollars annually, according to researcher IHL Group.

Customers gawked when Walmart put the first Bossa Nova robot in a store in rural Pennsylvania in 2016. Some thought they were anti-theft devices, while others tried to talk to the bots. Kids hugged it, smearing fingerprints on the expensive cameras. Now, they’re a more common sight inside some stores, while rival robots perform tasks in the  aisles of competing grocery chains such as Giant Eagle, Schnucks and Stop & Shop.

NCR Corp., which has supplied Walmart with cash registers and self-checkout kiosks for years, will handle the installation and upkeep of the Bossa Nova machines. David Wilkinson, NCR’s senior vice president and general manager for retail, says he expects robots will be in “the majority” of Walmart’s 4,750 U.S. stores one day. But they might not all be from Bossa Nova: Walmart has also tested a shelf-scanning device made by Badger Technologies in a Kentucky store. Bossa Nova, meanwhile, has done some tests with Walmart rival Albertsons Cos.

Walmart’s Crecelius declines to give details about how much the robots have reduced out-of-stock products, saying only that the metric has improved, with the devices traveling a total of 50,000 miles, scanning a million aisles and 500 million products. Simbe Robotics, which makes a competing device, claims that its robots can cut out-of-stock items by as much as half and trim labor costs as well.

The potential savings, however, has many retail employees spooked. On message boards frequented by shelf-stockers and other rank-and-file associates, the robots are often referred to as “the job stealers,” usually with an expletive thrown in. They have reason to worry: A May report from consultants at McKinsey & Co. found that about half of all retail activities can be automated with existing technology.

Walmart, for its part, has consistently claimed that its robots lead to the redeployment of employees to less mundane roles, not job eliminations.

It’s clear, however, that the robot fleet is growing and it’s getting smarter: Bossa Nova’s newest model has an additional camera and can also look down to scan fresh produce racks, something the current crop can’t do.

It’s also a bit thinner, to help it stay out of the way of shoppers. “We’re going out of our way to get out of their way,” Bossa Nova co-founder and Chief Technology Officer Sarjoun Skaff says.