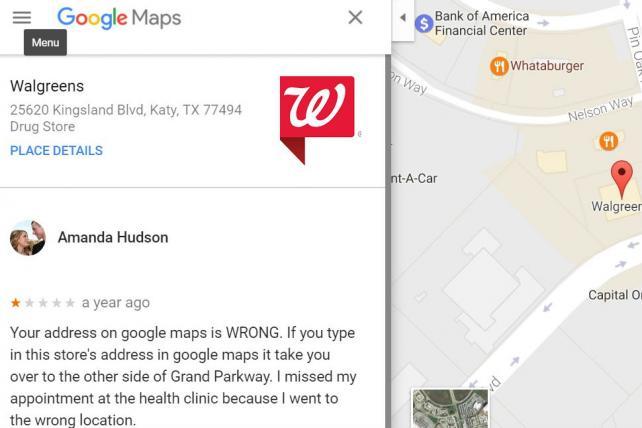 Incorrect map locations are a constant struggle for marketers.
Credit:

About a year ago Amanda Hudson missed her Walgreen's health clinic appointment because Google Maps steered her to the wrong side of Grand Parkway in Katy, Texas. She complained in a Google review and gave the store itself a terrible review for good measure.

Far from an anomaly, her experience is an everyday challenge for marketers with numerous locations. It turns out that there's a lot of shoddy information floating around online maps, mobile apps and social pages.

"Incorrect data is always a problem," said Kyle Eggleston, a senior analyst on the Walgreens search engine optimization team. "It's a constant struggle."

In the case of Hudson's missed clinic visit, the store address was correct but the map pin associated with it was misplaced, according to Eggleston.

Many companies with hundreds or thousands of locations -- like Walgreens, which has more than 8,000 stores in the U.S. -- use outside services to manage and clean up data errors such as errant map pins and hours of operation incorrectly altered by users.

"This is a problem for every single one of these organizations," said Greg Sterling, VP-strategy and insights at the Local Search Association.

Companies including Ignite Technologies, Brandify, Yext and MomentFeed are stepping in to provide services for cleaning and distributing data updates across search engines and mapping and traffic navigation tools.

Western Union has more than 50,000 outlets, many inside other businesses such as Walgreens and Kroger grocery stores. About five years ago, it worked closely with Google to produce Google Maps pins for its kiosks inside those other stores, according to Amber Hellem, senior marketing manager-U.S. digital and social media at Western Union. Ignite Technologies now sends Western Union data updates to search engines on a daily basis.

Beloved mid-Atlantic food and gas fill-up chain WaWa, known for its Hoagiefest and endless coffee selection, works with MomentFeed to get data associated with its 700 locations on point. When Wawa hired MomentFeed to verify its store location pins across Foursquare, Facebook and Google maps, it discovered 2,000 map listings and pages that were created by everyday users, including more than 1,700 duplicate listings on Facebook alone, some with incorrect data.

"There's a lot of different conflicting pieces of data in the world about your brand, about your locations," said Todd Miller, director of digital marketing at Wawa.

The company is a high-volume advertiser with several campaigns and promotions running simultaneously, including in Waze, the Google-owned crowd-sourced driving and traffic app. With all those campaigns operating and lots of misleading location data floating around, Wawa wants to make sure someone going out of her way to use a Waze coupon for a smoothie doesn't wind up driving in circles.

"The worst thing in the world we can do is push an ad to a consumer we can't pay off with," said Miller.

Waze itself works with MomentFeed to ensure business data in the app is correct. MomentFeed has a core team of sixteen data verifiers in addition to workers based in the Philippines who are dedicated to manually cleaning up location data, sometimes going so far as calling specific stores to make sure a map pin is placed at a storefront rather than two doors down, or in the center of the galleria. 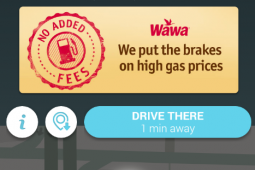 A WaWa ad in the Waze app, where the retailer has to work to keep its location data clean.

Ensuring correct location and business data for clients with hundreds or thousands of stores and restaurants is "a very difficult problem to solve at scale," said Mark Campos, product specialist at Waze.

Despite the tech vendors eager to assist in the cleanup efforts, Sterling of the Local Search Association suggested that multi-location marketers still need to do their own work by consolidating disparate and sometimes conflicting location data that exists within separate corporate departments.

"What was a big surprise for me was to discover that very often there's no central place in one of these organizations for location data," Sterling said. "My sense is that the problem isn't close to resolution."